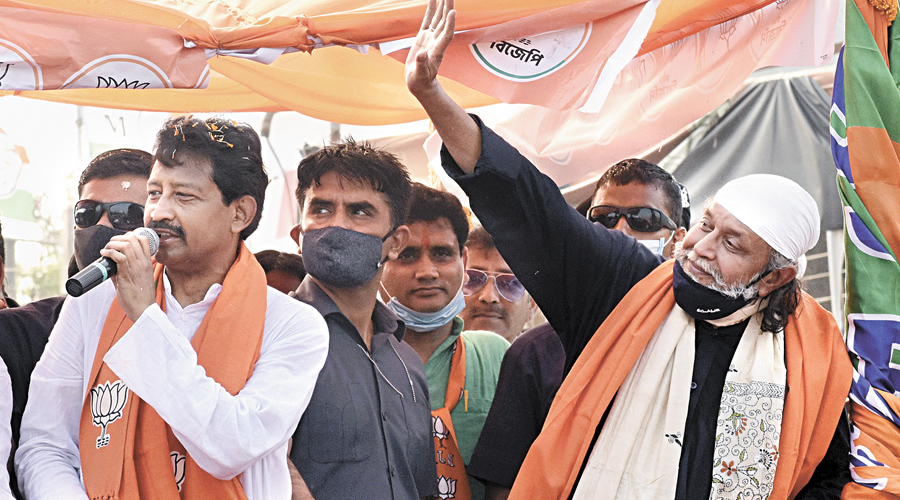 The election department of Malda dissolved midway a campaign meeting attended by actor Mithun Chakraborty on Saturday after the Trinamul Congress accused the BJP of flouting Covid-19 safety protocols.

More than 500 people — the limit prescribed by the Election Commission — reportedly gathered to see the actor at Baishnabnagar. Chakraborty was campaigning for BJP candidate Swadhin Sarkar.

Rajarshi Dutta, district magistrate and district election officer of Malda, said appropriate action had been taken after complaints were filed.  Sources said an FIR had been lodged against the organisers.

“More than 500 people gathered at the Baishnabnagar rally. This is a breach of both election guidelines and coronavirus protocols. We have demanded action against Mithun Chakraborty and the BJP,” said Trinamul vice-president Saugata Roy.

Pratap Banerjee, a state BJP vice-president and election office in-charge, said his party was abiding by the commission’s rule. “However, in some cases, people get excited and try to get a glimpse of someone like Mithun Chakraborty…. We obviously can’t tell them to go away. But we do ask them to maintain the protocols.”

A rally attended by Union minister and Tollygunge candidate Babul Supriyo at Calcutta’s Entally on Saturday, too, drew charges that the crowd count exceeded 500 and physical distancing was lax.

Supriyo said: “We had been very strict to ensure that only 200, not even 500 chairs, were placed.… Social distance was maintained between the chairs…. I know if rules are flouted, the commission will hand me a letter. But if people come out and gather around, what can I do? What was Didi’s police doing? Why weren’t they strict?”

The police now are under the Election Commission.