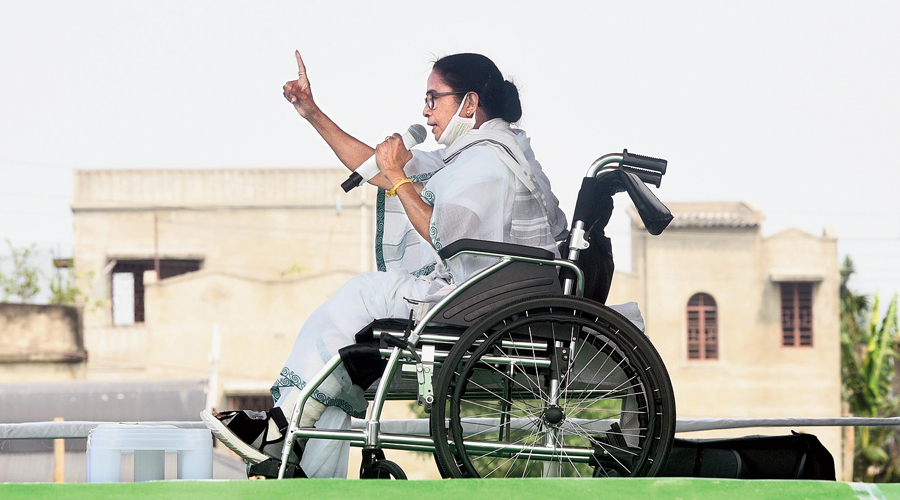 Chief minister Mamata Banerjee on Tuesday said she was worried about the occasion of Ram Navami on Wednesday, alleging that the saffron camp had plans to foment communal tension during the festival to extract electoral mileage by furthering its agenda of polarisation.

Addressing a rally in Murshidabad’s Jiaganj on Tuesday afternoon, she said: “Tomorrow is Ram Navami. I am worried about the day because the BJP has a plan to create a riot…. We will resist the efforts (of the BJP).... I request you not to be provoked by anyone. You please observe Ram Navami and Ramazan simultaneously in peace and harmony.”

“Please be careful. Hindus and Muslims, we both have to continue to live as brothers,” added the Trinamul Congress chief in the course of her 30-minute address.

Sources said Mamata’s alert came as an ostensible warning to the people of the Murshidabad Assembly constituency, which is one of the three constituencies with a Hindu majority, out of 22 in the otherwise Muslim majority district. It is also the only Assembly segment in the district where the BJP had a lead — of 3,399 — in the 2019 Lok Sabha polls.

“The BJP can do anything, including triggering an actual riot, to win elections. The BJP is on the backfoot in many Hindu-majority seats across Bengal, even in places it led in 2019, as many voters swung back to Trinamul in the past two years…. The BJP, therefore, is desperate to achieve immense polarisation as 114 crucial seats remain,” said a Trinamul leader in Murshidabad.

A section of Trinamul leaders said Mamata had started alerting people to be careful against provocation by the BJP on Ram Navami with reference to the riot that was reported from Asansol following a Ram Navami rally in 2018.

Owing to the pandemic’s second wave, most major constituents of the saffron ecosystem, including the Visva Hindu Parishad and the Hindu Jagran Manch, have announced cancellation of all processions and mass gatherings on Ram Navami.

“However, we have been permitted to organise a puja for Lord Ram in every neighbourhood. However, we will have no control if unorganised groups take out their own rallies,” said a senior RSS leader.

“The allegations being levelled are baseless. There will be no provocation from our end,” she added.

Sources said several saffron wing units had decided to decorate the area with large festoons and cutouts of Ram and Hanuman.