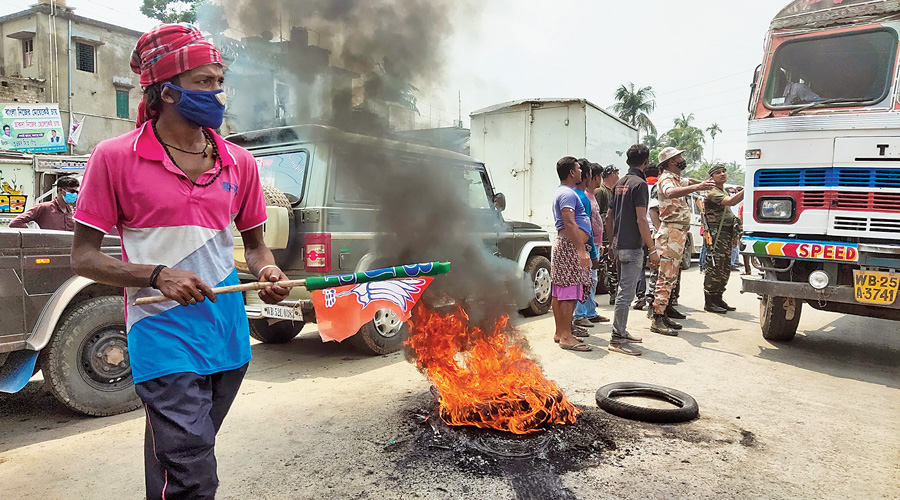 A BJP worker was killed allegedly by those suspected to have links with the Trinamul Congress at Chakdah in Nadia district early on Sunday morning, less than 10 hours after polls had concluded in the area.

Dilip Kirtaniya, 38, a booth-level BJP worker and a carpenter, was found dead in the courtyard of his home at Enayatpur in the town with severe injuries to his abdominal region.

Police sources said preliminary investigation indicated that assailants had thrashed Kirtaniya when he had gone out early morning to attend to nature’s call.

His mother reportedly spotted him lying dead on the courtyard when she opened the door around 5am. Kirtaniya was rushed to Chakdah state general hospital, barely 2 km away, where he was declared brought-dead.

A doctor at the hospital said: “The victim’s testicles were thrashed by the assailants and were bleeding profusely.”

The police later sent the body to JNM Hospital in Kalayni for the autopsy. Kirtaniya was a popular Matua leader at the locality.

The victim’s elder brother, Biplab Kirtania, said: “He was murdered by miscreants of Trinamul. They had threatened my brother a number of times during the voting on Saturday. He had earned their wrath for escorting voters to the polling station, since many of them, who are BJP supporters, were afraid to go to the booth in the face of threats from Trinamul miscreants.”

“Last night, they called out my brother late at night. But he did not go. However, it appears they were waiting outside and attacked him when he went out to attend nature’s call a few hours later,” Biplab added.

Family sources claimed that miscreants had threatened Dilip on many times in the past one week asking him to leave the BJP. On the day of the Lok Sabha polls in 2019, miscreants with Trinamul links had beaten up him for daring to cast his vote in spite of their threats.

In his police complaint, Biplab has named nine Trinamul workers.

Angry BJP supporters ransacked the home of one of the suspects. Later, led by BJP MP Jagannath Sarkar and Chakdah candidate Bankim Ghosh, party workers besieged the Chakdah police station for about three hours. They also blocked NH12 for four hours and tracks at the Palpara railway station for an hour.

Trinamul’s Chakdah candidate Subhankar Singh, however, denied the allegations. “The deceased was not a very influential person. I have requested police to find out the cause behind the murder”.

BJP’s Chakdah candidate Bankim Ghosh said: “Dilip was a very enthusiastic party worker. I talked to him yesterday when he assured me of ensuring a comfortable lead for me in his area. It is quite unimaginable that Trinamul could kill him in such a way.”

A senior police officer at Chakdah said: “All possible aspects behind the murder are being examined, including the activities of the accused persons. We are hopeful of nabbing the culprits soon.”