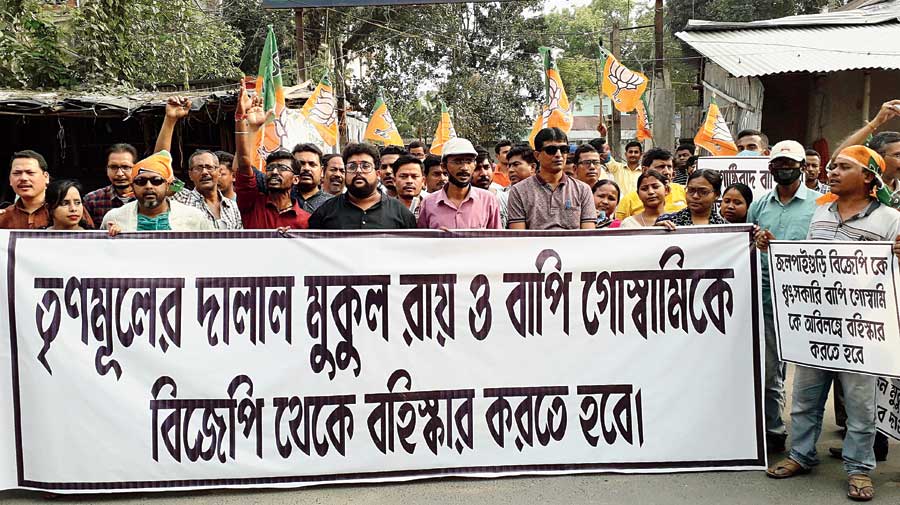 BJP supporters demonstrate in front of the Jalpaiguri district party office, demanding expulsion of some leaders
Pictures by Biplab Basak and Kousik Sen
Our Bureau   |   Siliguri   |   Published 20.03.21, 03:20 AM

Protests and ransacking of party offices by BJP supporters agitated over nominees in certain Assembly seats were witnessed in a number of areas of north Bengal even on Friday, though party leaders are trying to placate the demonstrators.

In the course of the protests, demands were raised to expel senior party functionaries of the districts and the state, and accusations were levelled at a number of BJP leaders, including Union minister of state Debasree Chaudhuri for allegedly depriving genuine candidates.

In Jalpaiguri town, some BJP supporters ransacked the district office on Thursday and set fire to publicity materials. On Friday, they assembled in front of the office, carrying placards and banners with demands like the expulsion of party leader Mukul Roy and Jalpaiguri district BJP president Bapi Goswami. They also held a protest march in the town.

“We want our senior leader Dipen Pramanik for the Jalpaiguri seat. It is surprising that the party fielded Soujit Singha who people don’t know. Also, we have reservations about Raiganj candidate. Our protests will continue till the party makes a decision. We suspect some district leaders, in connivance with some central and state leaders, have made the decisions to deprive genuine candidates,” said Amit Roy, a leader of Bharatiya Janata Yuva Morcha. 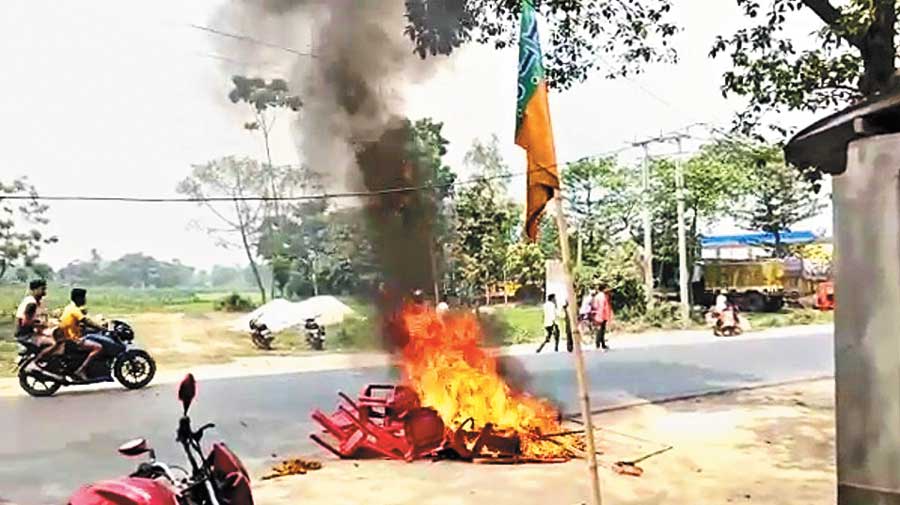 BJP supporters burn furniture and publicity materials in front of the party office in Karandighi of North Dinajpur on Friday.

Soujit Singha, the BJP candidate of Jalpaiguri who is a lawyer, called the protests “temporary outbursts.”

“Such protests indicate that thousands of people are with the BJP in Jalpaiguri and many want to contest the elections. They should realise that there is only one Assembly seat. The problems would be over soon,” said Singha.

Similar protests were witnessed in Raiganj and Malda towns where the district BJP offices were ransacked by protesters who turned up from many Assembly constituencies, demanding the nominees be changed immediately.

In Raiganj, party supporters based in Itahar and Hemtabad blocks reached the office, resorted to demonstrations, ransacked the furniture, threw away documents and publicity materials and abused district leaders.

On Friday, BJP supporters assembled in front of the party office in Karandighi. They took out furniture, banners and posters and set them on fire.

“Debasree Chaudhuri (the BJP MP of Raiganj and the Union minister of state for women and child development) has indulged in corruption and selected some people who lack support base and credibility as candidates. We want to make it clear that no turncoat should be put in the candidate list. Why is the party depriving those struggling for years to establish the BJP’s base in the district” said an irate BJP supporter.

Biswajit Lahiri, the district BJP president of North Dinajpur, admitted that party supporters were aggrieved with the list of candidates.

“We are trying to resolve the issue but it will surely take time. Many people are calling me up and I am tell them that I have no role in candidate selection,” said Lahiri.

MP Chaudhuri said party supporters should maintain restraint. “Thousands of people are joining our party. In such a situation, there may be grievances but there is no point in doing any activity that can affect the party’s image,” she said over phone.