Since May this year, five former Left councillors have joined TMC, sources said 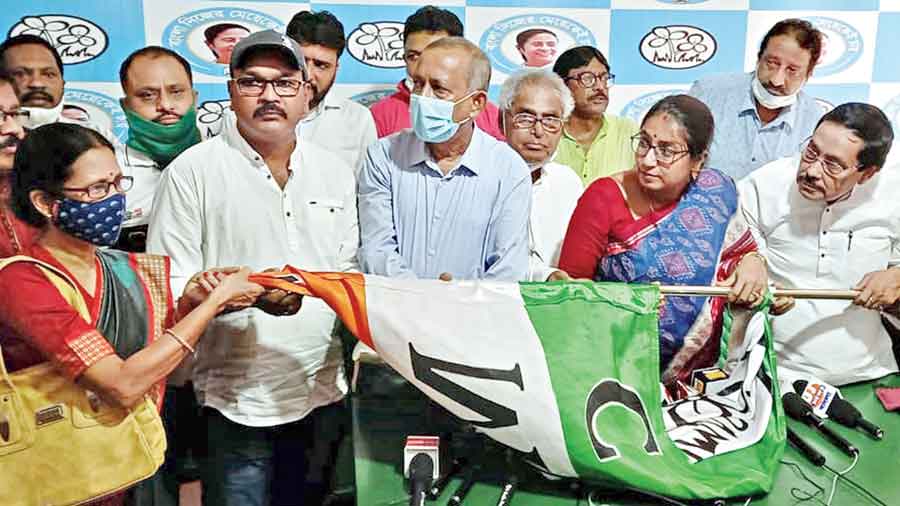 (From left) New entrants Sharmila Das and Tapas Chatterjee with Gautam Deb and the Trinamul flag.
Passang Yolmo
Our Correspondent   |   Siliguri   |   Published 22.09.21, 01:41 AM

Two senior former councillors of the CPM, who are popular faces of the party in Siliguri, on Tuesday went to the district Trinamul office and joined the party.

Sharmila Das, former councillor of ward 28 in Siliguri Municipal Corporation (SMC), and Tapas Chatterjee, the immediate past councillor of ward 32, were welcomed in Mamata Banerjee’s party by Darjeeling (plains) district president Papiya Ghosh and veteran leader and chairperson of the SMC board of administrators Gautam Deb.

Since May this year, five former Left councillors have joined Trinamul, sources said.

“Many leaders and workers from other political parties and some apolitical faces have approached us and intend to join Trinamul. We are, however, inducting them only after consent from the state leadership,” said Deb.

Trinamul insiders said the party wants to consolidate its base by getting Left leaders and supporters on board.

In Bengal, Siliguri subdivision has been one of the last bastions of the Left. Till last year, the Left were in power in both SMC and the Siliguri Mahakuma Parishad (SMP). Till Assembly polls this summer, veteran CPM leader Asok Bhattacharya was the MLA.

Time and again, Trinamul leaders had expressed surprise as to why, despite a series of development work done across the subdivision by the Mamata Banerjee government since 2011, the party has failed to secure a majority in the SMC and SMP.

“During past couple of years, BJP managed to develop its base in and around the city. Also, the Left still has some supporters. That is why on one hand, our leaders working in the board of administrators are focusing on development at the civic body, and on the other hand, we are exploring options to get more and more people from other parties, including the Left, on our side,” said a party leader.

The presence of former councillors, who know their wards and localities of the city, would help Trinamul, he pointed out.

These former councillors apart, Dipak Seal, a former district general secretary of Trinamul in Siliguri who had defected to BJP ahead of the Assembly elections, re-joined the party on Tuesday.