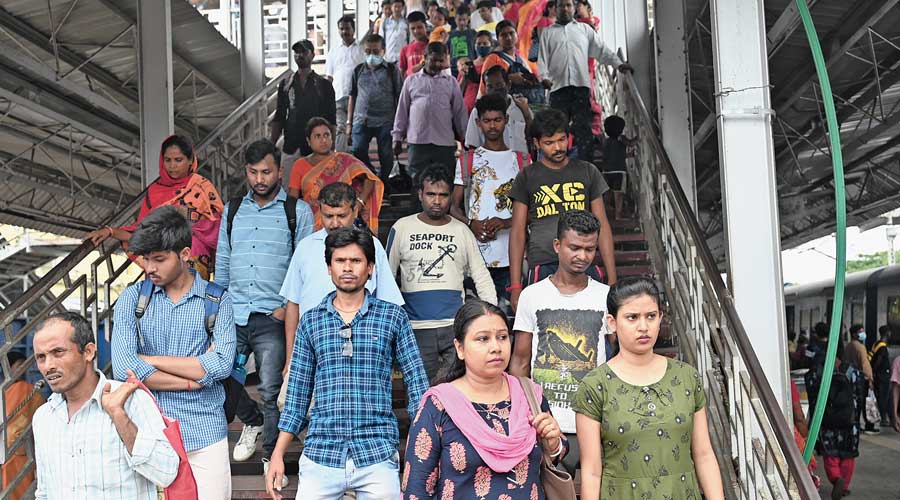 A steady rise in Covid-19 patients in Bengal has prompted the state government to direct district officials to enforce safety protocols, including mask-wearing and hand-sanitisation, resume door-to-door surveys and step up vaccination.

Experts say the current rise in infections is likely due to opportunities for the virus to spread as people have largely abandoned masks and physical distancing and due to waning immunity among people who were fully vaccinated last year but haven’t taken boosters yet.

The pace of booster uptake in the population in India has been far slower than it could have been. Up to Wednesday, more than 817 million -- over 90 per cent of adults -- had been fully vaccinated. But less than 48 million people have opted for boosters.

The Bengal government has ordered door-to-door visits particularly in districts that have reported high numbers of infections such as North and South 24-Parganas, Birbhum and Malda.

Over the next few weeks, 60,000-odd trained Accredited Social Health Activists (Asha) will try to identify people with Covid-19 symptoms as well as those with severe acute respiratory illness or influenza-like illness.

“This model of surveys was suggested by Nobel laureate economist Abhijit Vinayak Banerjee to the chief minister, and implemented by us (the state government) first in the summer of 2020,” a senior health official said.

He said the door-to-door visits needed to be resumed because even symptomatic people were showing no urgency about getting tested.

The government has also decided to renew the database of reports on the health of those in home isolation.

Several health officials from the districts said people this time were not as fearful of Covid-19 as they had been through 2020 or during last year's devastating second wave, or even during the omicron surge at this year's beginning.

“This absence of fear has made the situation difficult,” a district official in East Burdwan said, adding that the administration might have to seek police help to get people to mask up.

The state government has directed each block hospital to immediately earmark at least four beds for Covid-19 patients as a first step. Sub-divisional and district hospitals are to set aside 50 and 100 beds, respectively.

The state government has advised an intensification of the vaccination drive in areas with higher infection figures, especially Calcutta and its immediate neighbourhood.

"Those yet to receive their second or booster dose must be encouraged to get it now," a health official said. "There's a definite decline in popular interest and initiative."