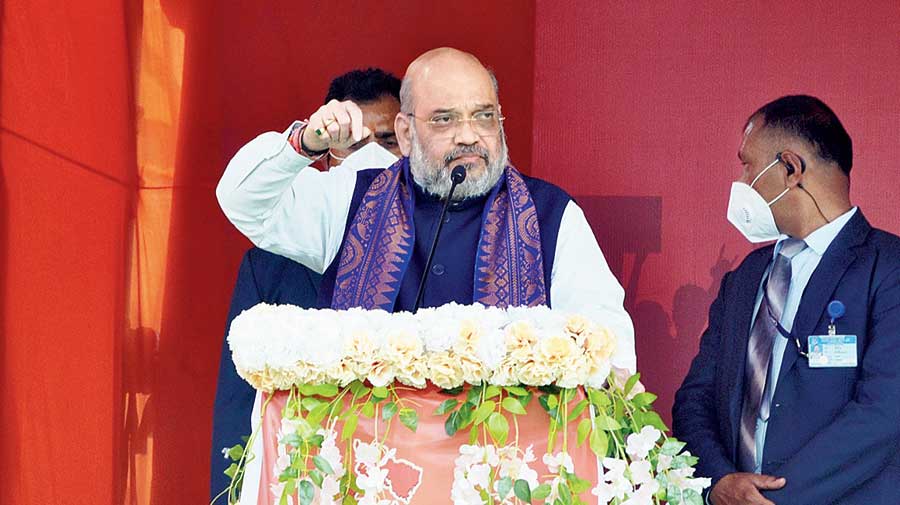 Union home minister Amit Shah on Thursday made several promises to woo Rajbanshis, which included formation of a battalion in the name of the erstwhile princely state of Cooch Behar in central paramilitary forces (CPMF), a Rs 500 crore cultural centre for the community and a Rs 250 crore statue of social reformer Panchanan Barma.

He made the announcements for the community whose votes could swing results in half of 54 Assembly seats in north Bengal at a public meeting here.

“The Narayani Sena (of the Cooch Behar kings) had staved off the aggressive Mughals and tales of their valour are known even in the far-flung Gujarat. That is why we have decided to form a Narayani battalion in central paramilitary forces. A training centre of these forces would be named after Chila Roy,” the home minister said.

Chila Roy or Sukladhwaj, the younger brother of king Naranarayan, was the fiercest fighter of the Cooch Behar royal family.

For several years, Cooch Behar residents, especially the Rajbanshi community, have been demanding the creation of a battalion in the name of Narayani Sena in defence forces.

Last year, chief minister Mamata Banerjee, who is desperate to win back the support of Rajbanshis as a majority of them sided with the saffron camp, had announced creation of a Narayani battalion in the Bengal police. The headquarters of the battalion will be set up in Mekhliganj of Cooch Behar, she had said.

“It seems BJP leaders have understood the pulse and that is why the home minister came up with the announcement of a similar battalion in the CPMF,” said a political analyst.

Addressing a gathering of around 50,000 people at the Rashmela Ground, Shah also announced that the Centre would spend Rs 500 crore to raise a cultural centre for Rajbanshis and Rs 250 crore to build a new statue of Panchanan Burma, both in Cooch Behar.

“We will also develop a national level tourist circuit covering prominent temples and heritage properties of Cooch Behar,” he said.

Before landing in Cooch Behar, Shah went to Bongaon in the neighbouring Assam and met Ananta Maharaj, a leader of the Greater Cooch Behar People’s Association.

Ananta, who represents a faction in the association — the other one is headed by Bangshibadan Burman who has lent his support to Mamata — is from Cooch Behar but lives in Assam. Ananta Maharaj enjoys considerable clout among Rajbanshis.

After the public meeting, the BJP leader flagged off the tableaux of the party’s Parivartan Yatra in north Bengal. Then, he went to Madanmohan temple (established by the Cooch Behar royals) and offered a puja.

Before leaving Cooch Behar, the home minister paid homage to the statue of Panchanan Barma in the town.

In his speech, Shah spoke against infiltration from Bangladesh, an issue that had been flagged time and again by the Rajbanshi community.

“As I met Ananta Maharaj and reached here, I saw settlements and realised that infiltration is an important issue here. The Trinamul government can’t stop the infiltration. Once we are voted to power, even a bird cannot infiltrate through the (Bangladesh) border,” he said.