On his second trip to Bengal in a month, Narendra Modi was in Hooghly to inaugurate railway and Metro projects 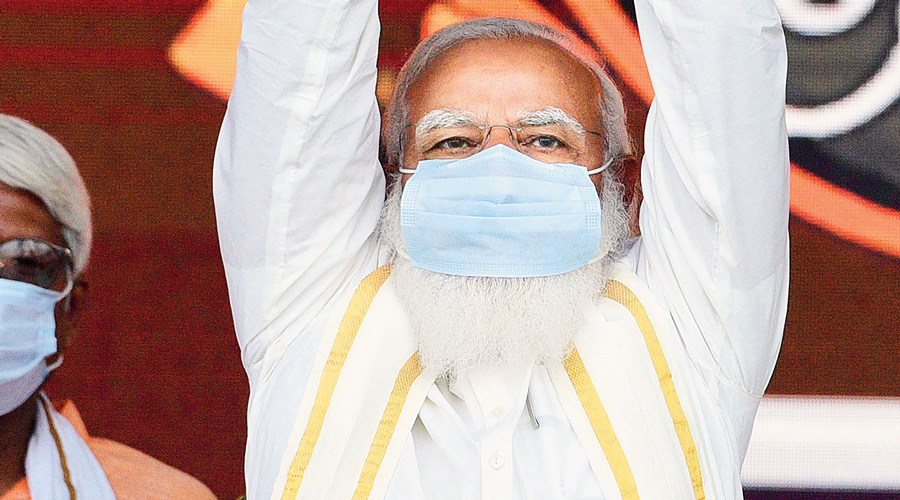 Prime Minister Narendra Modi on Monday accused the Mamata Banerjee government of indulging in appeasement politics and preventing traditional customs like Durga Puja, falling back on the polarisation narrative.

“This kind of politics (tushtikaran or appeasement) strengthens the vote bank over nationalism, appeasement over development for all,” Modi told a rally on the Dunlop ground at Sahagunje in Hooghly district.

Modi’s thrust appeared to be part of a concerted attempt with multiple BJP leaders flagging issues such as Rohingya refugees or adding a communal colour to a reference to even Bangabandhu Sheikh Mujibur Rahman, either conveniently forgetting or blissfully ignorant of history.

On his second trip to Bengal in a month, the Prime Minister was in Hooghly to inaugurate railway and Metro projects.

Before the railway programme, he addressed the public meeting at which he said the people of Bengal had made up their mind to bring about “asal paribartan (real change)” in the state.

Modi promised reindustrialisation without mentioning any specifics and rolled out a litany of alleged lapses by the Mamata Banerjee government.

The appeasement question came up while Modi was saying that Vande Mataram Bhavan in Hooghly, which was the residence of Bankim Chandra Chattopadhyay for five years, had not been properly looked after. Modi went on to allege that the Trinamul government’s politics of appeasement was the reason for the lack of care for the building associated with the “Vande Mataram” call.

“This politics stops the people of Bengal from celebrating Durga Puja, stops them from immersion (of the goddess).… The people of Bengal will not forgive those who have insulted their traditions for the sake of vote bank politics,” Modi told a crowd of over 1.5 lakh.

“Today I want to assure you that when the BJP comes to power in Bengal... there will be development for all and appeasement for none.”

The BJP has long been seeking to milk a notification issued in 2017 by the Bengal government that suspended the immersion of Durga idols on September 30 and October 1 on account of Muharram, observed by Muslims as a day of mourning.

The decision, driven by goodwill and an eagerness to minimise potential flashpoints because both events involve processions, has been amplified by the Right-wing ecosystem as an example of appeasement.

However, even BJP leaders concede in private that the scale and scope of celebrations during Durga Puja have grown exponentially under Trinamul rule with the active patronage of the ruling party. The Mamata government had announced Rs 50,000 each for nearly 37,000 community Durga Pujas last year to help them stay on course in spite of a pandemic-induced funds crunch.

It is against this backdrop that Modi has raked up the Durga Puja charge. Many BJP leaders believe that polarising voters along religious lines is their best bet in Bengal. At several internal meetings, BJP leaders have placed reports that they can win 200 seats in the Bengal Assembly polls if the voters are polarised.

Even a reference to Sheikh Mujibur Rahman, whose status as Bangabandhu had always overshadowed his religious identity, is now being spun to give it a communal hue.

BJP IT cell chief and co-observer for Bengal Amit Malviya criticised Mamata for saying on Sunday at a programme to observe International Mother Language Day that even if she is jailed, she will fight from there -- like Bangabandhu. The Father of the Nation in Bangladesh had led the freedom struggle from behind bars in Pakistan.

Perhaps unaware of the role language had played in the creation of Bangladesh, Malviya tweeted: “Y’day Pishi said, like Bangabondhu (Sheikh Mujibur Rehman) she would fight from jail and win. Why doesn’t Pishi want to fight like Netaji or Aurobindo or Rasbehari Bose or Khudiram? Mujibur created Bangladesh, what does she want? Or is there a message for her Muslim vote bank?”

February 21 is observed as International Mother Language Day at the initiative of Bangladesh, which uses the occasion to commemorate the martyrs of the Language Movement of 1952 in what was then East Pakistan.