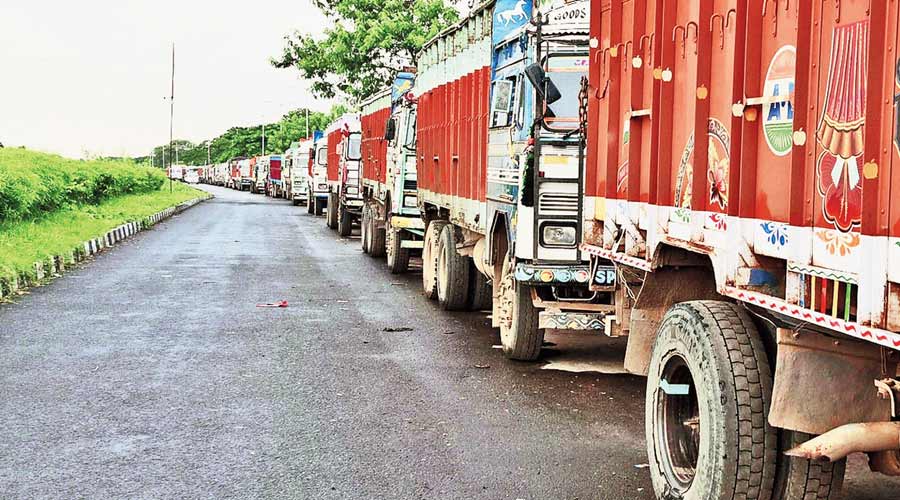 From September 26, the district administration has decided to launch “Suvidha,” an online portal system for vehicle management that has been introduced by the government for seamless movement of vehicles through the border.
File photo
Soumya De Sarkar   |   Malda   |   Published 23.09.22, 02:57 AM

Exporters based in Malda have expressed discontent over the rates fixed by the state government for the new online system for management of vehicles which move through the land ports of the state to Bangladesh.

Malda has a transit route to Bangladesh via Mahadipur, which is one of the prominent land ports in north Bengal.

From September 26, the district administration has decided to launch “Suvidha,” an online portal system for vehicle management that has been introduced by the government for seamless movement of vehicles through the border.

The system has already become operational at Petrapole and at Ghojadanga. Nitin Singhnaia, the district magistrate of Malda, said the portal would be beneficial for exporters as their trucks loaded with goods would not have to wait at the border for an indefinite period before entering Bangladesh.

“Any exporter can log in to the portal and can book a trip for a vehicle. He would be provided with a pass with a specific date and timeslot when he can send the truck to Bangladesh. It would save their money and time and would also ensure a smooth vehicular movement through the border,” said Singhania.

This is where the exporters and the clearing and forwarding agents have flagged their protests. The Mahadipur Exporters’Association (MEA) has already registered their objection with the administration.“We are at the wit’s end with this portal. If the administration is bent on introducing this portal and wants to make it mandatory for the exporters, we will decide our next course of action,” said Hridai Ghosh, an executive committee member of MEA.

Fajlul Haque, the working president of MEA said that they would soon send a delegation to the administration and to the state government to explain how this portal would put them in soup.

He explained that for trucks loaded with goods, they pay Rs 140 per day as the parking fee at the border.

“Trucks carrying fruits, vegetables and other perishable goods do not need to wait at the border and are allowed to cross over to Bangladesh. Rice, wheat, maize laden trucks wait for barely seven days and an exporter of those goods altogether has to spend around 1,000 rupees for a week’s time, after which the vehicles head for Bangladesh,” said Haque.

“Those trucks carrying stone chips and other non-perishable items enter the neighbouring country in a fortnight’s time. The parking fee for even 15 days is much lesser than the charge that the state would charge from us,” added Haque.

A trade union affiliated to the RSP on Wednesday urged Union labour minister Bhupendra Yadav to conduct a systematic survey and study on migrant workers, including those who lost their jobs during the series of lockdowns following the Covid-19 pandemic, in a bid to get them back in the workforce as soon as possible.