'Around 5,000 houses have been damaged and the entire town is reeling from outage' 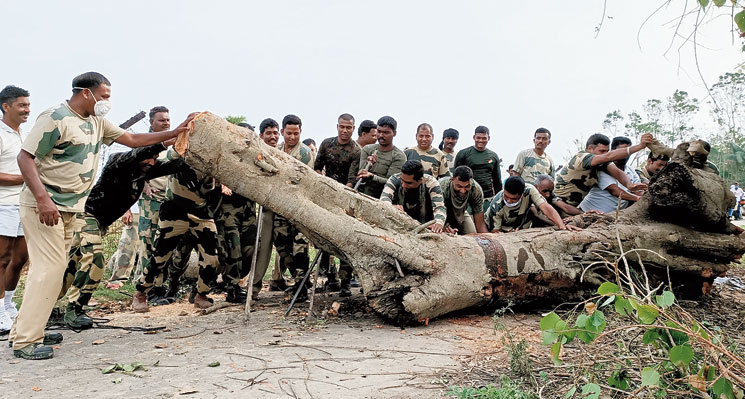 Officials said Wednesday’s damage inflicted on at least a dozen blocks in the two districts had added to the pain a week after Cyclone Amphan had caused widespread destruction.

The storm that clocked nearly 100kmph turned killer for Abdul Mannan Mondal, 63, a resident of Bongaon’s Goaldaha village in North 24-Parganas. Mondal was at his cowshed when the storm hit and a tree crashed through the roof killing him.

Meher Ali, 42, a farmer of Mallikpur village of Haroa, was killed when an old boundary wall collapsed on him.

Lalmohan Roy Gupta, 42, a farmer at Haraditya village of Arambagh, died when the branch of a tree fell on his house in the storm. The branch hit him on the head while he was trying to remove it, said a police source.

“Around 5,000 houses have been damaged and the entire town is reeling from outage. The power department is trying to restore electricity,” said Swapan Nandi, administrator of Arambagh municipality.

“Arambagh and its adjoining areas have been affected badly by the storm. The destruction in a few areas is similar to what Amphan did elsewhere. We are assessing the damage. Electricity will be restored soon,” Rao said.