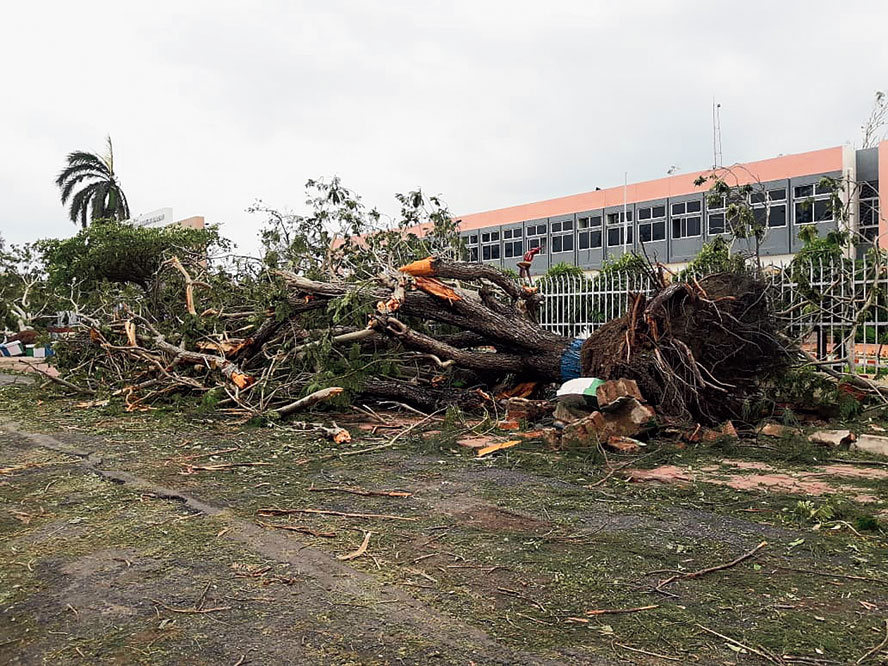 Industrialists in Haldia are concerned about the possible environmental impact of the devastation caused by Cyclone Amphan in the near future because of the loss of a large number of trees that had been planted to curb the industry town’s high pollution levels.

The cyclone has uprooted nearly 10 lakh trees in the port town, including in the industry-run “green belt” and the government-managed “river belt”.

“We are worried because of the sheer number of trees that have either been damaged or uprooted. We are in the process of clearing the area now, but the absence of trees in such huge numbers might lead to an increase in the pollution levels. We will have to take steps,” Haldia Petrochemicals general manager Debasis Sen said.

The divisional forest officer of East Midnapore, Swagata Das, said that according to preliminary estimates, the township had lost 5-10 lakh trees of varying sizes.

In 2010, the central environment ministry had imposed a moratorium on the setting up of new industries in Haldia owing to extremely high pollution levels. The ban was withdrawn in 2013 after extensive tree-plantation drives by 50-odd major industries in the area that had led to a significant drop in pollution levels.

Sources said nearly 50 lakh trees had been planted after the embargo had been imposed in 2010. Last week’s extensive loss of tree cover has prompted industries to consider another tree plantation drive if pollution levels are to be controlled.

“We are worried about the implications of the loss of tree cover,” said Nandakumar Mistri, an engineer at Haldia refinery.

Sources said the main damage had occurred on the 10km stretch along the Haldi river, portions of which are manned by the coast guard. Trees on the 20km stretch between Geonkhali and Haldia township along the Hooghly river have been uprooted in large numbers.

“The mangrove portions were not damaged. But a large stretch near the town, from Balughata to Haldia township, has lost its tree buffer,” said a town officials, adding that coconut, mango, jamun, teak and resin trees had been uprooted in large numbers.

This week, sources in the state pollution department termed the situation “serious”.

“Haldia is an important hub for the state. Because of the large presence of industries, pollution is normal. But we had planted a tree cover for that,” said water resources minister Somen Mahapatra.

“We will take steps, including planting five crore trees, a lot of them in Haldia,” he added.