As volunteers or police were outnumbered by the crowd, several officials in South 24-Parganas admitted that adherence to the protocol had become difficult 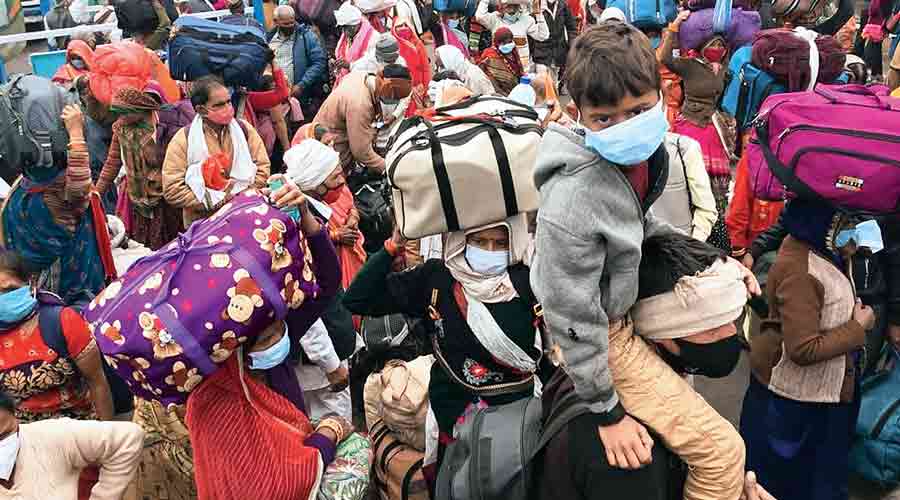 Compliance with Covid-19 protocols were put to test as pilgrims in large numbers breached pandemic-related restrictions to gather at multiple boarding points for buses and vessels en route to Gangasagar Mela in South 24-Parganas on Wednesday.

As volunteers or police were outnumbered by the crowd on Wednesday, several officials in South 24-Parganas admitted that adherence to the protocol had become difficult and health experts feared the rush might trigger further rise in Covid cases.

While the pilgrims were seen jostling to board vessels through the narrow channel at Lot 8 and when boarding buses in Kachuberia, the slackness in managing crowd become visible raising doubts about the capability of the administration that allowed entry to the island on production of double vaccine certificate.

The breach of Covid protocol was not restricted to the gateways to the fair but also on Sagar Island on Wednesday evening when the police and civic volunteers had to disperse a huge crowd when about 100 dhakis performed.

The crowd turned unruly and jostled on the beach that eventually prompted the police to intervene. The incident led to pointing of fingers at the Gangasagar Mela organising committee for holding an event that caused embarrassment to the administration that is trying to comply with Calcutta High Court’s order directing them to strictly maintain Covid protocols.

Although district magistrate of South 24-Parganas P. Ulaganathan did not respond to calls from this correspondent on Wednesday evening, several senior officials admitted incident was had embarrassed the authorities.

A government doctor present at the fair said on condition of anonymity that the such breach of Covid protocols would led to further spread of the infection. “We are helpless, the administration must crack the whip,” he said.

Even though only around 8,000 pilgrims had entered the island on Wednesday, the administration had to allow those possessing double vaccination certificates as officials said they were unable to put in place in a short time the infrastructure required to check or carry out RTPCR tests on such a large number of tourists as per the high court’s ruling.

“We cannot keep so many pilgrims waiting and had to allow entry to those carrying double vaccination certificates,” a senior official of the South 24-Parganas district administration said.

Speaking to The Telegraph, block development officer of Sagar, Sudipto Mondal, said: "We are trying our best to ensure all possible protective measures and implement the high court order."

"We are screening the body temperature of pilgrims even after they have landed at the island. We are also carrying out rapid antigen tests of suspected persons and sending samples for RTPCR test if required," the BDO said while refuting charges of violation of Covid protocols at boarding points.

"We have ensured not more than 50 persons gathered at any point. Police and civic volunteers are there to ensure it. But lack of awareness among people often creates problems despite our best efforts," Mondal added.

The administration, however, heaved a sigh of relief as footfall at the fair has been low than what was expected.

“The real test will come on the auspicious occasion of Makar Sankranti when pilgrims will take the holy dip. So far, the crowd has been far less than what was expected,” said an official posted at the island.

Earlier in the day, speaking to The Telegraph Ulaganathan had sounded optimistic about managing the crowd.

“We are fully prepared to handle the situation. We have sufficient police and civic volunteers who will ensure access control and barricading at vulnerable points to minimise crowd. At the same time our health care team is also ready to face any situation."

A source in the administration said that during the past three days around 40,000 pilgrims had arrived at the island. Most of the pilgrims returned after offering prayers at the Kapil Muni temple, the source added.

The DM said that expecting a huge rush in the coming two days, the administration has made arrangements to manage the crowd.

"We have arranged over 2,500 buses and prepared 21 boarding jetties of which nine are permanent structures. At the same time, 32 large vessels have been arranged for transportation of pilgrims while over 100 ferries have been kept on stand-by," Ulaganathan said.

At another part of the district, police district authorities organised a day-long rapid antigen test on the advice of Diamond Harbour MP Abhishek Banerjee. The tests were confined to the Diamon Harbour police district.

"We had set us 266 test kiosks and also conducted door-to-door test and also deployed mobile test vans. Around 52,203 rapid tests were conducted throughout the day of which 1,151 persons tested positive in the police district," Diamond Harbour police chief Avijit Banerjee said.