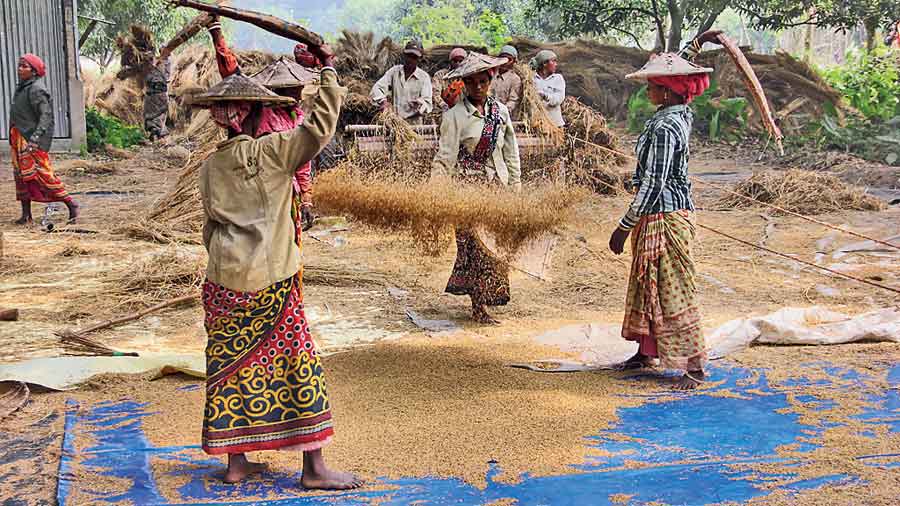 The new system will come into effect from November, just before the harvesting of kharif (monsoon) crop.
File Picture
Snehamoy Chakraborty   |   Calcutta   |   Published 28.09.22, 12:26 AM

The Mamata Banerjee government has introduced a new online system to enable farmers to fix a date convenient for them to sell paddy at the government’s procurement centres at a minimum support price (MSP).

The new system will come into effect from November, just before the harvesting of kharif (monsoon) crop, said a source.

The move, officials said, is significant as it could resolve a long-standing problem that the farmers had been facing for years while selling their produce to the government.

“Now, the farmers can set a date according to their convenient time to sell off their produce. Earlier, the farmers used to complain that they were given a date three months after harvesting their produce by the officials manning the procurement centres,” said a bureaucrat.

“As a result, many of the farmers had to go for distress sell as they could not hold back their produce for such a long period,” he added.

The new system can also be an effective tool to redress the grievances of the farmers that only those who have strong political backing get earlier dates to sell off their produce.

The initiative, sources said, was initiated after the chief minister had pulled up officials on receiving complaints that farmers were not being able to sell their produce despite visiting the procurement centres.

At an administrative review meeting in Bankura on May 31, Mamata read out letters that she had received from farmers who had complained to her office that they had failed to sell their paddy even after visiting the procurement centres multiple times.

According to the new system, a farmer has to register on the online portal to get a registration number. Then, he or she has to log in to the self-scheduling window, using OTP (one-time password) received on the registered mobile number.Then, he or she would be able to fix a preferable date from the available dates on the portal at any one of the procurement centres in his or her district to sell off his or her produce.

A section of the officials said that the system may sound easy but it is tough for a farmer to complete the registration on the portal given the digital divide in the rural areas. “I am not sure how many of the 70 lakh odd farmers will be able to avail themselves of the facility. So, introducing the online system alone will not solve the problem,” said a source.