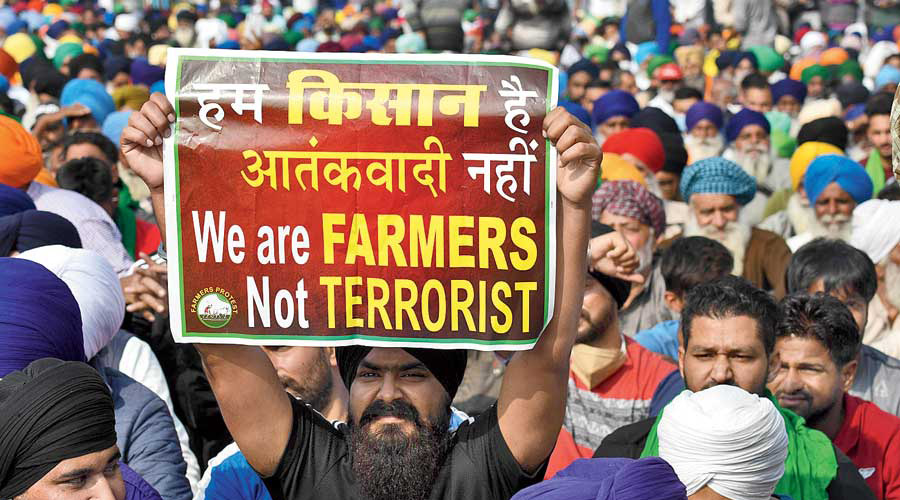 Sources said the Mamata Banerjee dispensation had verified the farmers’ claims and uploaded their  names on the Union government’s portal for the particular scheme under which Rs Rs 6,000 is provided to each applicant.
PTI
Pranesh Sarkar   |   Calcutta   |   Published 04.08.21, 02:49 AM

The Centre has apparently rejected 9.5 lakh Bengal farmers’ applications for the PM-Kisan scheme, prompting the state government to write to Delhi asking for the reasons for their exclusion.

Sources said the Mamata Banerjee dispensation had verified the farmers’ claims and uploaded their  names on the Union government’s portal for the particular scheme under which Rs Rs 6,000 is provided to each applicant.

“Officially, the Centre’s portal is showing that data are pending for the correction for 9.5 lakh farmers. But the fact is  that these farmers have been excluded from the scheme,” said a state government official.

In a communication to Delhi, the Bengal government stressed that the central doles should be extended to all 45 lakh farmers whose names were uploaded by the state.

“The state government has sent a letter a few days ago asking for the reasons behind the decision of omitting the names of about 9.5 lakh farmers from the central scheme. We have also demanded that the benefit be given to all the farmers whose names we had uploaded. We are yet to get any response,” said Pradip Majumdar, the agriculture advisor to chief minister Mamata Banerjee.

Sources said the state government had already uploaded the names of 44,89,831 farmers on the central portal for their inclusion in the PM-Kisan scheme.

“Remaining 10 lakh farmers’ names were in the process of being verified... We have demanded that the benefit be extended to all the applicants when fresh installments are released in August. As things stand now, only 24.31 lakh farmers will get the money

in August. In the letter, the state government conveyed its displeasure to the Centre over the omission of about 9.5 lakh farmers’ names,” said a source.

Under the PM-Kisan scheme, the Centre disburses Rs 6,000 each in three installments to the farmers annually.

As Delhi made it apparent that all the farmers would not be considered for the benefit, the state government would put pressure on the Centre as the issue has political implications as well.

The Bengal government has a similar scheme, Krishak Bandhu, wherein 62 lakh farmers get a maximum of Rs 10,000 for an acre annually.

“We have no exclusion criteria for the scheme. This is why we could extend the financial support to 62 lakh farmers, but because of the conditional approach of the Centre, names of only 44.89 lakh farmers could be uploaded,” said a source.

As the Centre does not provide the support to share-croppers and those who get pensions from the government, nearly 20 lakh farmers could not apply for the PM-Kisan scheme. Now, the number of beneficiaries from the state under the central scheme has declined further after 9.5 lakh applications were rejected .

“If they were excluded for issues like mismatch in Aadhaar or bank-related data, the state would take initiatives to rectify those. But it is annoying that the Centre is not letting us know the reasons behind the rejections,” said another source.

It appears the state would soon raise the issue in public to derive political dividends as the Narendra Modi government had earlier accused the Mamata administration of not cooperating with the Centre.

“It is now clear the BJP talks about the farmers’ benefits only to gain political benefits. But our government is trying to extend benefits to the farmers and that’s why there are no exclusion criteria in our scheme,” said Majumdar.

The sources said the initial letter had been written at the secretary level and if the Centre didn’t reply within a few days, the issue could be taken up by the chief minister or the chief secretary.