Debris dumped on riverbed to aid movement of machinery 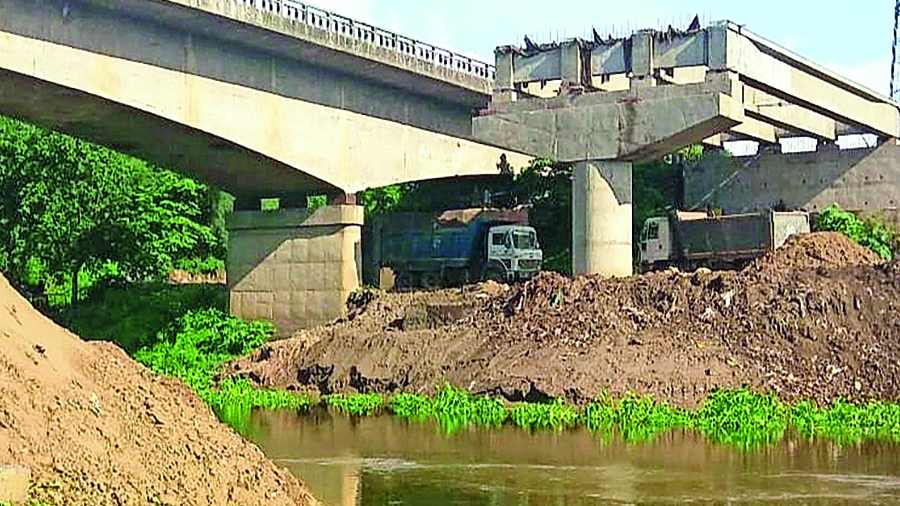 Construction of bridge over Churni river underway as a part of the NH12 widening in Nadia has led to debris being dumped on the riverbed
Sourced by The Telegraph
Subhasish Chaudhuri   |   Kalyani   |   Published 14.07.22, 01:24 AM

Construction of a bridge over river Churni as a part of the NH12 widening project has almost blocked the course of the river in Nadia’s Ranaghat, prompting environment activists to lodge a complaint with the National Highways Authority of India and the Union ministry of road transport and highways.

The agency entrusted with the four-laning work of NH12 has been accused of filling up the riverbed with earth and debris, blocking the natural flow so that cranes can come on the riverbed to lift — technically “launch” — the concrete girders or main support structures and rest them on the piers of the bridge.

What has angered nature lovers is the manner in which earth has been dumped on the once 50-metre-wide river to narrow it down to only 10 metres now.

Both NHAI authorities and the executing agency have promised to restore the river course to what it was but members of the Churni-Mathabhanga Nadi Kalyan Parishad are unconvinced. They said the debris can’t be removed fully and the river will turn narrow permanently.

Accusing the NHAI and the construction agency of executing the work in an “unscientific manner”, Parishad vice-president Bibartan Bhattacharyya said: “It is unbelievable that a central government organisation has been blocking the river’s course adopting a wrong technique. It is practically impossible to restore the river’s course by removing dumped debris. The present flow of the river will keep pushing the debris further down, raising its riverbed, and critically impact its flow.”

Churni river to becoming narrow
Sourced by The Telegraph

“In recent past, we have seen how such filling of the riverbed to build two railway bridges ruined both Churni and Ichamati rivers at other places in Nadia,” he added.

The Churni river is a distributary of the Mathabhanga river which flows out of the Padma river and enters India from Bangladesh at Pabakhali in Nadia. In the absence of any rejuvenation work for decades and several encroachments, Churni has been in bad shape for years. Members of the Parishad feel that the blocking to build the bridge would ruin its course permanently.

The NHAI took up the four-laning work between Krishnagar and Baro-Jagulia (64 km) stretch in October 2019. It entrusted Gurgaon-based KCC Buildcon to execute the Rs 1,113-crore project within 30 months that includes the bridge over the Churni apart from two flyovers, four railway overbridges and seven footbridges.

The girder bridge over the Churni uses piers embedded in the river to support the deck. Construction of piers has led to the digging of the river. Debris is dumped on the riverbed, alleged sources.

Raju Kumar, the project director of the NHAI’s Krishnanagar project implementation unit, said “earth filling” on the riverbed was a “temporary measure” to create “base” for movement of machinery like cranes.

Kumar said: “We need a base to launch the girders as the existing riverbed is not strong enough to take the load. Moreover, the river’s course on the stretch is very narrow. So, we have taken up earth filling as a temporary measure to prepare the base. Once girders are launched, earth filling will be cleared.”

The river will get back its normal course within a month, he said.

However, organisations like the Parishad and the Mathabhanga-Churni River Rescue Committee differed.

“The NHAI should have insisted the executing agency use an alternative way,” a Parishad member said.

Kumar said: “If the Churni river had a deep water level, we could have done so.”

A site engineer of KCC Buildcon said: “We areexecuting the work according to the work schedule given by the NHAI. We do not have an independent role here."