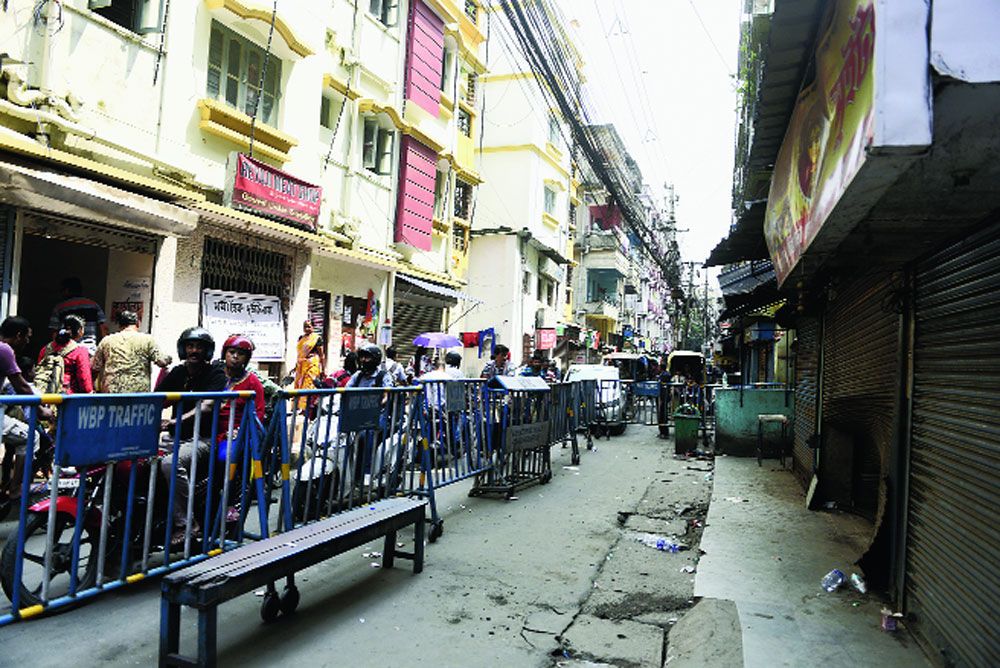 The Criminal Investigation Department on Thursday questioned a woman and a man in an attempt to piece together the events leading to the Tuesday morning explosion in Nagerbazar’s Kazipara.

Jamuna Mondal, quizzed during the day, is the sister of fruit-seller Ajit Halder, 45, who had his back spilt open under the impact of the blast. Rajen Rajvar, the other person sleuths talked to, escaped with minor injuries.

The explosion, in front of the godown of a popular sweet shop, had ripped through the congested locality and killed an eight-year-old boy and left several persons injured.

Jamuna, who runs a fruit stall around 500m from the spot where his brother had his stall, said officers sought to know what she had seen while setting up her stall on Tuesday morning.

“I told the officers that we had reached Kazipara in a taxi around 6.45am. I had swept the pavement in front of the godown but did not see any bag that morning,” Jamuna, a resident of Durgapur in South 24-Parganas, told Metro.

“I helped my brother set up his stall and then took some fruits to my stall. My brother called me up at 8.30am asking me to send him some pineapples. I asked a rickshaw-puller to take some to him. The rickshaw-puller returned from the spot and said my brother had been injured in the blast,” recounted Jamuna.

As for Rajvar, a member of the housekeeping team of a diagnostic unit located near the explosion spot, an officer said: “His workplace is on Jessore Road. It’s not clear why he had entered the narrow road off Jessore Road.”

Officers who visited the spot several times after the explosion said whoever had planted the bomb at the spot did not possibly want to execute the blast.

“It appears the blast took place accidentally. It is possible the improvised explosive device was being handled negligently and fell off someone’s hand, causing the blast,” a CID officer said.

According to another officer of the investigating agency, the person who was carrying the bomb or had planted it might be among the injured.

After examining the remnants of the explosives, the sleuths have come to know that an eight-inch iron pipe of four-inch diameter and one-mm thickness was used to make the bomb.

“Most of the splinters first hit the concrete roof over the blast site and then the shops across the road. The other end of the iron pipe was not damaged,” said an officer.

A team from Dum Dum police station recorded the statements of shopkeepers in the area on Thursday.

“I told the officers that I was rolling up the shutters of my shop when I heard a deafening sound. The items on the shelves fell in a cloud of dust,” said Ratan Jaiswal, who runs a hardware store a stone’s throw from the blast site.

Sleuths said they would examine the call record details of the cellphones of the injured.