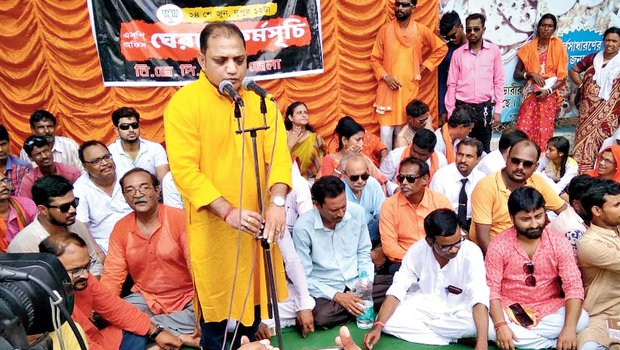 Raju Banerjee said: “We have already informed Lalbazar about our programme. They are yet to give us permission in writing, either for the rally or the public meeting at Shyambazar. We are going to hold it anyway.”
Telegraph file picture
A Staff Reporter   |   Calcutta   |   Published 22.12.19, 07:31 PM

The BJP has said it will carry on with the march in support of the Citizenship (Amendment) Act in Calcutta on Monday with or without police permission and deploy volunteers to avoid violence during the precession.

BJP Bengal general-secretary Raju Banerjee said on Sunday that there would be “extra” caution, especially around statues, along the party’s national working president J.P. Nadda’s proposed route from Wellington Square to Shyambazar.

Alleged BJP workers had gone on the rampage at the Vidyasagar College hostel on Bidhan Sarani in Calcutta during a road-show by national party chief Amit Shah in Calcutta on May 15. A bust of Bengal renaissance icon Ishwarchandra Vidyasagar was busted by the vandals then.

“We don’t want his (Shah’s) successor’s first major rally (in Calcutta) to get spoilt like that,” a state BJP functionary said on Sunday. Banerjee said all statues of eminent personalities would be garlanded along the route of Nadda’s Abhinandan Yatra (congratulatory march) from midday on Monday.

“We are extra cautious this time and won’t allow Trinamul miscreants to cause disturbances to our peaceful rally and give us a bad name. We have decided to deploy adequate special volunteers to keep a watch so that no outsider fuels tension,” said Banerjee.

Asked whether Calcutta Police had given permission for the march, Banerjee said: “We have already informed Lalbazar about our programme. They are yet to give us permission in writing, either for the rally or the public meeting at Shyambazar. We are going to hold it anyway.”

A senior Calcutta police officer has refused to divulge whether permission was granted to the BJP. “Whatever is the police’s decision will be communicated to them in due course,” said the officer.

Siddiqullah Chowdhury, Jamiat Ulema-e-Hind state chief and a member of the Mamata Banerjee cabinet, on Sunday threatened to prevent Union home minister Amit Shah from stepping out of the airport whenever he visited Calcutta unless the CAA was withdrawn.

In a rally by the organisation against the CAA in Calcutta, Chowdhury said: “We could stop him (Shah) from stepping out of the airport, if need be.”

“We could gather one lakh people there to stop him,” added the state library services minister. “We do not believe in violence, in violent protests. But we will, for sure, oppose the CAA and the NRC with all we’ve got.”