Rally was organised by the Joint Forum Against NRC, a civil society platform 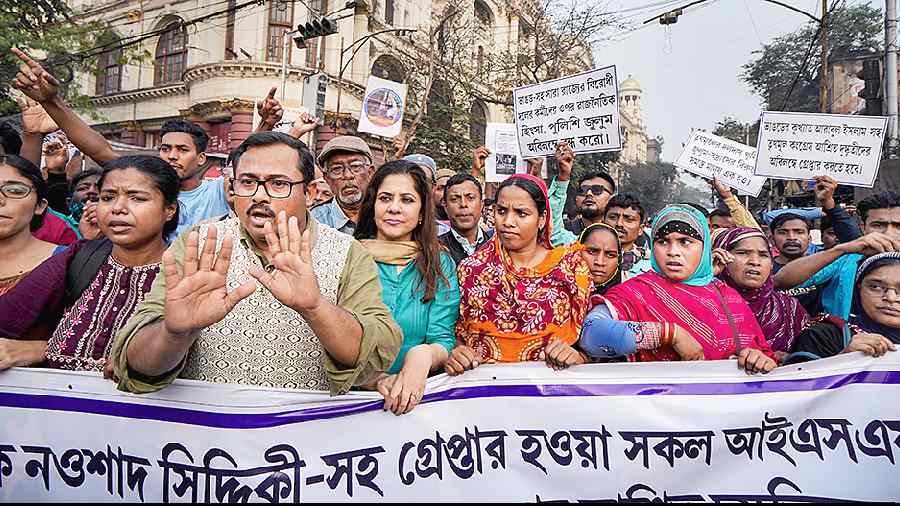 The rally demanding the immediate release of the ISF leaders from police custody in Calcutta on Wednesday
PTI
Arkamoy Datta Majumdar   |   Calcutta   |   Published 26.01.23, 04:45 AM

Members of multiple political and apolitical outfits took part in a rally without holding their banners in Calcutta on Wednesday to protest against the arrest of Indian Secular Front MLA Nawsad Siddique and “attempts to crack down on the Opposition” in Bengal.

The rally was organised by the Joint Forum Against NRC, a civil society platform, and was the first of its kind in recent memory as members of different political parties took part in the march without their flags.

The organisers claimed that around 6,000 people joined the programme, while police put the number at 3,000.

“This rally is not only in solidarity with Siddique and ISF activists who have been arrested. Democracy is in peril in the state today. The police are acting as the agents of the ruling dispensation. We want to raise our voice against the administration’s attempts to crack down on the Opposition,” said Prasenjit Bose, the convener of the Forum.

Siddique, the ISF MLA of Bhangar, and 17 other party members had been arrested by Calcutta police on Saturday.

Speaker after speaker at Wednesday’s rally dubbed those arrests “unlawful”. They said the police should have actually arrested goons allegedly backed by Trinamul at Bhangar, who had tried to prevent the “peaceful” ISF supporters from attending Saturday’s rally.

Since Friday night, Trinamul and ISF supporters had clashed at Bhangar over an event organised by the ISF to celebrate its foundation day. In protest against Trinamul’s alleged attack on them, ISF supporters and the MLA were demonstrating in Calcutta on Saturday when a pitched battle had broken out.

The police had said the protestors had resorted to stone pelting in which several policemen had been injured.

“Even if stones were hurled, the incident must be thoroughly investigated first. The law enforcers can’t arrest people randomly,” said rights activist and CPM leader Saira Shah Halim, who participated in Wednesday’s rally.

“He (Siddique) is an elected representative. Were all procedures duly followed before arresting him? If a lawmaker can be manhandled by the police like this, how will the common man survive?” Halim asked.

The rally, Bose said, was an attempt to send out a message to the Trinamul establishment that its policy of throttling dissent was not liked by people.

“Ordinary people from minority-dominated areas like Bhangar and other parts of North 24-Parganas and South 24-Parganas spontaneously came to take part in the programme (today).... The turnout would have been higher had police not stopped buses travelling to Calcutta from Bhangar since early morning,” said Bose.