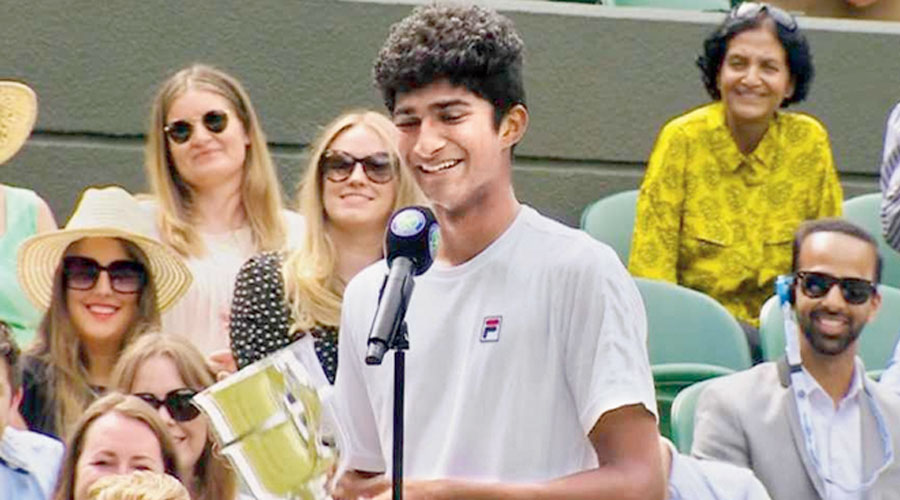 Playing the right shots at the right moment and ensuring he held his nerves to deal with the pressure of a final, Samir Banerjee achieved his goal.

The 17-year-old, an American of Indian origin and Bengali descent, brushed aside compatriot Victor Lilov 7-5, 6-3 to emerge the junior Wimbledon champion on Sunday.

It took Banerjee 82 minutes to attain glory in what was only his second grand slam tournament at the junior level. But the control he had over the game and the maturity he showed point towards brighter prospects.

“I wasn’t sure if I could compete at this level after losing early in the (junior) French Open. But I played a tournament at Roehampton (ITF world juniors’ meet) next and I would say that helped me shape up well,” an elated Banerjee told The Telegraph while watching his idol Novak Djokovic win a record-equalling 20th grand slam title.

“For me, it was about taking one game at a time and I just kept backing my strengths,” Banerjee added.

As for Indians and players of Indian origin winning junior grand slam singles titles, Yuki Bhambri was the last to achieve such a feat when he triumphed at the 2009 Australian Open. Sumit Nagal won the Wimbledon boys’ doubles title in 2015 with Vietnam’s Ly Hoang Nam.

Agreed, Banerjee was born and brought up in the US and cannot speak Bengali. But India and Calcutta are not alien to him or his family.

“I’ve been to India and Calcutta on quite a few occasions in the past. I’ve even trained at the South Club courts back in 2015 and some relatives also stay in Calcutta. So yeah, I do have roots in Calcutta and it’s obviously a good part of this success,” Banerjee said.

Alongside playing college tennis for the Columbia University in New York where he will also be studying economics, political science and public policy, Banerjee’s main focus now is the US National Hardcourt Championship (for juniors) in August.

“The winner will get a wild card for the seniors’ US Open, so I’m looking forward to it,” Banerjee said.

Balancing academics and tennis could be quite a task for Banerjee, who has trained with India’s Prajnesh Gunneswaran and Sriram Balaji at the tennis academy of former German player Alexander Waske in Frankfurt. But the youngster is game for the challenge.