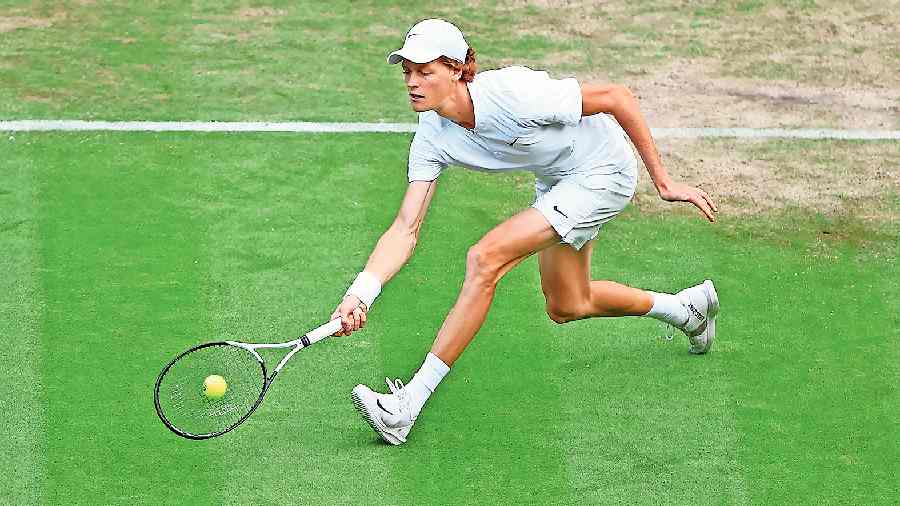 Italian Jannik Sinner enjoyed a day to remember on his Centre Court debut as he toppled fifth seed Carlos Alcaraz with a barnstorming 6-1, 6-4, 6-7(8), 6-3 win in a battle of young-guns to reach the Wimbledon quarter-finals for the first time.

On a day when Wimbledon’s most famous stage celebrated its centenary, the two youngest players left in the men’s draw gave a glimpse of the future with some breathtaking shot-making that earned them a standing ovation from 15,000 hollering fans.

However, during the first two sets there was little indication of the spellbinding drama that would end up unfolding on Centre Court.

The highly-rated Spaniard Alcaraz, who has won a Tour-leading four titles this year, was sucked into a Sinner whirlwind as he lost seven games in a row from 1-1 in the first set.

The 19-year-old Spaniard recovered from that setback to deny Sinner two match points in the third-set tie-break before three more went begging with Alcaraz serving at 5-2 down in the fourth.

But Sinner withstood the barrage of belting winners to finally book his place in the last eight at his sixth attempt when Alcaraz rolled a forehand into the net.

Left-hander Norrie is the only local hope surviving at the grasscourt major and for a place in Friday’s semi-finals he will meet Belgian David Goffin, who earlier edged American 23rd seed Frances Tiafoe 7-6 (3), 5-7, 5-7, 6-4, 7-5.

Ons Jabeur’s hopes of becoming the first African to lift the Rosewater Dish gathered momentum as she edged out Belgian Elise Mertens 7-6 (9), 6-4 in a topsy-turvy encounter to reach the Wimbledon quarter-finals for the second year running.

The second-ranked Tunisian, the only seed left in the bottom half of the women’s draw, has been the form player over the opening week of the grasscourt championships as she reached the last eight without dropping a set.

Mertens, however, was no pushover during the contest as she earned five set points during a marathon first-set tie-break.

But once Jabeur produced the firepower to wriggle out of trouble, she raised her game in the second set and wrapped up the win when Mertens surrendered with a double fault.

Since knocking out American seventh seed Danielle Collins in the opening round, the 23-year-old Bouzkova has grown from strength to strength at the grasscourt grand slam where she had never previously got past the second round.

The 66th-ranked Czech had won her only previous match on grass against Garcia who was considered a contender to win Wimbledon this year after her title run at Bad Homburg and a wide open women’s draw.

Germany’s Tatjana Maria continued her dream run when she fought from a set down and saved two match points to beat former French Open champion Jelena Ostapenko 5-7, 7-5, 7-5 to reach the quarter finals of a grand slam for the first time.

It was the biggest career victory for the mother of two who returned to action from maternity leave just under a year ago and she will play Jule Niemeier in the last eight.

Maria, who was ranked outside the top 250 in March, said the victory was especially sweet given her breaks from the game. “It makes me so proud to be a mum, that’s the best feeling in the world,” she said in an on-court interview.

“I love my two kids... to be able to do this together... It makes it really special.”

Maria, at 34 the oldest player left in the women’s draw, had impressed in her stunning straight sets-victory over fifth seed Maria Sakkari in the previous round and she hit back from 1-4 down in the next set before forcing a decider.

Niemeier, 22, used her big serve and skilled net play to great effect, appearing completely at ease despite the Centre Court crowd’s clear support for Watson, who looked tight and anxious.

The Indo-Croatian pair of Sania Mirza and Mate Pavic advanced to the quarter finals of the mixed doubles event after their second-round opponents Ivan Dodig and Latisha Chan gave a walkover.

Sania and Pavic had beaten Spain’s David Vega Hernandez and Georgia’s Natela Dzalamidze 6-4, 3-6, 7-6 (3) in the first round.