Naseem youngest to get Test hat-trick 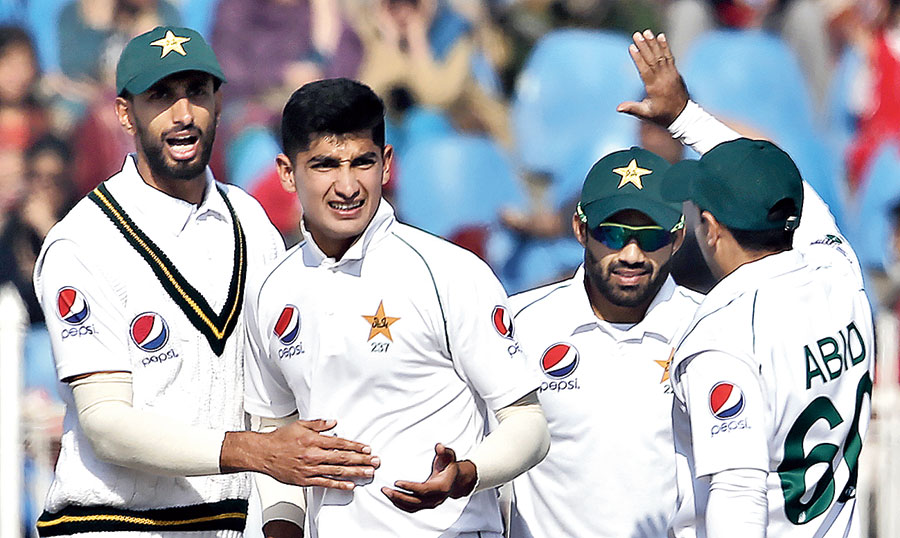 Teenage pacer Naseem Shah became the youngest player to record a Test hat-trick as Pakistan closed in on victory against Bangladesh here on Sunday.

Just when Bangladesh seemed to have fought their way back into the match at 124/2 minutes before stumps on Day III, Naseem destroyed them with three wickets off successive deliveries.

Aged 16 years and 359 days, he becomes the youngest player to record a Test hat-trick, besting Bangladeshi Alok Kapali who achieved the feat aged 19 in 2003. Naseem trapped Najmul Hossain Shanto leg-before off the fourth ball of his seventh over for 38, then followed up with dismissals of Taijul Islam (also leg-before) and Mahmudullah (caught) with the next two deliveries. Naseem had figures of 4/26 before he left the field with a shoulder injury.

Shanto and Mominul Haque, unbeaten on 37 at the close, had added 71 for the third wicket after they lost Saif Hassan on 16 and Tamim Iqbal on 34. At stumps, Bangladesh were 126/6 and needed another 86 runs to avoid an innings defeat with two more days to play.

Naseem is also the youngest fast bowler and second bowler overall to take five wickets in a Test innings.

He achieved that feat at 16 years and 307 days against Sri Lanka in Karachi last year.

Pakistan were bowled out for 445 in their first innings with Babar Azam scoring 143 and Haris Sohail 75.

Earlier, Pakistan lost seven wickets either side of lunch.