Mushfiqur takes it to Day 3 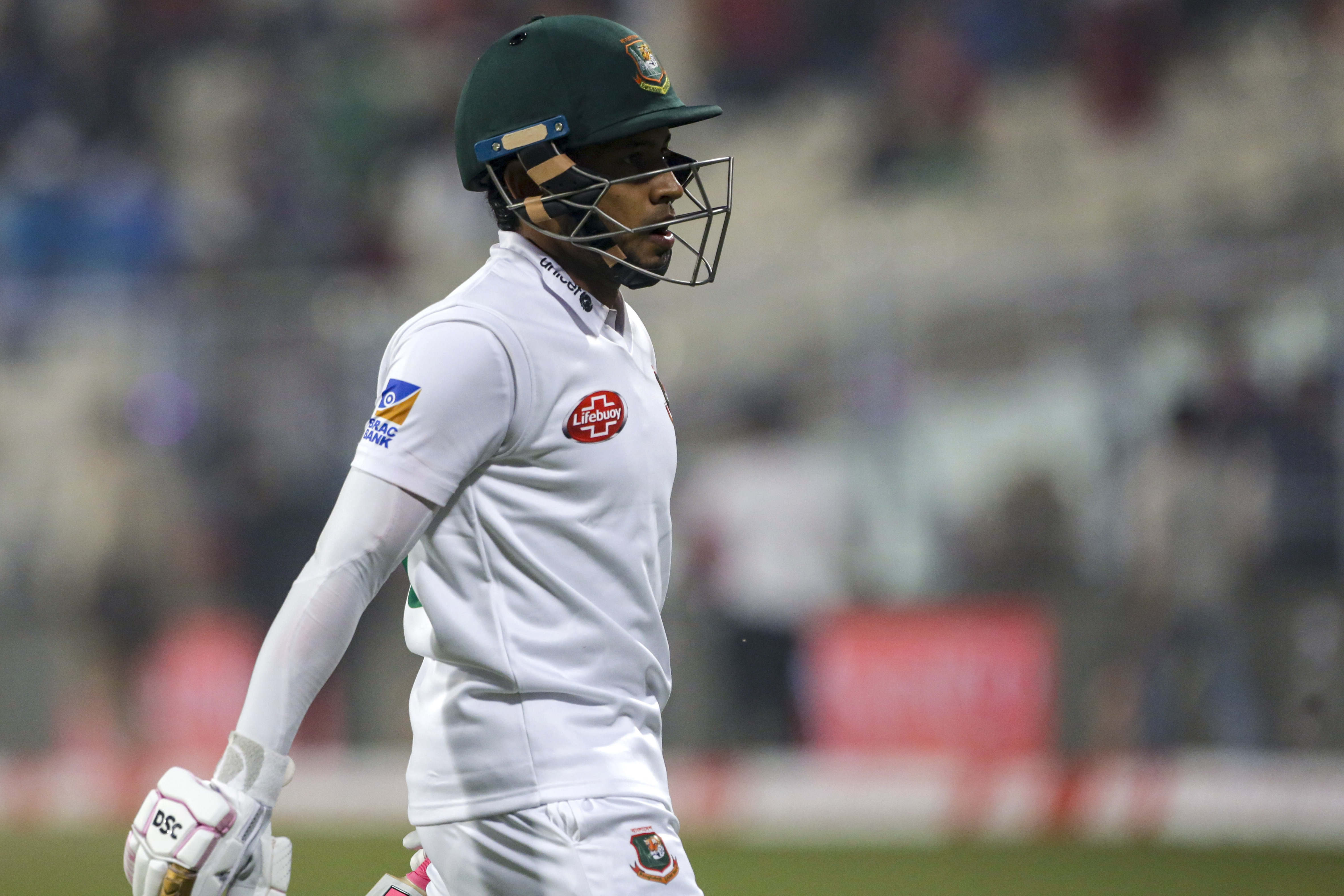 For most of the final session of play at Eden Gardens on Saturday, the buzz across the ground was whether the Test would drift into the third day.

Such has been Bangladesh’s performance that even their cricket Board reportedly dropped plans of flying in an additional player if needed as concussion substitute.

Flexibility and adaptability have been regarded as key elements of top-class players, and the Day-Night Test will bolster that. First, Virat Kohli showed why he is regarded as the best with an innings of supreme authority.

Then Ishant Sharma and the rest of the Indian pacers almost blew Bangladesh away before Mushfiqur Rahim decided to drop anchor and keep them afloat. At stumps they were 152 for six in the second innings, still trailing by 89 runs after India declared at 347 for nine.

The Indian pace trio once again spit fire as Bangladesh began their second innings, needing 241 runs to make India bat again. The visitors were flagging badly, being reduced to 13 for four

in the seventh over, and the absence of any red-blooded contest may have forced many in the stands to depart before the close.

Worse still, many ticket-holders waited tantalisingly unaware whether the third day’s action would unfold. Thanks to Mushfiqur’s unbeaten 59, they can enjoy their share of the cake on Sunday afternoon.

The experienced Rahim defied everything the Indians threw at him with steely determination during his second half-century of the series. Bangladesh were lucky they didn’t need a third concussion substitute in the Test after Mohammad Mithun was hit on the head by an express Ishant delivery.

Mithun was declared fit to bat but the psychological scars left by the injury resulted in his dismissal a few balls later. That was not the only instance the physio’s attention was needed as he probably spent more time on the field than some of their top-order batsmen.

Mushfiqur and Mahmudullah’s partnership gave Bangladesh some hope of forcing the game beyond the second day before a pulled hamstring forced the latter to retire hurt.

The wicket was expected to be at its flattest in the first session and the India captain was prudent to capitalise. Having come to the crease on the first evening itself, Virat played with increasing confidence. The ability to adjust to the conditions always sets him apart. Continuing his dominance, he made batting look effortless.

What were the Bangladesh batsmen thinking as Virat completed his 27th Test hundred and 20th as captain? Whatever lessons were learnt, it certainly didn’t show when they were batting for the second time in the match.

Virat’s innings was based on some basic fundamentals of batting: sound judgement of the off-stump, playing the ball late to counter the extra movement of the pink ball and watchfulness in defence.

Most of his signature strokes were eye-catching — the cover drive, the whip off his legs and the jab square of the wicket. For variation, there was also the pull once it was pitched short.

There were four consecutive boundaries in one Abu Jayed over — 18 in all — once Virat completed back-to-back centuries at the Eden. The previous one had come against Sri Lanka in November 2017.

The India innings though failed to find the desired momentum once Virat departed after the second new ball was taken, courtesy a blinder taken at deep fine leg by Taijul Islam.

It was perhaps Virat’s only aerial shot during his 288-minute vigil at the wicket and Taijul plucked it out of thin air diving to his right.

That though proved to be some consolation for an otherwise demoralised performance.