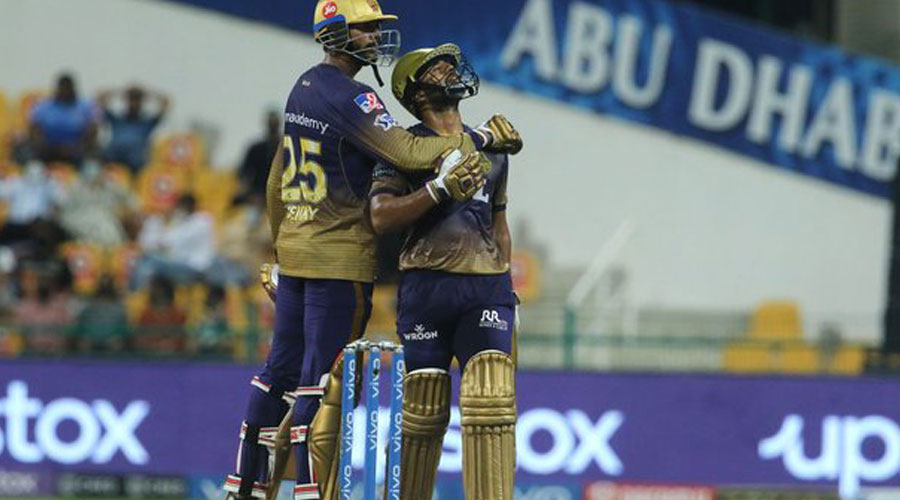 The fearless brand of cricket that head coach Brendon McCullum and captain Eoin Morgan had been searching for long was exhibited to perfection by opener Venkatesh Iyer (53 off 30 balls) and No. 3 batter Rahul Tripathi (74 not out off 42 balls) as the Kolkata Knight Riders hammered Mumbai Indians by seven wickets at the Zayed Cricket Stadium in Abu Dhabi on Thursday.

After Morgan won the toss, his bowlers did more than a decent job by restricting Mumbai to 155/6, a total that was below par as the Abu Dhabi track tends to get easier for batting in the second half. Then fireworks from Venkatesh and Tripathi’s bats saw the Knight Riders chase down the target with 29 balls to spare, recording their second successive victory.

With their first win over nemesis Mumbai after two years and five months, the Knight Riders moved up to fourth in the table with eight points as their healthy net run rate (+0.363) kept them ahead of reigning champions Mumbai and Rajasthan Royals, both of whom are on eight points. 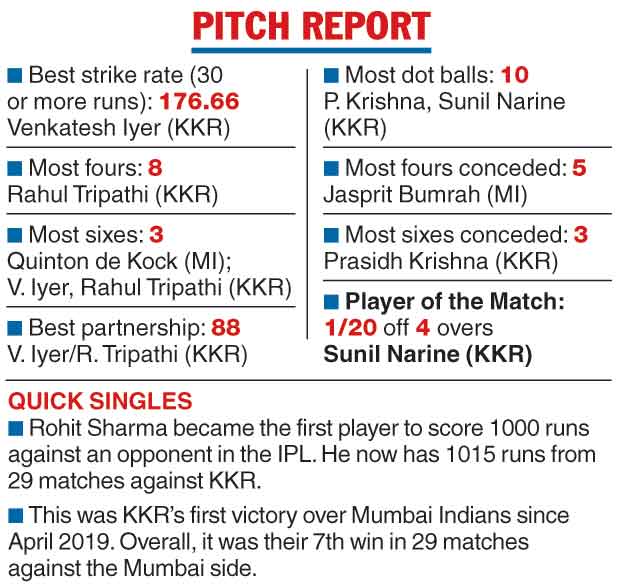 Mumbai, suffering back-to-back losses in this second phase of IPL 2021, have slipped to sixth now. Even captain Rohit Sharma’s return to the XI didn’t help their cause.

Turning out to be the ideal opener the Knight Riders were in search of to partner Shubman Gill at the top, the 26-year-old Venkatesh proved that his strokeplay against Royal Challengers Bangalore was no fluke. Facing a stronger bowling attack, featuring two of the world’s best quicks in Trent Boult and Jasprit Bumrah, the left-handed batter simply backed his instincts.

Tripathi, on the other hand, ensured that the Knight Riders didn’t lose the flow after Venkatesh and Shubman whacked 40 off the first three overs. Such was the impact of Venkatesh and Tripathi’s whirlwind 88-run second-wicket stand that even Bumrah, despite taking all three wickets to fall, finished with an economy rate of 10.75. 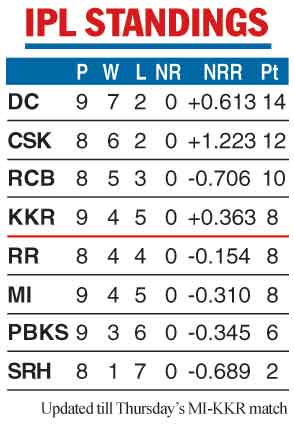 Rohit (33) and Quinton de Kock (55) had taken Mumbai off to a fine start as they reached 56/0 in the Powerplay. But Sunil Narine (1/20) dismissed Rohit by just varying his length a little bit.

Mumbai’s scoring rate started dipping from that point and Prasidh Krishna, thereafter, picked up the key scalps of Suryakumar Yadav and a well-set De Kock to further dent Mumbai’s progress.