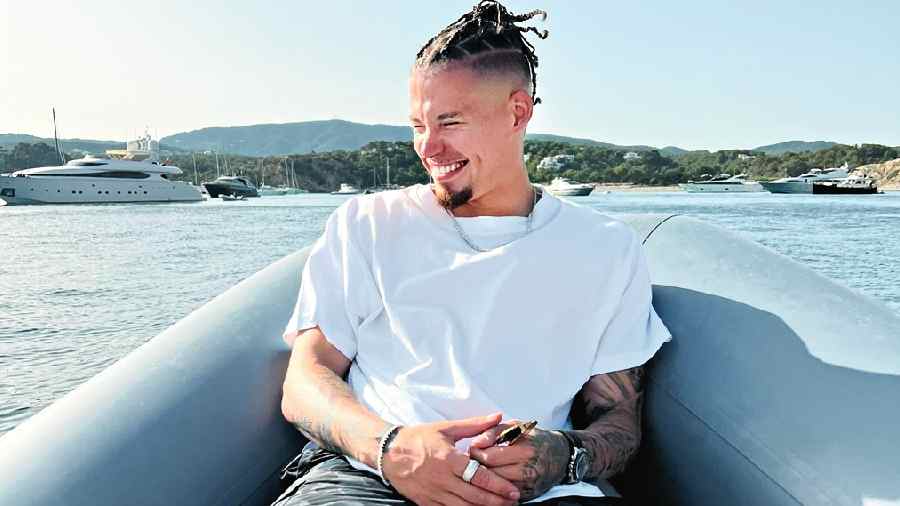 Kalvin Phillips of Leeds United basks in the Ibiza sunshine during his off-season vacation.
Instagram
Our Bureau   |   Manchester   |   Published 26.06.22, 12:40 AM

Manchester City have agreed a deal with Leeds to sign midfielder Kalvin Phillips for a fee in the region of £45m to £50m.

England international Phillips is moving closer to leaving his boyhood club, where he came through the academy and flourished under former boss Marcelo Bielsa.

The deal has yet to be officially completed as Phillips still needs to agree personal terms and pass a medical.

Out of loyalty to Leeds, the only club Phillips would have joined was Manchester City and he has turned down approaches from other clubs.

The 26-year-old will look to fill the void left by Fernandinho at City, who revealed he will be leaving the club this summer after nine years with the club.

At Leeds, the England midfielder may just have the keys to the city. A boyhood fan of the Whites, with his entire family 100 per cent Leeds as well, there’s little to no doubt that Phillips would be content staying at Elland Road for the rest of his career.

But Manchester City, who have agreed a deal with Leeds to sign the 26-year-old, can promise trophies, Champions League football and a real step up in his career. The midfielder could easily follow Jack Grealish — who quit his home in Aston Villa last season — in becoming a top-flight winner within a year.”

Arsenal have reached an agreement in principle with Manchester City to sign Gabriel Jesus.

There is still work to do to finalise the deal, including medical and personal terms but the fee is understood to be £45m.

Arsenal are also expected to go back in with an improved bid for Leeds forward Raphinha.

The north London club put in nearly six months of work with Jesus’ representative Marcello Pettinati to ensure they were in pole position to recruit him from the Premier League champions this summer.

Jesus indicated his desire to move to the Emirates at the start of June and the only hindrance so far has been the distance between the valuations of both clubs.

Jesus wants to reunite with Mikel Arteta, who would regularly offer individual coaching and advice when serving as assistant to Pep Guardiola.

Arsenal’s strength of pursuit, the fact they are desperately in need of an attacker in his mould, and the opportunity for Jesus to assume more responsibility appeals.

Arteta is without a senior striker after the expiry of Alexandre Lacazette’s contract and Pierre-Emerick Aubameyang’s exit to Barcelona.

Bournemouth have signed midfielder Joe Rothwell from Blackburn Rovers on a four-year deal on a free transfer, the newly-promoted Premier League club announced.

Rothwell, 27, scored three goals and recorded 10 assists in 41 appearances in the Championship (second tier) for Blackburn as they narrowly missed out on the playoffs with an eighth-placed finish.

Bournemouth secured automatic promotion to the Premier League with a second-placed finish in the Championship.

Nottingham Forest have signed Nigeria forward Taiwo Awoniyi from Bundesliga side Union Berlin on a five-year contract, the newly-promoted club said. British media reported that Forest had paid Union a club-record fee of £17 million for the 24-year-old international.

He becomes Forest’s first signing since they beat Huddersfield Town in the Championship playoff final last month to seal their return to the Premier League.

“It’s always been my dream to play in the Premier League and having spoken to (Forest manager) Steve Cooper about our ambitions and looking at Forest, with its great history, it’s a club that I want to be part of,” Awoniyi said.

He was a key figure for Union last season, scoring 20 goals in 43 appearances in all competitions as they finished fifth in Bundesliga and secured a spot in the Europa League.