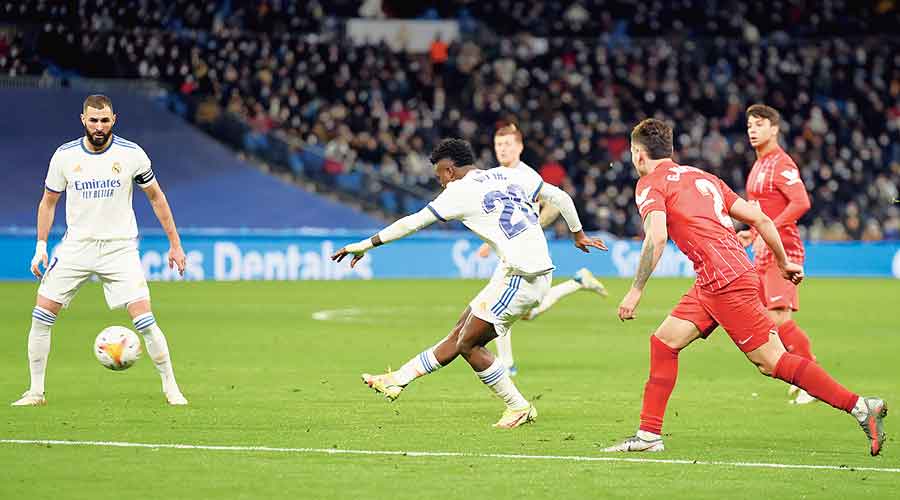 Vinicius Junior’s stunning effort rescued Real Madrid as they fought back to beat Sevilla 2-1 in an electrifying match in the Spanish capital on Sunday to stay top of La Liga and frustrate the visitors’ hopes of leapfrogging them at the summit.

Vinicius netted the winner with a superb cross shot from outside the box in the 87th minute, completing Real’s comeback after they fell behind early.

Sevilla went in front in the 12th minute with a header from Rafa Mir and Julen Lopetegui’s team almost extended their lead twice but a mistake by goalkeeper Bono allowed Karim Benzema to equalise before half-time.

The goal gave Real renewed energy, and they came back much stronger after the break.

Sevilla did their best to keep Real at bay with a sterling defensive effort in the second half, but the in-form Vinicius scored his ninth goal in Spanish League this season to snatch all three points.

Carlo Ancelotti’s team moved to 33 points from 14 games. “Great players like Vinicius are like that. If you give them one opportunity, they will punish you,” Real midfielder Casemiro told reporters.

“Vinicius knows that teams will plan to neutralise him because they are aware of his quality, of the momentum he has. He is a top player and he showed why.”

In his fourth season since arriving in Madrid from Brazil as a teenager, Vinicius has been arguably the best player in the league this campaign.

A frenzied Santiago Bernabeu crowd gave him a standing ovation when he was substituted five minutes later, as the forward left the pitch sporting a big smile.

Atletico Madrid turned around a poor first-half performance to score four goals after the break and earn a 4-1 win at Cadiz that put them second in the standings. Thomas Lemar, Antoine Griezmann, Angel Correa and Matheus Cunha were all on target as Atletico won when scoring four or more for the first time in all competitions this season.

Cadiz scored their only goal to make it 3-1 late in the second half, following a shocking mistake from goalkeeper Jan Oblak. They are still winless at home this season.

Atletico have 29 points from 14 games. Atletico are level on points with former leaders Real Sociedad, who lost their first league game in more then three months on Sunday against Espanyol.