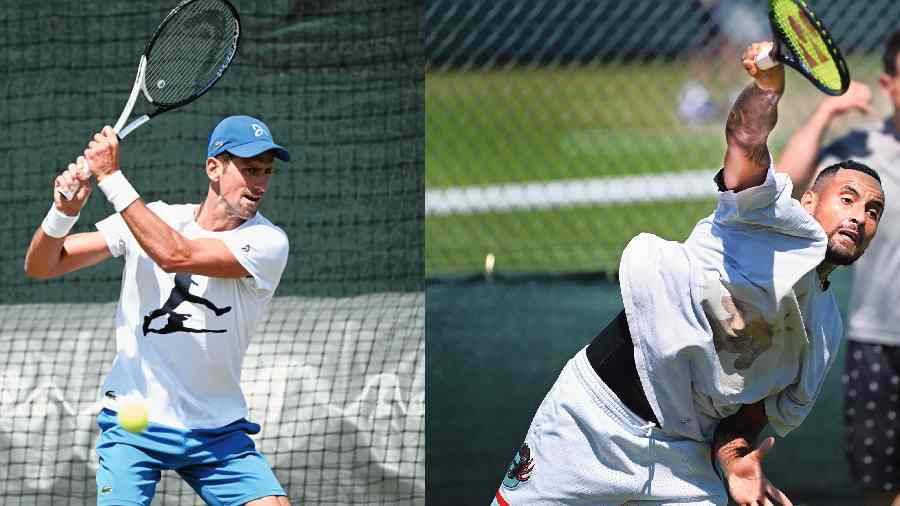 Novak Djokovic has contested 31 grand slam finals, yet he might not be prepared for what is in store for Sunday’s Wimbledon men’s singles summit showdown. That’s because standing on the other side of the court will be Australian showman Nick Kyrgios, who conjures up surprises for almost all his opponents, big or small.

So while the 35-year-old Serbian will start as the favourite, few will dare to rule out Kyrgios, who will be contesting his first grand slam final. It could be an underarm serve played between the legs on the first point of the match, a tweener drop shot from the baseline on a break point or picking a fight with a fan. Kyrgios’s bag of tricks is always full.

Djokovic no doubt will be a tough nut to crack as he tries to lift the Wimbledon crown for the fourth successive time and add to his collection of 20 grand slam titles. But he will know that amidst all the theatre and bravado, Kyrgios possesses a lethal range of grasscourt weapons that threaten to end his 27-match unbeaten run at Wimbledon and wrench the title from his grasp.

And if one throws in an interesting bit of record from the past — in their only two previous meetings, both in 2017, Djokovic did not win a set, did not break the Kyrgios serve and had only one break point — Sunday’s contest looks even more intriguing.

“I guess it’s going to be a game of small margins,” said Djokovic, who is bidding for a seventh Wimbledon crown. “His motion for the serve is so fluid and just very quick. He can hit any angle really. He tosses it forward so he can come in, serve and volley. He puts himself in a great position to be aggressive or to stay back.

“It's tough to read. I haven’t practised with him or played with him since the last time I lost to him.”

There is also a possibility of Kyrgios losing the plot because he has never been in a similar situation before. “I never thought I’d be here. I’m just super proud and I’m just ready to go. I’m going to give it my all and we’ll see what happens,” the Australia world No. 40 said.

Kyrgios once labelled Djokovic a “tool”, said he had a “sick obsession” with wanting to be liked and described Djokovic’s trademark post-match celebration as “cringe-worthy”. But the same Kyrgios supported the Serb when he was deported from the Australian Open for not having a Covid-19 vaccination earlier this year.

At times, it seems a weird match-up for a grand slam final. But it also has the potential to be one of the most memorable ones.