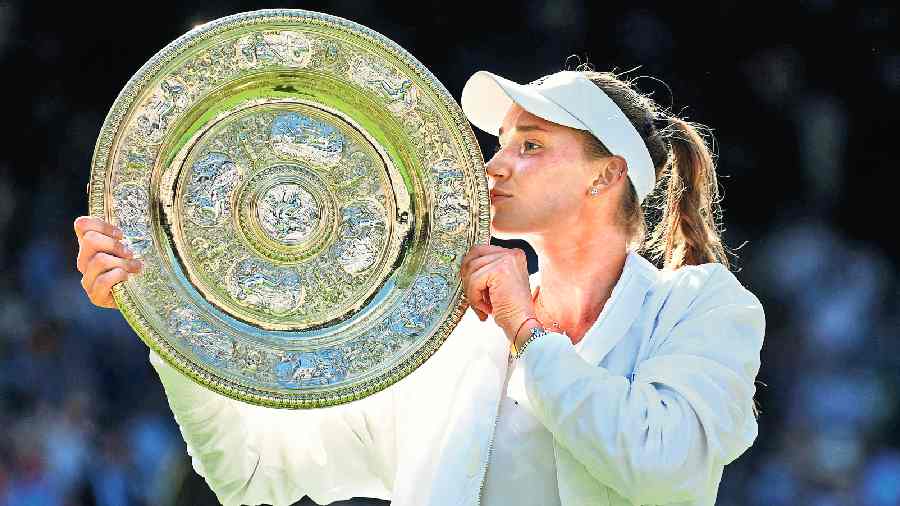 Moscow-born Elena Rybakina rallied from a set down to defeat Tunisia’s world No.2 Ons Jabeur 3-6, 6-2, 6-2 in an entertaining final on Saturday to become the first player from Kazakhstan to win a grand slam singles title at Wimbledon.

With Russian and Belarussian players banned from the grasscourt major following Moscow’s invasion of Ukraine, Rybakina would have been excluded from this year’s Wimbledon had she not switched allegiance from Russia four years ago.

But even if the repeated questions on her links to Russia during the past fortnight impacted Rybakina mentally, it did not have any discernable impact on the 23-year-old’s game.

In a final featuring two first-time grand slam finalists for the first time since 1962, it was the lanky Rybakina who lifted the Venus Rosewater Dish after another power-packed performance to become the fifth different women’s champion in as many editions at the All England Club.

“It’s special because I was super nervous before the match (and) during the match and I’m honestly happy that it is over. I’ve never felt something like this,” Rybakina said on court after being presented with the trophy by the Duchess of Cambridge.

“I just want to say a big thanks to the crowd for the support, it was unbelievable.”

Rybakina’s booming delivery was supposed to be a key factor in Saturday’s contest but it was Jabeur who had less trouble in holding on to her serve in the opening stages on a sun-bathed Centre Court.

Jabeur’s ploy to mix things up clearly upset Rybakina’s rhythm as the Tunisian landed the first blow with a break in the third game.

Rybakina appeared to lose the plot while trailing 5-3 as she committed four unforced errors — including a double fault — to hand Jabeur a second break and with it the opening set in just 32 minutes.

But the match was far from over.

The momentum shifted in the Kazakh player’s favour as she nosed ahead in the second set with an early break.

Elena Rybakina celebrates with her team in the players’ box after winning the Wimbledon.

The red-framed racket of Rybakina was suddenly spitting fire while she demonstrated the agility to run down Jabeur’s drop shots despite her tall frame.

The Tunisian had three chances to level things up during a lengthy fourth game but Rybakina held firm and then broke Jabeur in the next game to take a 4-1 lead.

Three games later the 17th seed slammed down an 116mph ace to send the contest into a deciding set.

Rybakina took the lead by breaking Jabeur in the opening game of the final set.

Known back home as ‘Minister of Happiness’, Jabeur by then cut a frustrated figure on the lush green lawns despite enjoying the raucous backing of the Centre Court crowd. Jabeur got them more excited in anticipation when she set up three breakpoint chances in the sixth game but once again Rybakina shut her out.

Rybakina appeared a bit nervous while serving for the match but then sealed the title on her first championship point as Jabeur sent a backhand wide.

The cool-as-cucumber Kazakh celebrated the victory with barely a fist-pump and just a fleeting smile.

Rybakina was generous in her praise of Jabeur, who was trying to become the first African woman and first Arab to win a grand slam title.

“I want to congratulate Ons for the great match and everything you have achieved. It’s amazing and I think you are an inspiration not only to young juniors but everybody.”

Jabeur, 27, looked deflated as she walked off court with her runners-up plate.

“I want to congratulate Elena and her team, she played amazing. I love this tournament so much and I feel really sad, but I mean it’s tennis and there is only one winner,” she said.

“I’m really happy that I’m trying to inspire many generations from my country. I hope they’re listening.”