The Ashes: Bowlers give England the edge

Australia hold an unassailable 3-0 lead in the five-match series after big wins in Brisbane, Adelaide and Melbourne 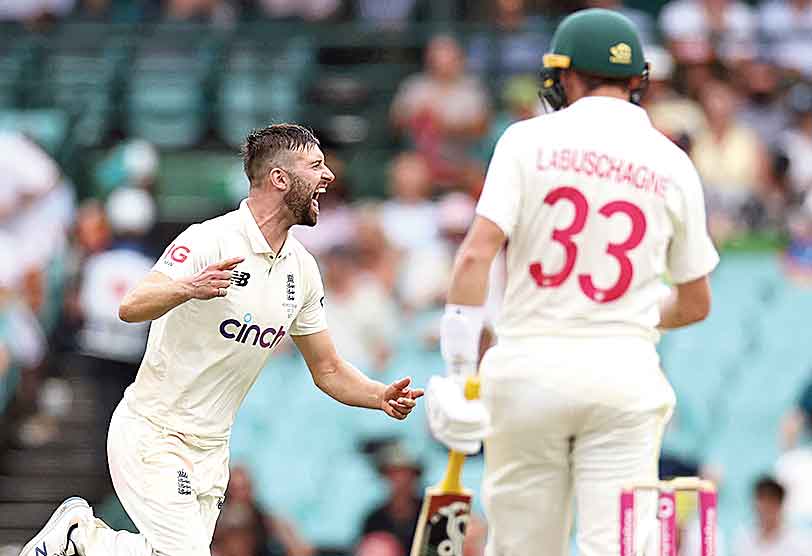 England’s Mark Wood (left) celebrates after dismissing Marnus Labuschagne of Australia on Day I of the fourth Ashes Test at the SCG.
Getty Images
Reuters   |   Sydney   |   Published 06.01.22, 02:20 AM

England’s bowlers struck twice in the final session to reduce Australia to 126 for three at the close of play on a rain-disrupted opening day of the fourth Ashes Test at the Sydney Cricket Ground on Wednesday.

James Anderson finally dismissed Marcus Harris for a 109-ball 38 and Mark Wood had Marnus Labuschagne caught behind for 28 in the following over to give the tourists a small spring in their step heading into Day II.

Stuart Broad had earlier reprised his role as David Warner’s nemesis by dismissing the Australia opener for the 13th time in Ashes Tests just before the longest rain-interruption took a two-hour chunk out of the middle of the day.

With Australia holding an unassailable 3-0 lead in the five-match series after big wins in Brisbane, Adelaide and Melbourne, the tourists are desperate for a good showing in Sydney to restore some pride.

Australia have plenty of batting in hand, however, and Steve Smith was six not out alongside Usman Khawaja, unbeaten on four, when another shower brought an early end to the day’s play.

“Tomorrow (Thursday) is a huge part of the game, if we can start like we finished tonight, we can put Australia under pressure and try and get their big players out,” said Wood.

“Because we’ve managed to get a couple of (wickets) at the end of the day, it’s changed the whole perception of the day. If we get can try to get on them tomorrow, it changes the game again.”

Khawaja, replacing Travis Head after the middle order batsman tested positive for Covid-19, was the only change to the side that Australia skipper Pat Cummins sent in to bat after winning the delayed toss.

There were dark clouds over Sydney’s eastern suburbs when the openers came out and the rain swept in from the Pacific Ocean at regular intervals thereafter with only 46 overs completed.

Broad made the first breakthrough after lunch when a fuller length ball moved away from Warner, caught the edge of the bat and landed comfortably in the grasp of Zak Crawley at second slip.

“Me and Broady love it when we’re out there, it’s good fun, good funny banter,” said Warner, who hit six fours in his 30. “Today, I tried to drive the ball too straight ... that was my disappointment but it’s awesome to see Broady back out there, to have Jimmy and him bowling at us is great.”

England struggled to make headway otherwise until deep into the extended final session when Anderson drew Harris into playing at a ball that moved away and skipper Joe Root snaffled up the edge in the cordon.

Travis Head is set to rejoin the squad on Friday after completing a seven-day spell in isolation, Cricket Australia (CA) said. “Australia batter Travis Head will rejoin the men’s squad for the Ashes series on Friday provided he returns negative rapid antigen tests from today,” CA said in a statement on Wednesday.

“Heads’ isolation period ends tomorrow (Thursday). He tested negative this morning and will be subject to another test tomorrow morning. If negative, as anticipated, he will fly to Sydney.

“He will then have one final test on Friday which, if negative as is anticipated, will allow him to rejoin the group,” the statement added.