Edgbaston: Rishabh Pant pulls India out of the woods 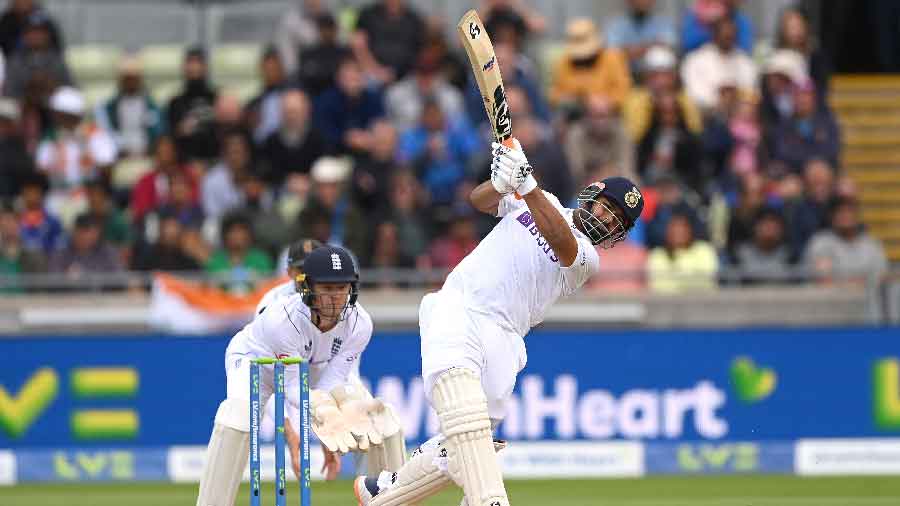 India’s Rishabh Pant on Day I of the rescheduled fifth Test against England at Edgbaston on Friday.
BCCI/Twitter
Sayak Banerjee   |   Calcutta   |   Published 02.07.22, 03:38 AM

The overhead conditions aside, the Birmingham pitch didn’t seem to be having any demons in it.

But, on a wicket where the bounce was on the lower side, India’s top order crumbled yet again after England won the toss and opted to bowl. However, thanks to Rishabh Pant (146 off just 111 balls) and Ravindra Jadeja (83 batting), India not just fought back, but find themselves well placed at 338 for 7 at stumps on Day I of the rescheduled fifth Test at Edgbaston.

As has been the case often since the tour of Australia in 2020-21, it’s the lower-middle order that came to India’s rescue once again with their counterpunch putting the pressure right back on the opposition camp. Pant, while establishing himself as India’s crisis man in Test cricket, and Jadeja simply showed how good the wicket is for batting if one just remained patient and avoided unforced errors.

Being a tad watchful after India were wobbling at 98 for 5 after lunch on Friday, the duo turned the scales brilliantly, scoring at almost six an over in their 222-run stand, which could well be massive in determining the outcome of this game.

Pant, sent in at No.5 ahead of Shreyas Iyer, went about in his typical fashion, taking no half-measures whenever the ball was in his arc as he unleashed some exquisite drives, cuts and pulls. Jadeja’s assuredness at the other end further complemented Pant, who simply toyed with the indisciplined English attack in Friday’s final session before perishing off part-timer Joe Root’s bowling.

The wicketkeeper-batsman’s shot-making was at times outrageous — he again reverse-scooped James Anderson after tea like he had done in Ahmedabad last year. But what stood out was Pant’s temperament.

As for England, they lost the plot with too many boundary balls, especially by Matthew Potts, who had earlier done a fine job by trapping No.3 batsman Hanuma Vihari lbw before taking the prized scalp of Virat Kohli. England captain Ben Stokes alone bowled 10 no-balls.

Barring those moments when Pant went after him, Anderson again was by far the best of all English bowlers. The Dukes ball going softer and out of shape quickly also made matters tougher for him and the rest of the England bowling group, but prior to that, Anderson was at his best.

India’s makeshift opening pair of Shubman Gill and Cheteshwar Pujara began steadily. But with Anderson persisting with the outside off-stump line, the openers perished.

Then, Anderson needed just two short balls to unsettle Shreyas. And the third one was good enough to get him out.