Advertisement
Home / Sports / Cricket / Rewind: How 2021 panned out for cricket

Rewind: How 2021 panned out for cricket

In 2022, the calendar comprises events such as the T20 World Cup and India’s tour of England 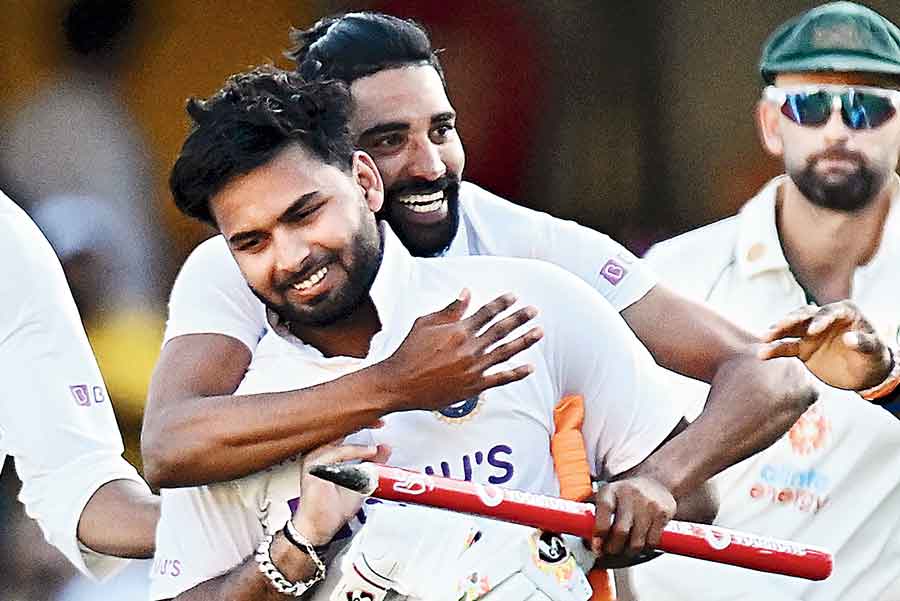 Cricket had its usual swings and edges in a year that was once again hampered by the pandemic. But despite the players growing tired of bio-bubbles, the show went on. The Telegraph sums up cricket’s year

With a bulk of the regulars getting injured and unavailable, India had to make do with almost all their reserves in the deciding fourth and final Test against a full-strength Australian side at the Gabba in Brisbane in January. It was the 123-run seventh-wicket first innings stand between Shardul Thakur, who was playing just his second Test, and debutant Washington Sundar that laid the platform for India’s fightback. On the final day, chasing a 328-run target, India, resuming on 4/0, launched an audacious attack led by Rishabh Pant. His 89 not out — a breathtaking, counter-attacking knock — took India home and also completed a rare-back-to-back Test series triumph Down Under.

Conditions at the Rose Bowl in Southampton were more to New Zealand’s liking, but India did have their pace wherewithal to hit the Black Caps hard in the inaugural WTC final. But India’s batting let them down in both innings. In the end, India could set Kane Williamson’s team just a 139-run target. The Black Caps won easily, by eight wickets, to prolong Virat Kohli’s wait for an ICC trophy.

Covid-19 broke IPL into two halves. Once, the virus broke through the bio-bubble in May, the IPL, which was being held in India, had to be held up. But with the BCCI determined to finish it somehow and the situation in India not being ideal to host the remaining matches of the cash-rich tournament, the IPL caravan travelled to the UAE. The second phase resumed in mid-September and was completed without any trouble with Mahendra Singh Dhoni’s Chennai Super Kings being crowned the champions. This was the first time the IPL, since its inception in 2008, was held in two phases.

Virat Kohli decided to relinquish the T20I captaincy to focus more as an ODI and Test skipper. He also said this IPL 2021 was the last time he would captain the Royal Challengers Bangalore. But Kohli was stumped when the BCCI removed him from the ODI captaincy as well with Rohit Sharma taking over as the new white-ball skipper. The entire issue became all the more contentious when Kohli claimed he wasn’t requested to reconsider giving up the T20I captaincy, which completely contradicted what BCCI president Sourav Ganguly had said just a few days earlier. The BCCI has officially maintained silence on the matter, though insiders say a storm is brewing.

It was a strange year for Ravichandran Ashwin. On one hand he became the second fastest bowler to take 400 Test wickets (77 matches), on the other he did not get to play a single Test during India’s tour of England. Ashwin reached the 400-wicket landmark when he dismissed Jofra Archer in the second innings of the pink-ball Test in Ahmedabad in March. Down the year, he also went past Harbhajan Singh to become India’s third-highest wicket-taker in Tests.

THE WORLD AT A GLANCE

They may look ordinary and get thrashed in a bilateral series, especially when playing overseas. But in ICC events and world meets, New Zealand continued to prove that they certainly are a different team. Playing as a unit is their strength, which was integral in securing them the inaugural World Test Championship crown although India, their opponents in the final, were a more complete side with all their bases covered. They also reached the T20 World Cup final in the UAE, before losing to Australia.

Following the Taliban’s return to power in Afghanistan, their cricket finds itself in a volatile situation. Their participation in the T20 World Cup wasn’t affected and the Afghans did have their moments in the competition. But the approach of the Taliban, particularly their reluctance to let Afghan women play the sport, has made the scenario very dicey for Afghanistan at the global stage. Afghanistan’s historic first-ever Test versus Australia, which was scheduled to be played in Hobart in November, was indefinitely postponed by Cricket Australia due to the Taliban’s policies on women’s participation in sports. What next?

Perhaps, even their biggest supporters did not dream that Pakistan would turn out to be one of the most dominating teams in the T20 World Cup. They won every game in the group phase to reach the semi-finals. Babar Azam’s team registered a first versus India, when they thrashed the Virat Kohli-led star-studded line-up by 10 wickets to record Pakistan’s maiden win versus their arch-rivals in a World Cup match. It was left-arm quick Shaheen Afridi’s dream spell early on (when he dismissed openers Rohit Sharma and KL Rahul) that set the tone for Pakistan’s magnificent run. They lost the semi-final versus Australia but impressed all with their game. Pakistan didn’t come across formidable opponents thereafter, facing Bangladesh away and the West Indies at home.

But they won all those matches against both opponents convincingly, which underlined the fact that this Pakistan team, unlike the ones in the past, is disciplined and consistent.

Less than three weeks before the Ashes got underway from December 8, Tim Paine quit as Australia Test captain after the emergence of an investigation four years ago by Cricket Australia for sending lewd text messages to a Cricket Tasmania female staffer. Viewed as the man who led a more empathetic and humble Australian team since taking over the Test captaincy reins following the 2018 ball-tampering scandal in Cape Town, Paine took the decision on coming to know that the private text exchanges were going to become public very soon. A few days later, he announced he would be taking an indefinite mental-health break.

DISAPPOINTMENT OF THE YEAR

From being considered the favourites to win the tournament to falling face first, right from the first game, nothing went right for India in the T20 World Cup. Virat Kohli, who was leading the T20I team for the last time, had a nightmarish experience as India looked completely listless and jaded in their performances. The tournament, which was played in the UAE with BCCI as the hosts, was preceded by the IPL. While the thinking was that it would help the Indian players to prepare for the ICC meet, the ploy backfired. Poor decision-making also cost India dear. The team management were rigid in backing all-rounder Hardik Pandya, who was badly out of form. Questions were also raised about the team selection as India failed to reach even the semi-finals of a tournament which many thought they should have won.