IPL 2022: Shami begins with fire, Rahul Tewatia finishes it off

The spotlight was also on Titans skipper Hardik Pandya, who played his first competitive game in over four months after regaining fitness 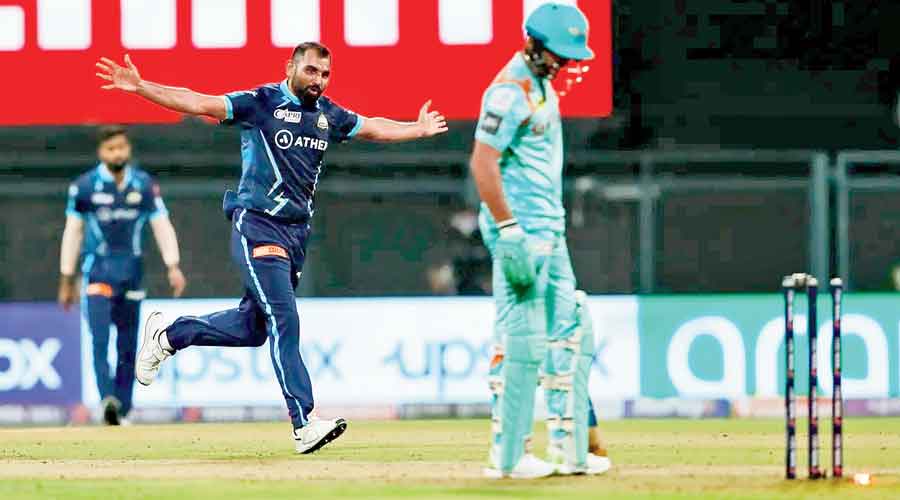 Shami celebrates after taking the wicket of Manish Pandey, one of his three scalps in Gujarat Titans’ match against Lucknow Super Giants.
IPL
Sayak Banerjee   |   Published 29.03.22, 02:11 AM

Rahul Tewatia proved his ability as a finisher once again. The all-rounder, with able assistance from David Miller (30) and Abhinav Manohar (15 not out), hit an unbeaten 40 off just 24 balls as Gujarat Titans prevailed over Lucknow Super Giants by five wickets in the clash of the debutants at the Wankhede in Mumbai on Monday.

Opting to bowl first, the Titans were all over Lucknow, courtesy Mohammed Shami’s initial burst. The senior India quick made superb use of the seam to account for rival captain KL Rahul, Quinton de Kock and Manish Pandey that had Lucknow tottering at 29 for 4 in the fifth over.

The Titans’ reply, however, never really got going and with five overs left, they needed as many as 68 to win.

Following his fine innings, Hooda had begun well with the ball too, picking up the important wicket of Titans opener Matthew Wade. But he was taken to the cleaners by Tewatia and Miller, conceding 22 in the game-changing 16th over that gave the Titans some much-needed momentum.

Promising leg-spinner Ravi Bishnoi too felt the pressure as Tewatia and Miller took 17 off him in the next over. Twenty-nine from the last three overs was very much gettable for the Titans.

They did lose Miller then against the run of play as Lucknow tried to claw their way back into the game. But Abhinav too showed his capability with meaty blows that took the pressure off Tewatia, who played some scorching strokes, including a reverse sweep off Bishnoi that went for a six.

It wasn’t the first time that Tewatia has played such a knock though. He had done so in the previous editions too while playing for Rajasthan Royals.

The spotlight was also on Titans skipper Hardik Pandya, who played his first competitive game in over four months after regaining fitness. Bowling for the first time since November 3 last year, during India’s T20 World Cup game versus Afghanistan, Hardik was mediocre to say the least with the ball, going wicketless and conceding 37 off his four overs.

Thereafter, with the bat, he did look solid at No.4 but couldn’t last too long as his elder brother Krunal Pandya had the better of him.

Off the very first ball of the game, Shami struck with subtle movement that took the edge off Rahul’s bat. And then, he brought the ball just a shade back in to clean up both De Kock and Pandey. It was mainly due to the dew that Shami’s final economy rate went over six.