History in the making

With Eden Gardens hosting the first ever day-night Test match in India, a fan sitting miles away can’t wait for the historic encounter to unfold 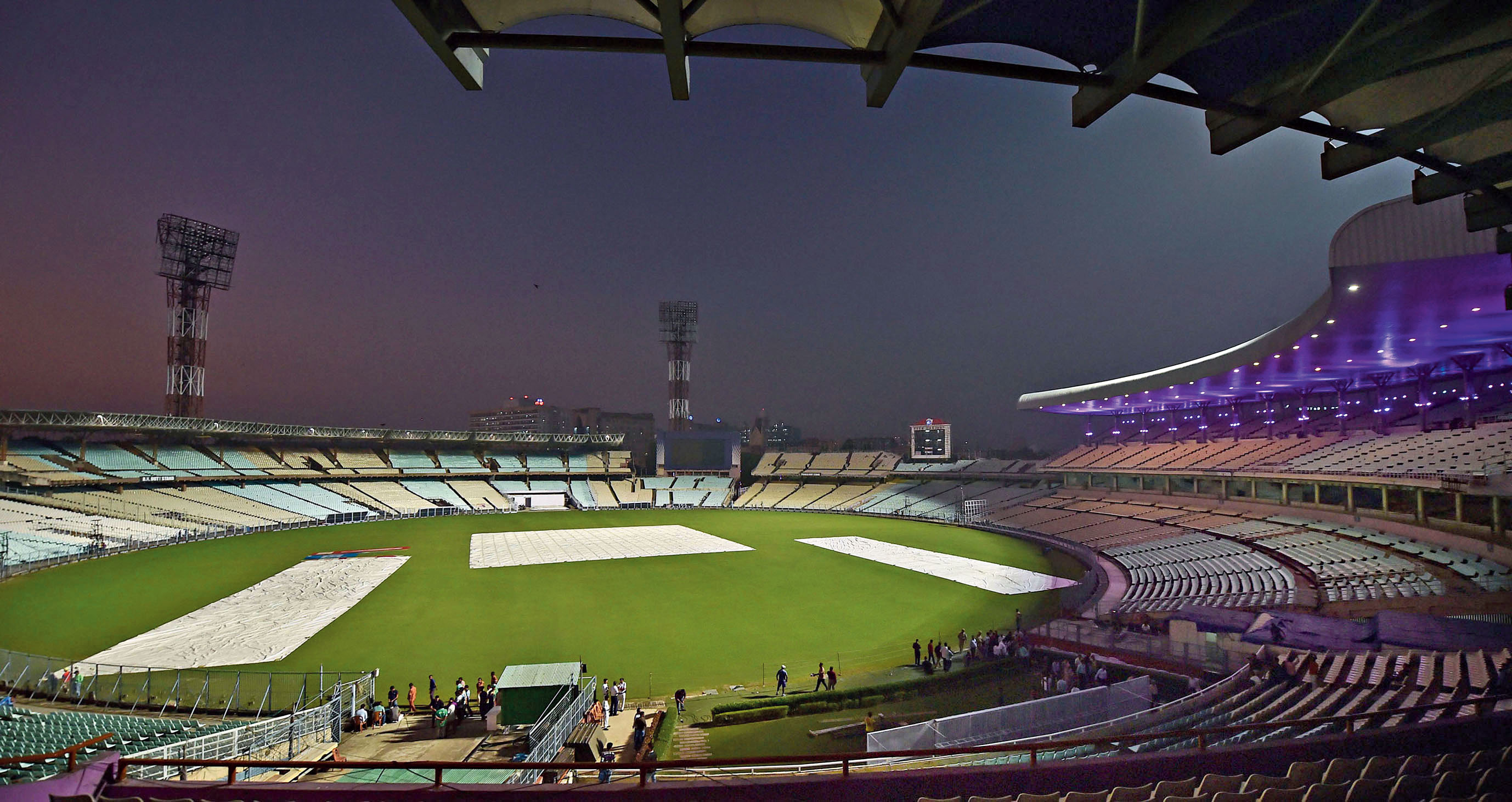 I felt I had entered a film studio. The image before my eyes was pristine — a composite of gleaming set pieces, with each component resting seamlessly in its designated place. The hazy late autumn sky settled serenely on the synchronised stands that stood punctuated with dollops of colours, a perfect complement to the immaculate exhibition of white on the pitch. A red cherry fluttered here and there — bouncing, swinging and gliding along the enormous carpeted floor of green. Sometimes the cherry would whizz past the edge of chiselled wood, provoking a collective sigh; at others it was met by the same wood with a thumping sound that drowned in the subsequent bursts of applause. With the resonance of “India, India” and the smell of fresh grass permeating the air, I sat mesmerised. This was Eden, and this was paradisiacal — an enchanting experience for a first-time spectator, like myself, at an iconic venue where cricketing heritage nestles in every corner.

Ahead of the landmark tie, BCCI boss Sourav Ganguly on his mark, at Eden Gardens on Wednesday.
Picture: Santosh Ghosh

Twelve years after I had attended my first Test match at the Eden Gardens as a nine-year-old boy — (when India played Pakistan in November 2007 — one of the most celebrated stadiums in world cricket is about to observe something different — the heralding of a new phenomenon. Starting today, India and Bangladesh will square off in the first day-night Test match in India at the Eden, kick-starting a trend that could revolutionise the original format of the game.

I was brimming with excitement when the confirmation of Calcutta playing host arrived. Yet, before I could process the news, I was hit with the realisation that I was no longer in touching distance of the Gardens. Some 5,000 miles away in Brighton, United Kingdom (for my higher studies), I would not be able to watch the match in person. My dismay, however, was short-lived. The occasion in itself would be unique enough to make television viewing a fascinating experience.

With the legacy of the past mingling with the innovations of the present, the India-Bangladesh Test match at the Eden Gardens is destined to be a promise to posterity, an occasion that could catalyse the transformation of Tests from rarefied relic to wholesome entertainment, all through tinkering with time. With this magnitude in mind, here are the reasons why the twelfth day-night Test match in history and the first in India, is a must-not miss, be it from the stands or on the screen.

A SIGHT TO BEHOLD

A cricket match under floodlights is nothing new at the Eden Gardens. Remember the 1993 Hero Cup semi-final when Sachin Tendulkar pulled off a minor miracle with the ball in a last-over finish, or Virat Kohli’s pulsating innings against Pakistan in the 2016 ICC World T20? The Eden has had its fair share of limelight under artificial lights, but for the first time in its history, those playing in the floodlit arena would be decked up in white. For many decades, even conceiving the possibility of Test match cricket following its younger cousins (One Day Internationals and Twenty 20s) into the day-night version seemed preposterous, but now it stands on the verge of reality.

Today, 22 men from India and Bangladesh will take to the Eden turf in all-white attire (emblazoned with their names and numbers, another recent addition to Tests) and continue contesting as the scenery around them transitions from afternoon to dusk to night. With play set to begin at one o’clock in the afternoon and wrap up by eight in the evening (according to Indian Standard Time), the potential for picturesque panoramas at the Eden are worth the entry fee alone, and for someone like me, enough motivation to watch the match from the moment coverage begins at half past seven in the morning in England.

From the preferred colour of clothing for males in bygone eras, pink has been reduced to relative obscurity in the contemporary sartorial sensibilities of gentlemen. At the Eden Test, however, pink will make its first excursions into the international level of the gentlemen’s game in India, where it could cause some mischief, especially at the start of the innings. The pink ball, still in its incipient days in Test cricket, has already garnered an infamous reputation for unpredictable movement in other parts of the world. Of particular threat to batsmen would be navigating the new pink ball under lights, with fielders also to be under greater scrutiny in tracing the flight of the ball in the air. With greater experience in tackling the pink ball (thanks to exposure in domestic cricket and training at the NCA) than their Bangladeshi counterparts, India should adapt swiftly to the conditions, but a pink curveball remains a danger for both sides at any stage of the game, making for compelling viewing for fans.

Ahead of the landmark tie, BCCI boss Sourav Ganguly on his mark, at Eden Gardens on Wednesday.
Picture: Santosh Ghosh

Both the BCCI and the CAB have announced that the Eden Gardens will be filled to the rafters on the first three days of the India-Bangladesh Test. A capacity audience is not a novelty at the Eden, but legions of fans investing every ounce of energy for every session of a Test match — as is expected for this game — is a rarity. The timing of the match means that more fans would flock in, many straight from work on Friday, to immerse themselves in a hitherto unprecedented experience. Mexican waves and mobile flashlights will accentuate the mood at the Gardens, but given Calcutta’s passion for cricket, expect some innovation from the fans as well (hopefully, nothing bizarre) as Eden turns up the volume and roars its way into the history books.

THE THEATRICS AND STAR POWER

With Sourav Ganguly as the new BCCI president and the Cricket Association of Bengal at their improvising best, it would be naive to expect anything other than a spectacle on such a memorable occasion at the Eden. Arrangements have been made for paratroopers to fly into and descend on the Eden grass before handing over the two pink balls used for play to the captains of India and Bangladesh. The Army is also expected to play out the national anthems of both the countries before the commencement of the game. The ringing of the customary Eden bell (which signals the beginning of the day’s play) will be performed on Day One by Sheikh Hasina, the Prime Minister of Bangladesh and Mamata Banerjee, the Chief Minister of West Bengal. The 40-minute lunch break will feature a talk show involving the “Fab Five” of Indian cricket — Sourav Ganguly, Sachin Tendulkar, Anil Kumble, Rahul Dravid and VVS Laxman — as they recall India’s incredible victory at the Eden against the Australians in 2001, among much more. This discussion will also be shown on the giant screen at the ground. During the 20-minute tea interval, former Indian test captains and a galaxy of stars from other sports will be taken out in carts, encircling the ground along the boundary lines. At the conclusion of the first day’s play, a felicitation ceremony will honour the players who played the first ever Test match between India and Bangladesh, before dignitaries, including Sheikh Hasina, address the audience.

It may not be very long before Virat Kohli’s current Test side is compared to the irresistible West Indians under Clive Lloyd or the flawless Aussies under Steve Waugh and Ricky Ponting, at least as far as home form is concerned. The Indians have been on a roll over the last few months and a team in full flight will only intensify the interest of those watching. Fabled for decades for possessing an assortment of unparalleled batting talent, India can now pack the same punch with their bowling arsenal. Combine that with a relentless drive to improve and a Kohli-inspired approach to dominate the opposition in every department of the game, and we have an Indian Test team that has hardly ever been stronger. While Bangladesh getting overwhelmed in the same manner as in the first Test at Indore will not make for the competitive action that the advertisement of day-night Tests warrants, India’s firepower across the length of the team means that spectacular cricket is virtually guaranteed from the hosts’ end, with or without resistance from Bangladesh.

Gone are the days when bilateral Tests would count for little for most Indian viewers unless against resolute sides like Australia or England. In times of the ICC World Test Championship, every match matters, as cricket’s elite battle it out over three years to be crowned the kings of Test cricket. This system not only lends overarching relevance to a single Test but also draws viewers into a long, gripping story that culminates with an ultimate victor in England in 2021. What is even better news for followers of Indian cricket is that Kohli and his men sit atop the World Test Championship standings right now, having accumulated a staggering tally of 300 points already, more than all the other teams combined! A comprehensive triumph under the lights at the Eden would only heighten the enormity of the tie as it would represent a significant step in India’s quest to be the best in Tests.