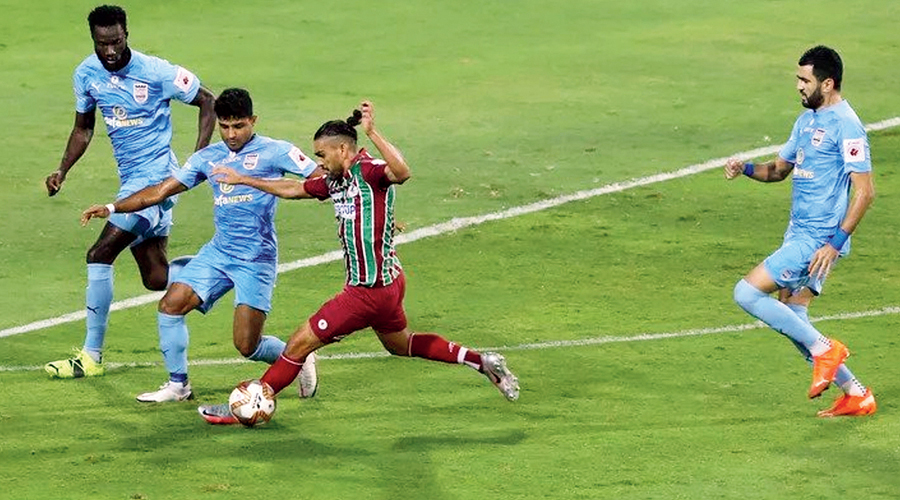 The failure of the 14th edition of the Indian Premier League (IPL) to go the distance because of the coronavirus breaching its bio-secure bubble has raised several questions on what went wrong and again brought to focus the lessons that can be drawn from football.

Sample this. Eighteen bio-bubbles in the coastal state’s 14 hotels and nearly 70,000 RT-PCR tests on 1,635 people helped the smooth functioning of the ISL. And there was no positive case during the league.

“I was tested probably 50 times. It was so stringent that at times I felt irritated. Staying in a bubble for close to six months was no joke. In a footballer’s life, there are ups and downs. And there are certain things you can only share with your family members. Since I was alone, it became mentally draining. Yes, we did share a lot of time with teammates which helped to some extent,” Pritam Kotal, one of ATK Mohun Bagan’s five captains, told The Telegraph on Wednesday.

According an ISL media release, the country’s No. 1 football league spent Rs 17 crore on tests and related costs. The organisers had bought 26,000 N95 masks.

“There were four tiers in the bubble. Tier 1 was for players and match officials, tier 2 was for league officials; in tier 3, club operations officials and other vendors were staying and groundstaff and others were in tier 4. The tiers were insulated from each other,” one ISL official said.

“Another thing one should keep in mind is the testing was done by one vendor. In IPL, there was no centralised testing protocol. In ISL, everything was centralised and that helped too,” another official added.

“In the ISL there was less travelling. It was generally from the team hotel to the venue. Whereas in IPL this time it was being played across several venues. So there was much more travelling involved and players got exposed to the virus,” he added.

Ishfaq Ahmed, the interim head coach of Kerala Blasters, said the bubble was so stringent that it gave him the confidence. “Everything was so well-organised that it boosted our confidence,” Ishfaq said from Srinagar.

Players were allowed to use the swimming pools from late February after the Goa government lifted the restriction on use of pools. But most of the teams avoided that.

“Our club officials did not allow us to use pools. Because at the resort where we were staying, the guests were using the pool,” Kotal said.

FC Goa though did enjoy pool sessions but only after it was sanitised. “One hour before the pool session we used to inform the hotel officials and they used sanitise the entire area. Same used to be the practice before gym sessions too. We followed all the protocols to the T,” an FC Goa official said.

“Forget pools, initially we did not even allow ice baths,” an ISL official added.

The FC Goa official pointed out that the ISL bubble was based on the US National Basketball Association (NBA) model. The NBA had booked hotels in Disneyland and made a bubble to conduct last season’s tournament.

In European leagues, there is no bio-bubble as such. Just that everyone needs to follow the protocols. And clubs reprimand the players or officials if there are any violations.

Bundesliga was the first to show the world sport can be possible even during pandemic. That was in May last year.

The Bundesliga’s Hygiene Concept, which formed the backbone of its successful restart, became the most sought-after guideline for the world of sport. The English Premier League, La Liga, Serie A, the England and Wales Cricket Board (ECB), the IPL XIII in UAE and the ISL VII were all, directly or indirectly, inspired by what Germany did.

Bundesliga did not flinch when it came to transparency. For example, Augsburg coach Heiko Herrlich missed the restart after he broke strict quarantine rules by leaving the team hotel to buy toothpaste. “I acted foolishly,” Herrlich had said.

Somewhere someone during this IPL acted foolishly. One can only hope the BCCI will not flinch from accepting it.