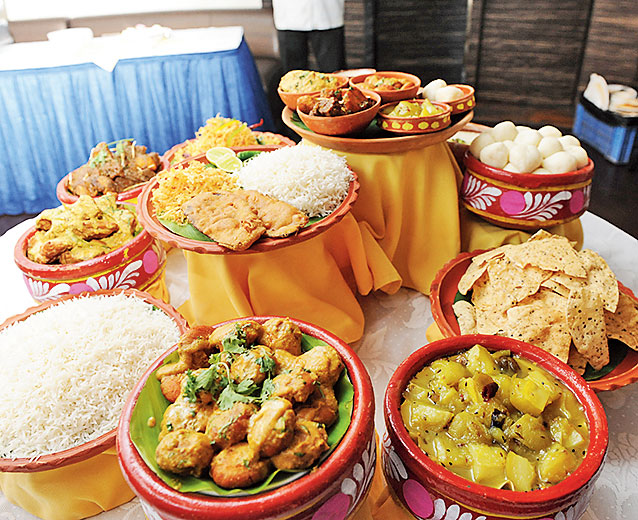 The Bengali kitchen churned out dishes ranging from the simplest mashed potato enlivened with mustard oil, green chillies and onion to a miscellany of vegetables that are fried, boiled, roasted or combined with other veggies and seasoned with spices.
(iStock)
The Telegraph   |   Published 29.07.19, 12:20 PM

Sir — It has become commonplace for the Bengali bhadralok to express a virulent distaste for anything vegetarian. Yet Bengal has a rich tradition of serving a variety of such dishes; items like fish and mutton are just a part of a diverse meal. The Bengali kitchen churned out dishes ranging from the simplest mashed potato enlivened with mustard oil, green chillies and onion to a miscellany of vegetables that are fried, boiled, roasted or combined with other veggies and seasoned with spices. But the anxiety of meat and fish disappearing from plates across the country is causing the Bengali to rebel against vegetables in general.

No one is surprised at the collapse of the coalition government led by H.D. Kumaraswamy in Karnataka
PTI

Sir — No one is surprised at the collapse of the coalition government led by H.D. Kumaraswamy in Karnataka. The ‘Aya Ram, Gaya Ram’ culture in Indian politics that began in the 1970s is now a flourishing business of sorts. One could hope that the Narendra Modi government, which has a huge majority, will bring a more stringent anti-defection law to put an end to this unethical practice. But alas, toppling state governments headed by parties other than the BJP seems to be a priority for the saffron outfit.

One only needs to look at the Madhya Pradesh leader of the Opposition, Gopal Bhargava, for proof. Bharghava shamefully claimed that the Congress government in the state would collapse in 24 hours if the “Number 1 or Number 2” in the Bharatiya Janata Party issue an order to that effect. The way the BJP is proceeding by grabbing power in one state after another, it seems that its dream of ‘one nation, one election’ will soon be fructified. India is undoubtedly headed towards becoming a totalitarian state.

Sir — The editorial, “Steep fall” (July 25), raises a pertinent question regarding the ease with which legislators defect en masse to change the fortunes of political parties without caring for the people’s mandate. This is a breach of fundamental democratic principles. The anti-defection law is not strong enough, making life easier for turncoats. When an elected representative changes his political affiliation, he must be made to seek re-election. This is the only way to ensure that democratic principles are not trifled with.

Sir — The collapse of the coalition government in Karnataka was expected. Congress and Janata Dal (Secular) are traditional rivals who came together not for the betterment of the electorate but to keep the BJP from coming to power. The relationship between the coalition partners was uneasy from day one. As is the case with most political alliances based on compromises, the denial of ministerial berths proved to be the undoing of the Congress-JD(S) combine. It is encouraging that the party in power at the Centre will also be ruling Karnataka. People in the state can now hope to be treated on a par with the citizens of other states.

Sir — The Congress-JD(S) alliance are as much to be blamed for the state of affairs in Karnataka as the BJP. Each political party is only concerned about holding on to power. When does the government have time to focus on welfare measures if it is busy ensuring that its members do not defect? The BJP is not different. In state after state, members conveniently defect to its benefit. In Bengal, the prime minister openly claimed that he was in touch with elected representatives from the Trinamul Congress. Democracy has gone for a toss in the country.

Sir — The Rajasthan High Court has taken a long overdue step by directing lawyers to dispense with the colonial practice of addressing judges as “My Lord” or “Your Lordship” and asked that they simply be called “Sir” (“Dear Sir”, July 25). Similarly, the British left the country over seven decades ago, but lawyers in India still have to wear the long black robes that were customary back in colonial times. It is time such superfluous rituals are done away with. Further, it is expected that the directive of the Rajasthan High Court will be applicable all across the country. There is also ample scope of simplifying the language of the legal documents, which are drafted using unnecessary jargons, complicating matters for lay citizens not trained in law.

Sir — It is heartening to note that the suggestion to address judges as “Sir” instead of “My Lord” or “Your lordship” has come from the judiciary itself. The change in salutation will be a step towards bringing equality between the dispensers of justice and lawyers. One only hopes that this initiative will be the forerunner of other, much-needed judicial reforms .

Sir — Cumbersome robes and needless courtesies only come in the way of dispensing swift justice. The directive of the Rajasthan High Court is, thus, heartening. The apex court should now officially ensure that such gratuitous practices are done away with.