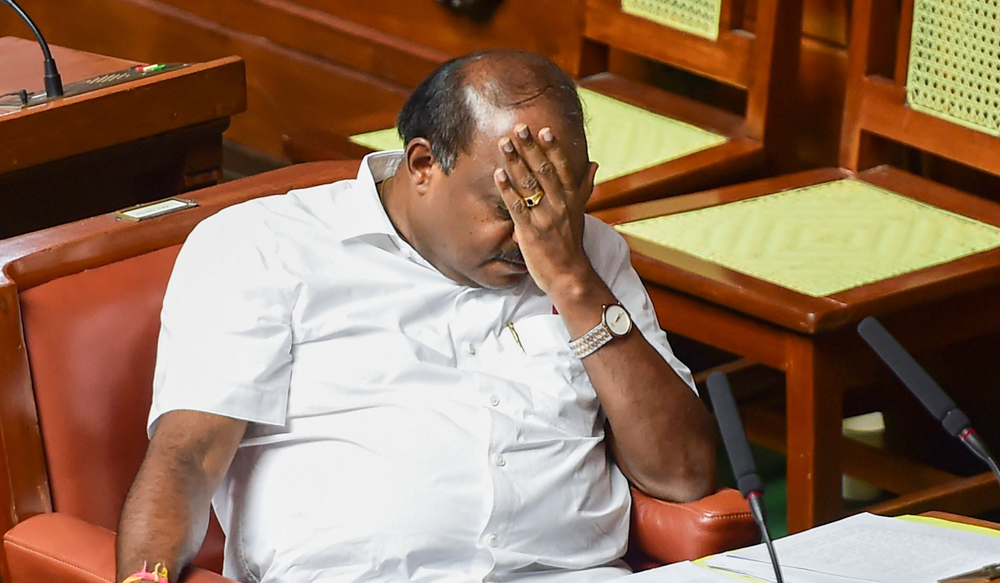 The Congress-JDS government in Karnataka collapsed on Monday after the confidence motion moved by Chief Minister H.D. Kumaraswamy was defeated in the assembly, ending his 14-month long turbulent tenure.

Capping a three-week long high-voltage intense power struggle triggered by a raft of resignations by rebel lawmakers that pushed the government to the brink of collapse, the motion was defeated with 99 members voting for the motion and 105 against it.

”The motion moved by the Chief Minister has fallen through,” Speaker K.R. Ramesh Kumar announced.

Chief Minister H.D. Kumaraswamy watched the proceedings sitting in a pensive mood after a spirited reply to the debate.

With rebellion exploding in its face, the coalition government was hanging by a thread for the last three weeks, with the Supreme Court verdict that rebel law makers ought not to be compelled to attend the session tipping the scales in favour of the BJP.

Outwitted in the numbers game and defeat staring in his face with the rebel MLAs in no mood to step back from their position not to attend the assembly session, Kumaraswamy gave indications of quitting in the initial remarks while winding up the debate on confidence motion.

”I am ready to happily sacrifice this position” he said appearing resigned to the fate of his ministry, as the assembly debated the confidence motion for four days.

Twenty one MLAs-- Congress-JDS (17), BSP (1), Independents (2) skipped the proceedings, reducing the effective strength of the House to 204.

The magic figure required was 103.

The BJP did not take part in the debate except for interventions and remained silent despite allegations thrown at it by the Congress and JDS members.

In his speech, Congress leader Siddaramaiah on Tuesday accused the BJP of trying to come to power through backdoor using bribery and “whosesale” trade of MLAs.

He said the 15 MLAs resigning was nothing but “wholesale trade.”

Siddaramaiah alleged that “Rs 20,25 and 30 crore” were offered to lure the MLAs and asked “Where did this money come from?”

Flashing the victory sign after the voting, BJP leader B.S. Yeddyurappa described the outcome as a “victory for democracy” as people were fed up with the Kumaraswamy government.

He assured the people of Karnataka that “an era of development” would start with BJP in power.

On the next step, Yeddyurappa said an appropriate decision would be taken “as early as possible.”

The government had defied two deadlines set by Governor Vajubhai Lala, who had asked Kumaraswamy to prove his majority on Friday itself, saying he had “prima facie satisfaction” that it has lost its majority confidence of the house.

The tumoil reached the climax after dramatic twists and turns that saw the MLAs of rival camps being corralled in resorts and hotels, allegations of bribery, rebel lawmakers knock the doors of the the Supreme Court to decide on the issues of whip, floor test and governor's intervention.

Kumaraswamy and the Congress had moved the Supreme Court accusing the Governor of interfering with the Assembly proceedings when the debate on the trust vote was underway and sought clarification on its July 17 order causing hindrance in issuing whip to the legislators.

The court had held that the MLAs cannot be compelled to participate in the Assembly proceedings.

The ruling coalition made frenetic efforts to win back the rebels with chief minister making a desperate appeal to them on Sunday to attend the session to save his ministry but they refused to budge, sealing the fate of his government.

Yeddyurappa had resigned as CM after being in office for three days before facing the trust vote in May last year.

Kumaraswamy, who succeeded him, had won the trust vote after forming the coalition government.