The farmers’ agitation is a movement against reforms 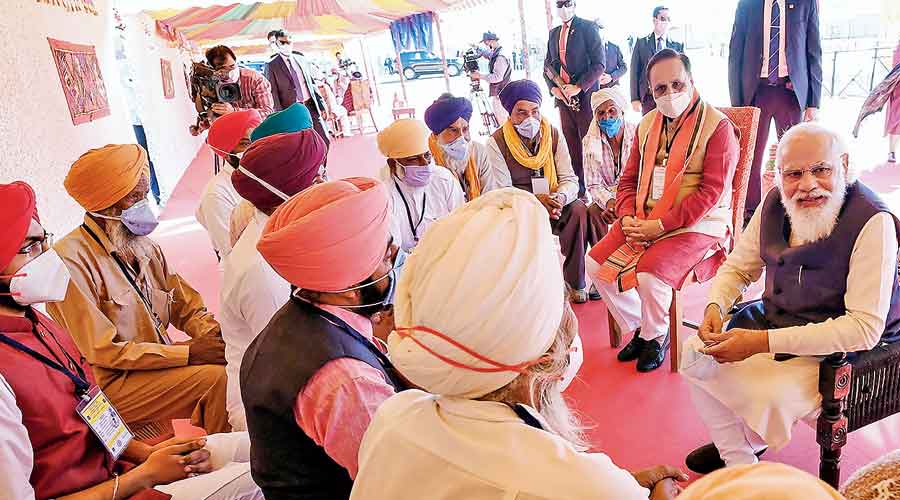 As India approaches yet another Republic Day, the political agenda — or, to be more accurate, the agenda that is projected as overriding by the media — is dominated by the issue of reforms. This is not unique. Since 1991, when an India crippled by political and economic mismanagement decided to change course — in the management of the national economy at least — the political agenda has been dictated by divergent attitudes to change. True, this was always the case since the first general election of 1951-52. The post-1991 difference was that unlike the era of total Congress dominance, competitive politics had evolved to the point where alternatives and options were available to the electorate at both the state and national levels.

The stir that is being witnessed in and around the national capital, Delhi, with farmers from Punjab, Haryana and western Uttar Pradesh teaming up with professional agitators has, predictably, attracted huge attention. Unlike the stereotype of ‘peasant’ agitations that fuelled the romantic imagination of an earlier generation, the protesters aren’t from the lowest and most impoverished sections of society. If the analysis of the economist, Surjit Bhalla, is to be believed, the sight of wizened old men and feisty ladies shivering in the winter rain but determined to fight for their entitlements is real but also deceptive.

Using official data, Bhalla has reinforced the impression that the movement being witnessed on the electronic media isn’t really born of economic desperation but stems from a dogged defence of existing privileges. It is, in short, a movement against reforms.

According to Bhalla, the top 2 lakh farmers of Punjab and Haryana have incomes that are among the top 8 per cent. More significant, the top 20,000 farmers have incomes that are in the top 2 per cent. Apart from the fact that agricultural income is free of income tax, wheat farmers enjoy a higher rate of return than rice farmers. Using data from the Commission for Agricultural Costs and Prices, the economist has calculated that “an average rice-farmer in India gets a return of 90% over costs excluding family labour; an average wheat farmer obtains a return of 161%.” Furthermore, the profits are markedly different across regions. “The Punjab farmer has the lowest cost of production, about 75% of average for wheat, and 59% of all-India average for paddy. The yields are also higher, with the net result that the Punjab-Haryana large farmer... earns Rs 1.25 lakh a year per ha from cultivation of wheat and paddy.” Additionally, the average holding of the 1,97,000 top farmers in Punjab and Haryana is 6.3 hectares. At “Rs 1.25 lakhs per hectare, this translates into an annual tax-free income of Rs 7.9 lakhs.” The largest farmers, with holdings of 12.6 hectares on an average, are estimated to have agricultural income of approximate Rs 15.75 lakh annually.

The fact that those protesting on the Delhi border aren’t exactly peasants engaged in subsistence farming — as nearly 90 per cent of agriculturists in West Bengal are — does not necessarily make this movement illegitimate or less worthy of national attention. It has about the same measure of significance as the protests of diamond traders and cloth merchants in Gujarat against the goods and services tax prior to the Gujarat assembly election of 2017. The social character of the agitation, however, explains a few things.

First, it explains why the movement is confined to what was once referred to as the Green Revolution tract. In other parts of India, where smaller farmers have the means of securing the minimum support price for wheat and rice, there is a natural attraction for the deregulation of the market and liberation from the middlemen who are the only real beneficiaries of the old APMC Act. The enacted reforms are also likely to spur investments in agro-industries, including cold storages. These investments have, so far, been patchy owing to earlier restrictions against ‘hoarding’ — restrictions that were put in place during the era of food shortages.

Secondly, the support extended to the agitating farmers by a galaxy of economists who had earlier been pressing on governments to undertake the most challenging of economic reforms may seem puzzling. It confirms that the objection is less to the song than the singer. This may explain why a substantial body of the orphaned Left has rallied behind a cause that in earlier decades would have been debunked as kulak. The intellectual support for the agitation is intimately connected with the fact that — for reasons of its own — the Narendra Modi government has effected a tectonic shift in the composition of ‘experts’ whose views it values.

Finally, the ongoing agitation, it is clear, is an instrument to put the Modi government on the back foot. This, again, is a natural goal of the Opposition, which is yet to fully recover from the drubbing it received in the 2019 general election. The Opposition had begun 2020 by instigating what was essentially a Muslim revolt against the Citizenship (Amendment) Act. This fulfilled a short-term function during the Delhi assembly election that the Bharatiya Janata Party lost miserably but its all-India objective was stymied by the outbreak of the Covid-19 pandemic. During the lockdown and its immediate aftermath, there was also an attempt to use the panic among migrant workers for partisan ends. However, this too had limited success, as was evident from the absence of any backlash during the Bihar assembly election the Opposition Grand Alliance hoped it would win but lost narrowly. The farmer’s agitation in Punjab and Haryana is another roll of the dice. The calculation is that if Modi steps back, it will have a knock-on effect and reduce its appetite for future reforms. And, if the reforms come to a screeching halt, the Modi government will lose its momentum and merely go through the motions for the rest of its second term.

The extent to which the prime minister has become a personal target for those who seek to put the quest for political power above reforms should not be underestimated. Whereas earlier governments had tried to manage reforms through stealth, Modi has expended his enormous political capital, particularly his image as a man of unimpeachable integrity, to accelerate the pace of change in India. Whether it is the expansion of banking services to reach the lowest layers of Indian society, managing the hiccups resulting from the introduction of GST and enlarging the quantum of tax compliance through a combination of carrot and stick, the prime minister has pushed through reforms relentlessly, believing that he has the political mandate to usher change. Nor has he been afraid of the political fracas that invariably results from change. Whether as chief minister in Gujarat and now as prime minister, he has a fanatical appetite to take risks in pursuit of a worthwhile objective. He has confronted challenges headlong, even if it has involved local difficulties — be it in Gujarat after the imposition of GST, in Assam and West Bengal after the CAA, and in coping with the understandable fear of rich farmers over losing their comfort zone. Modi, it would seem, has repeatedly threatened the cosy world of those who are comfortable in an unchanging realm where stagnation and political status quo go hand in hand.