The end of globalization

The world economy's crisis can be met in only two ways 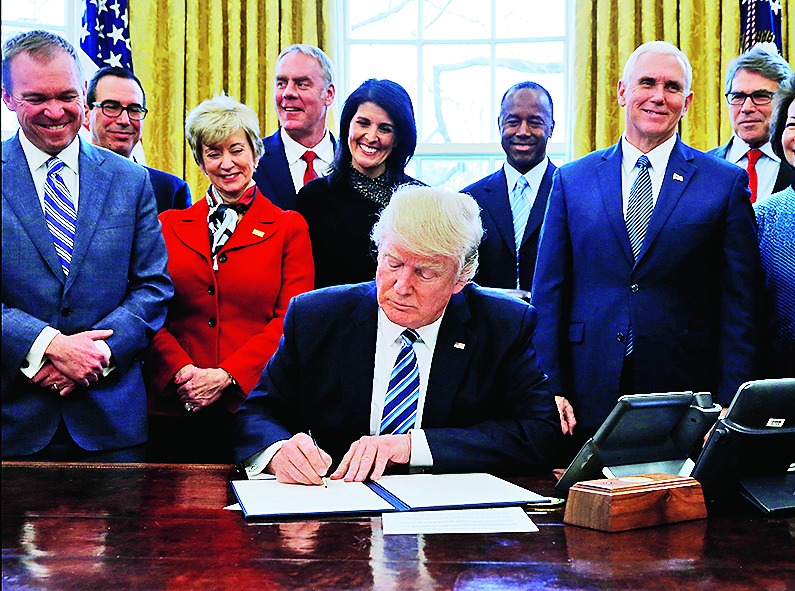 But even as he is protecting the US economy against imports from other countries, Trump is not increasing aggregate demand in the US in other ways. Increasing State expenditure through a larger fiscal deficit, or through enhanced taxation on the rich, who save a larger proportion of their incomes and whose tax payments therefore come substantially out of their savings, is the most obvious way of increasing aggregate demand. (Larger State expenditure financed by taxes on the working people who spend much of their income does not result in a net increase in aggregate demand). Trump, however, is not planning to increase taxes on the rich; on the contrary he is planning to reduce the corporate tax rate from 35 to 15 per cent. He has indicated a willingness to increase the fiscal deficit but the reason he is willing to do so is to accommodate this cut in corporate tax rates. In other words, he plans to increase the fiscal deficit to finance not larger State expenditure, but fiscal transfers to the rich.

This would not, however, increase aggregate demand. Since the rich consume a small proportion of their incomes at the margin, such transfers would scarcely raise their consumption. And since a rise in pre-tax profits per se does not induce larger investment unless the market is expanding already, and is expected to continue doing so, such transfers through a corporate tax-cut would not even cause larger private investment.

It follows therefore that Trump's strategy for reviving the US economy and increasing its employment rate envisages protection from imports, but largely precludes other ways of expanding aggregate demand in the US. It relies in short upon a 'beggar-my-neighbour' policy, which entails snatching demand from other countries in a world where the overall market-size is not increasing. It amounts, as already mentioned, to exporting unemployment from the US to the other countries of the world.

Such a policy can work only if the other countries that are hurt by US protectionism do not retaliate by imposing their own restrictions on imports from the US. If they do, then such competitive 'beggar-my-neighbour' policies would not only not bring about any increase in employment anywhere at all, including in the US, which started this protectionism; but it could even worsen the state of the world economy, and hence of all the countries collectively. This could happen because competitive resort to protectionism across the world would further reduce the inducement to invest on the part of the capitalists, worsening the world economic crisis.

Trump's strategy for increasing employment in the US economy, therefore, presupposes that even as the US imposes protectionist measures against other countries, they do not retaliate; that is, they sit tight, even as unemployment is exported from the US to their economies. It presupposes, in short, that the US would be able to impose upon the world a regime of 'one-way free trade' (where the US protects itself from imports but others accept free trade), the way Britain had been able to do during much of its imperial history.

Either way, however, it portends the end of the current period of globalization. If the US does succeed in imposing 'one-way-free-trade', then we are back to the earlier days of colonialism with its palpable manifestation of unequal power, in lieu of the apparent symmetry of globalization. If the US does not succeed in imposing 'one-way-free-trade', then we have competitive protectionism, where the main hallmark of the current globalization, namely freer movement across the world of goods, services and capital, including of capital in the form of finance, would have disappeared.

But the cul-de-sac that globalization has run into is not a product merely of Trump's policies; it is structural in nature. If the world economy is to recover from the protracted crisis to which it has sunk after the collapse of the US housing 'bubble' in 2008, then there has to be a revival of global aggregate demand. Since monetary policy has proved to be singularly incapable of bringing about any such revival (even with a zero rate of interest the US is unable to make any noticeable dent upon the unemployment scenario), such a revival of aggregate demand can occur only through fiscal intervention.

Finance capital, however, is invariably and implacably opposed to State intervention through fiscal means to directly increase aggregate demand; and in a world where finance capital is globalized while the State remains a nation-state, its opposition acquires decisive force, for any State that dares to go against its will, runs the risk of a financial outflow, precipitating a financial crisis and bankruptcy within its shores. Nation-states caught in the web of globalization, of which globalization of finance is a central feature, must therefore eschew any fiscal intervention for stimulating demand. This in turn implies that the world economy continues to remain trapped within a crisis caused by insufficient aggregate demand.

Leaving aside the temporary palliative that an occasional 'bubble' in asset prices can offer, and also leaving aside the possibility of a particular country improving its position through the successful pursuit of a 'beggar-my-neighbour' policy of the sort that Trump is attempting, there are only two possible ways that the world economy can come out of the existing crisis. One is if several nation-states pursue a coordinated fiscal stimulus. Even though a stimulus of this sort would be against the wishes of global finance, it cannot in such a case resort to a flight from one country to another, since all would be engaged in active fiscal intervention. The other way is if individual countries delink themselves from globalization, especially from the vortex of globalized financial flows, by putting in place capital controls, and then pursue active fiscal intervention; they would also need to have trade controls in such a case to ensure that the trade deficit remains manageable.

Each of these ways of coming out of the crisis however entails overcoming the opposition of finance capital; and that is not easy. Indeed, the idea of a co-ordinated fiscal stimulus being undertaken by several major countries together had been mooted during the Great Depression of the 1930s itself. John Maynard Keynes had suggested it; and, even before he had done so, a group of German trade unionists had come up with this same proposal. But, as Charles Kindleberger suggests, the stout opposition of finance capital had torpedoed all such proposals. The opposition by finance capital to any such idea in the present context will be no less stout, and even more effective, since it occupies an even more hegemonic position in the current regime of globalization. And there are no global movements, either of workers, or of peasants, or of the two together, to counter politically this opposition of finance to a coordinated fiscal intervention.

Such political mobilization, for countering the opposition of finance to fiscal intervention in order to overcome the crisis, is much more feasible within particular countries. The fact that Trump has not taken on the hegemony of finance, and has not proposed larger State expenditure financed by a fiscal deficit, but instead has confined himself to imposing a 'beggar-my-neighbour' policy on other countries, reflects only his class bias; it does not indicate that this alternative is foreclosed.

But the political mobilization of workers, peasants, agricultural labourers and petty producers of all descriptions within particular countries - needed for overcoming the hegemony of finance capital, and for putting in place an alternative strategy for revival - though it may accept the overall framework of a capitalist economy to start with, may not remain confined to this framework. It may well start a dynamics that becomes the harbinger of a new order going beyond capitalism.

In short new possibilities are opening up today which entail the end of the current globalization. Ironically, this globalization was advertised not long ago as constituting the end of history.