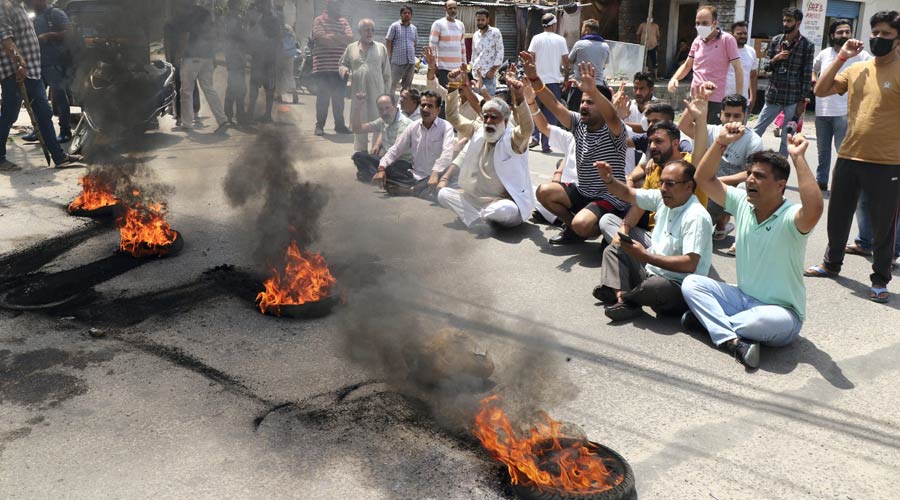 As many as nine civilians, including Pandits, have been killed by militants, leading to fears of a renewed spate of targeted killings and of an exodus.
File photo
The Editorial Board   |   Published 07.06.22, 04:05 AM

The Bharatiya Janata Party’s rhetoric of normalcy in Kashmir is unravelling — and at an alarming pace. Two years ago, India had been informed by the prime minister that stripping J&K of its statehood in a shocking, unilateral decision by his government would facilitate greater integration between the region and the country. The Union home minister had chimed, as recently as March this year, that the security forces now had a firm grasp on militancy. Both these claims have turned out to be specious. The proof lies in blood: the blood of slain Pandits who have, ironically, been vocal supporters of the BJP. As many as nine civilians, including Pandits, have been killed by militants, leading to fears of a renewed spate of targeted killings and of an exodus. Shamefully, the administration has been accused of forcefully hindering the movement of the besieged community; there seems to be few takers for the BJP’s pledge of safety. To add to the government’s headache, Dalit government employees in Jammu have begun massive protests amidst allegations that they were forced to take up postings in the Valley because of a skewed reservation policy that benefits Jammu’s caste Hindus.

These little schisms are the hallmark of the BJP’s politics. It lights little fires — religious, political, economic — fans the flames for electoral gains, ignoring the signs of a fire till it is too late. Its Kashmir policy is a testament to its obduracy. The alienation that Kashmir has experienced of late has been the fall out of a string of unwise decisions: the abrogation of Article 370; shackling a sullen people to an overwhelming military presence; tampering with policy to usher in changes to domicile status and demography that have unnerved both the Valley and Jammu; fanning propaganda — the Centre’s advocacy of the twisted message in The Kashmir Files is an example — to deepen the divide among communities and so on. Two common elements of these policies have been a persistent polarising ethic and a marked indifference towards the trials and aspirations of the ordinary Kashmiri. This is a risky ploy, given Kashmir’s complex history and its strategic location. India’s western neighbour would be only too happy to fan the flames. A turnaround in Kashmir can only begin with a conversation with all stakeholders. But the BJP is only good at loose talk on Kashmir.