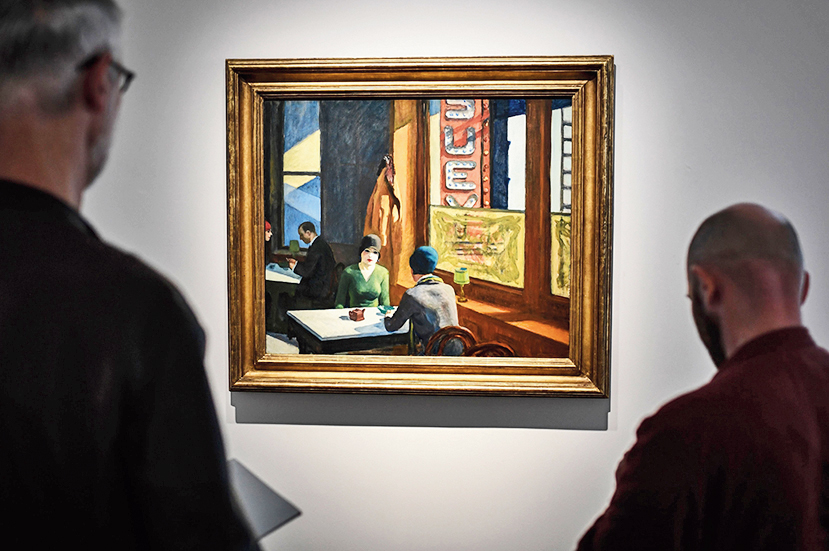 Visitors admire "Chop Suey" by US artist Edward Hopper, part of the Barney A Ebsworth Collection, during a presentation at Christie's auction house in Paris
Stephane De Sakutin
The Telegraph   |   Published 21.11.18, 09:39 AM

Sir — A 1929 painting by Edward Hopper, 'Chop Suey', was recently auctioned at Christie’s for almost $92 million (“Hopper painting sells for $91m”, Nov 15). What is unfortunate, however, is that most painters are celebrated only long after their deaths. Like Vincent van Gogh, Hopper, too, had to struggle for years in order to achieve success as a painter. It would be considerate of both governments and art enthusiasts — especially those who can afford to spend such exorbitant amounts for private collections — to support contemporary artists financially.

Sir — In his speech at the Arc de Triomphe, Paris, commemorating the 100th anniversary of the armistice that brought World War I to an end, the president of France, Emmanuel Macron, shed light on the difference between nationalism and patriotism (“Nation first”, Nov 14). Most people think that the two words mean the same, but that is not actually the case, even though both are related to an individual’s sentiments towards his nation.

The president of the United States of America, Donald Trump, has been beating the drum for nationalism with his rhetoric of “America First”. He has also aggressively pushed isolationist policies and been disparaging of entities like the European Union, claiming that other countries have been taking advantage of the US. However, the US itself was created by the coming together of 13 colonies as early as 1776. Why, then, is Trump averse to the idea of international cooperation now?

Patriotism can be understood as a love for and pride in one’s country for what it accomplishes, whereas nationalism involves considering one’s country as being superior to all others, irrespective of its real achievements. This engenders rivalry and resentment. Like George Orwell once wrote, nationalism is “the worst enemy of peace”. True patriotism is the impulse to defend one’s land, country or way of life, even against unjust royal or governmental oppression. This was evident in the revolts against the regime of Louis XVI of France or the Hosni Mubarak government in Egypt.

India has traditionally had an inclusive social fabric. It is the largest secular democracy in the world. Thrusting a particular ideology upon the people in the name of patriotism — as is currently being done — is divisive and dangerous.

Sir — On Armistice Day this year, several world leaders gathered to condemn international rivalry and emphasized the need for peace and harmony. In his speech, the French president warned against nations looking only after their own interests. Evidently, the prerogative of the leaders was to prevent differences over bilateral issues from escalating into violence.

Another world war may not seem imminent at the moment, but does that mean that belligerent nationalism has ended? Have leaders like the US president, Donald Trump, and the Israeli prime minister, Benjamin Netanyahu, stopped bullying weaker countries into toeing their line under the threat of grave consequences?

The situation is hardly any different in India. The prime minister, Narendra Modi, projects himself as an ambassador of peace. He spends large amounts of money from the national exchequer to visit foreign countries and signs treaties that are apparently designed for a better world order. But what about the situation at home? Modi maintains a studied silence on religious intolerance practised by Hindutvavadis, often manifest in lynchings and murders. Why is there such a big gap between his promise and performance? Is this not tantamount to a grave crisis within the country he leads? The politics of fear, both within and outside one’s nation, is no less dangerous than an actual world war. This tide has to be stemmed at any cost.

Sir — On Remembrance Day, leaders from around the world congregated in Paris to pay their respects. It was a fresh opportunity to think about the wars that must be avoided today. At present, the world powers spend considerably more on defence and war-preparedness than before. They are capable of waging wars many times more lethal than the two world wars put together. Global powers are engaged in skirmishes across the world, like in Syria and Somalia, which have the potential to flare up beyond redemption.

Sir — While commemorating Armistice Day in Paris, Emmanuel Macron sought to remind the assembled leaders from across the world that nationalism and patriotism are not synonyms but antonyms. Perhaps it was the idea of nationalism promoted by the American president, through his refrain of “America First”, which provoked Macron to drive home this truth. In fact, nationalism and patriotism should not be at loggerheads. They must complement each other. Faux-nationalism and faux-patriotism hurt the fabric of society. Pandering to extremism in any form — nationalistic, patriotic or religious — could lead to an irrevocable crisis. America under Donald Trump and India under Narendra Modi have been experiencing this dangerous phenomenon.