Letters to the Editor: Human love for pets 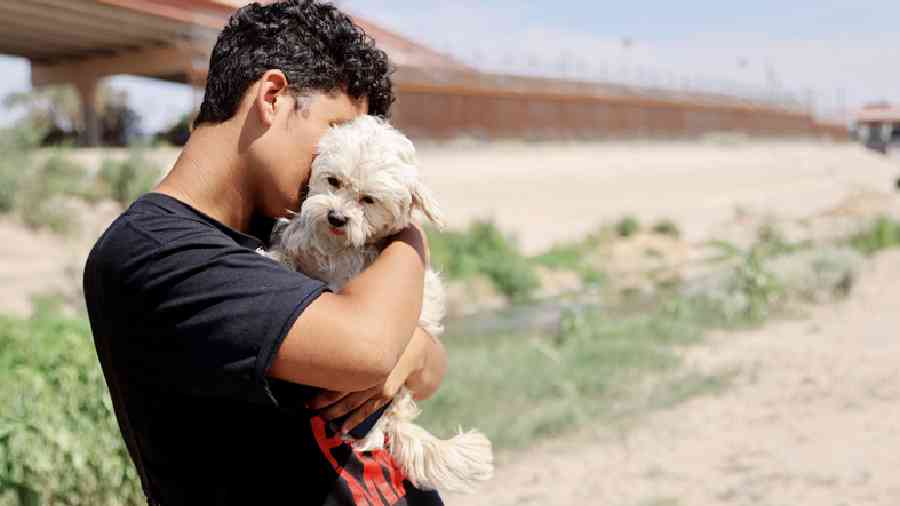 A Venezuelan migrant, Brayan Pinto, who trekked several countries to reach the US-Mexico border, was forced to leave behind his beloved companion, a Pekingese-toy poodle mix, as the authorities did not allow the dog to cross the border
The Editorial Board   |   Published 21.09.22, 02:55 AM

Sir — Conflict and chaos can force people to take stock of what they hold dear. A Venezuelan migrant, Brayan Pinto, who trekked several countries to reach the US-Mexico border, was forced to leave behind his beloved companion, a Pekingese-toy poodle mix, as the authorities did not allow the dog to cross the border. Hearteningly, a photojournalist has agreed to care for the pooch for now. But Pinto has lamented that it is akin to “leaving a family member” behind. When war broke out in Ukraine, many people fleeing the country were seen travelling with their pets; some refused to leave unless they could take their pets along. There are many who argue that nothing matters more than human lives, but those who have loved and cared for animals will disagree.

Sir — The former chief minister of Punjab, Amarinder Singh, has joined the Bharatiya Janata Party along with his supporters (“A year on, final act in Amarinder drama”, Sept 20). Singh merged the Punjab Lok Congress — he floated the PLC last year after parting ways with the Congress — with the BJP. The PLC had fought the Punjab assembly elections earlier this year but failed to make any inroads.  Singh’s move to the BJP will give the party a much-needed boost in the state and provide an acceptable face to the predominantly Sikh voters. Furthermore, the former chief minister has a long and illustrious history of public service. This could help the BJP in the long run.

Sir — It is not surprising that the Amarinder Singh-led PLC has decided to merge with the BJP. In spite of his unceremonious departure from the Congress, Singh still holds significant influence in Punjab which can come in handy for the BJP for the 2024 Lok Sabha elections.   The now-withdrawn farm bills and the BJP’s initital inflexibility on the farmer’s protests decimated its political standing in the state. It will have to change its strategy if it hopes to woo voters. Singh could soon emerge as a key player for the BJP in Punjab.

Sir — Amarinder Singh has insisted that he has joined the BJP because unlike the Congress, the saffron party is looking after the interests of the nation. It is shocking that Singh, who was vehemently opposed to the BJP prior to his sudden departure from the Congress, is now praising it. The former chief minister of Punjab should have held on to his ideological position. His bonhomie with the BJP may not be taken kindly by the people of Punjab.

Sir — Last week, at the Mindmine Summit 2022 in Delhi, the Union finance minister, Nirmala Sitharaman,  asked Indian businesses why they are not investing in the economy at a time when foreign direct investors and portfolio investors as well as domestic retail investors are keen on investing in it. It is astonishing to think that the finance minister does not already know the answer to this. Over the last few years, the Indian economy has taken a beating because of faulty decision-making and excessive government interference. Female employment rate in India has drastically fallen since the outbreak of the Covid-19 pandemic and suicides among the youth and daily wage workers are on the rise. Much of the crisis faced by Indian society today is linked to economic woes. The Centre must pay attention to these immediate problems before it can expect robust investments.

Sir — Students of a private university in Mohali, Punjab recently held protests on campus after objectionable videos of several women students were posted on social media. The chief minister of Punjab, Bhagwant Mann, has expressed anguish over the incident and ordered a probe. So far, the police have arrested a female student who is allegedly one of the people responsible for the misdeed. The Punjab Police must investigate this matter swiftly and ensure that the culprits are brought to book.

Sir — It is shocking that videos of several female students of a private university in Punjab have been circulated. It is a matter of shame that young students have fallen prey to such criminal behaviour. The authorities must ensure that justice is served.

Sir — Online grocery aggregators like Blinkit, Big Basket, Swiggy and others promise to deliver goods in 10 minutes. This is simply a marketing gimmick. Why would people need groceries to be delivered within 10 or 15 minutes? Such short delivery windows require delivery personnel to drive fast to meet the deadlines, increasing the risk of road accidents. Companies must not put their employees at risk.

Sir — Food and grocery delivery personnel drive rashly to meet the impossible deadlines set by their employers. This is dangerous. There is simply no need to risk one’s life and limb to deliver a bag of vegetables.

Sir — The article, “Baddie badly missed” (Sept 18), by Bharathi S. Pradhan discusses the pivotal role played by villains in Bollywood movies. The deeds of the hero assume greater importance only when juxtaposed against the actions of the villain. Many recent Bollywood movies — Brahmastra, for instance — lack strong villains. Directors must understand that villains are integral to any storyline.