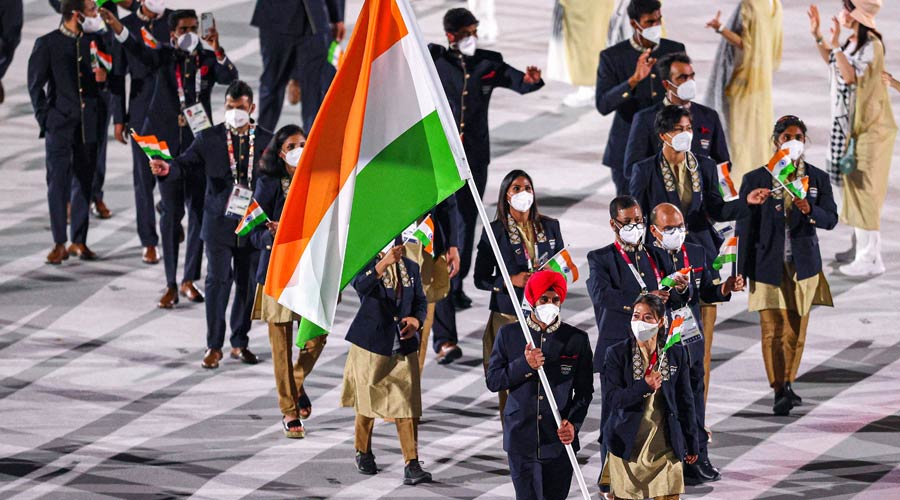 India’s medal tally at the London Olympics was impressive — it had won six medals, of which two were silver and four were bronze. At the Tokyo Games, which conclude today, India has surpassed all expectations by putting up its best-ever performance at the Olympics — it has won a gold, two silver and four bronze medals.
File picture
The Editorial Board   |   Published 08.08.21, 12:57 AM

The value of perspective cannot be overstated, especially when the odds that have to be battled are formidable. Indian athletes, in particular, are regularly expected to perform in situations where the odds are heavily stacked against them; that they are often able to give the nation the honour of a podium finish in spite of innumerable roadblocks is a testament to their grit and excellence. India’s medal tally at the London Olympics was impressive — it had won six medals, of which two were silver and four were bronze. At the Tokyo Games, which conclude today, India has surpassed all expectations by putting up its best-ever performance at the Olympics — it has won a gold, two silver and four bronze medals. For this, the nation’s Olympians must be lauded, not least because their achievements come at a time when training for sportspersons has run into immense challenges owing to the global pandemic.

There are other, equally pressing, reasons for acknowledging the athletes’ achievements. Their success seems to be falling prey to the oldest trick in the book of the political fraternity — politicians claiming credit for the achievements of sportspersons. Not only did the prime minister say that the Indian women’s hockey team embodies the ‘spirit of New India’ — a phrase synonymous with the Bharatiya Janata Party’s political ascendance — but posters praising the bronze-winning boxer, Lovlina Borgohain, featured photographs of the Assam chief minister, Himanta Biswa Sarma, and the state’s sports minister, Bimal Borah; Ms Borgohain’s image, interestingly, has gone missing from the posters. The self-congratulatory stance adopted by Indian leaders is only made worse by the irony of their actions — in an Olympic year, the Union government slashed the sports budget by Rs 230.78 crore. This would have a direct impact on resources related to training, infrastructure and sponsorship, all of which play a key role in a sportsperson’s ability to win medals. In stark contrast, China, India’s regional competitor, plans to make sports a $773 billion industry by 2025, a 70 per cent increase from 2019.

An Olympic gold in a track-and-field event is inspiring, but India’s total kitty of medals remains modest, especially in view of its population and the fact that it sent its biggest-ever contingent of athletes to Tokyo. The absence of institutional support is one part of the problem; Indian sportspersons also have to contend with the lack of a thriving sporting culture that prioritizes excellence. This makes the model adopted by Odisha for bolstering hockey talent worth emulating: it has, in recent years, been the principal sponsor for the men’s and women’s hockey teams, both of which made history by reaching the semi-finals, with the men’s team clinching the bronze. The template of providing funds, building modern training facilities and hosting quality competitions along with the creation of a robust sporting network at the grass roots seems to be yielding dividends in sharp contrast to the limited success of Central programmes like ‘Khelo India’. The government and citizens must perceive sport as a potential driver of the economy that can generate employment and attract investment. What Odisha has thought today, the rest of India must do tomorrow.