Donald Trump is running concentration camps at the border

Why are Americans not in the streets every day, demanding an end to this atrocity? 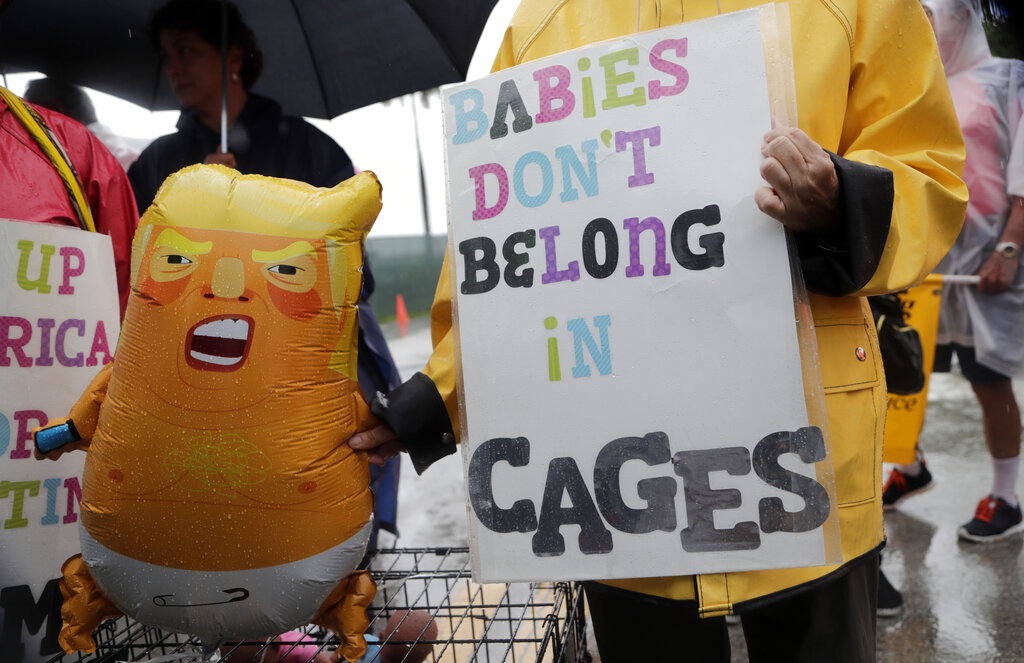 I have often wondered why good people of good conscience don’t respond to things like slavery or the Holocaust or human rights abuse.

Maybe they simply became numb to the horrific way we now rarely think about or discuss the men still being held at Guantánamo Bay without charge or trial, and who may as well die there.

Maybe people grow weary of wrestling with their anger and helplessness, and shunt the thought to the back of their minds and try to simply go on with life, dealing with spouses and children, making dinner and making beds.

Maybe there is simply this giant, silent, cold thing drifting through the culture like an iceberg that barely pierces the surface.

I believe that we will one day reflect on this period in American history where migrant children are being separated from their parents, some having been kept in cages, and think to ourselves: How did this happen?

Why were we not in the streets every day demanding an end to this atrocity? How did we just go on with our lives, disgusted but not distracted?

Thousands of migrant children have now been separated from their parents.

As NBC News reported in May:

“At least seven children are known to have died in immigration custody since last year, after almost a decade in which no child reportedly died while in the custody of U.S. Customs and Border Protection.”

And, last week, an attorney for the Trump administration argued before an incredulous panel of judges on the 9th U.S. Circuit Court of Appeals that toothbrushes, soap and appropriate sleeping arrangements were not necessary for the government to meet its requirement to keep migrant children in “safe and sanitary” conditions.

Detainees do not lose their human rights because they immigrated illegally

As one of the judges asked the attorney:

“Are you arguing seriously that you do not read the agreement as requiring you do something other than what I described: Cold all night long. Lights on all night long. Sleep on the concrete floor and you get an aluminum blanket?”

Stop and think about that. Not only do these children in question not have beds, they are not even turning off the lights so that they can go to sleep. Sleep deprivation is a form of torture, plain and simple.

An Associated Press report last week discussed the descriptions by lawyers of “inadequate food, water and sanitation for the 250 infants, children and teens” at a Texas border patrol station.

According to the report:

“A 2-year-old boy locked in detention wants to be held all the time. A few girls, ages 10 to 15, say they’ve been doing their best to feed and soothe the clingy toddler who was handed to them by a guard days ago.”

The report explained at another point:

“Three girls told attorneys they were trying to take care of the 2-year-old boy, who had wet his pants and had no diaper and was wearing a mucus-smeared shirt when the legal team encountered him.”

The report described at another point:

“A 14-year-old girl from Guatemala said she had been holding two little girls in her lap. ‘I need comfort, too. I am bigger than they are, but I am a child, too,’ she said.”

Anyone whose heart doesn’t break upon reading that is a monster. And yet, too many Americans seem perfectly OK with these conditions. Last year, Fox News’s Laura Ingraham compared child detention centers to “summer camps.” These are not summer camps. They are closer to what Rep. Alexandria Ocasio-Cortez called them: concentration camps.

She received quite a bit of blowback for that description, her critics complaining that the term was too closely tied to the ghastly horrors of the Holocaust.

No one wants to be accused of invoking Godwin’s law: “As an online discussion continues, the probability of a reference or comparison to Hitler or the Nazis approaches 1.” In other words, 100%.

“Last comment on this: ‘concentration camp’ is an extremely charged term and I get why many people are, in good faith, uncomfortable with its application for Godwin’s Law purposes among others. So let’s just call them “detention camps” and focus on what’s happening in them.”

The creator of the law himself, Mike Godwin, responded:

“Chris, I think they’re concentration camps. Keep in mind that one of their functions by design is to punish those individuals and families who are detained. So even the “charged” term is appropriate.”

Folks, we can use any form of fuzzy language we want, but the United States under Donald Trump is currently engaged in an unconscionable act. He promised to crack down on immigrants and yet under him immigrants seeking asylum have surged. And he is meeting the surge with indescribable cruelty.

Donald Trump is running concentration camps at the border. The question remains: what are we going to do about it?