The real secret of dealing with him? Throw him a fish, and he will go away 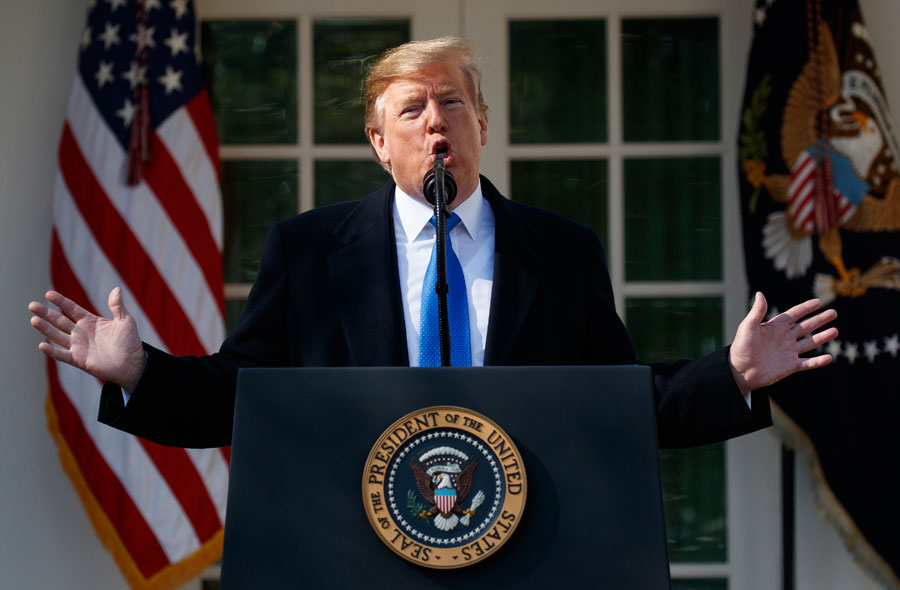 Donald Trump speaks in the Rose Garden at the White House in Washington, D.C., to declare a national emergency in order to build the US-Mexico border wall on Friday, February 15
(AP)
Gwynne Dyer   |   Published 25.02.19, 09:57 AM

Donald Trump is a man of his word, and he promised his ‘base’ a wall on the United States of America’s border with Mexico to stop the “invasion of gangs, invasion of drugs, invasion of people”. It turns out that Mexico is not willing to pay for it after all. But a promise is a promise. So he has declared a fake ‘national emergency’ to get his hands on the money he needs.

It is fake because the days when huge numbers of illegal immigrants were trying to come in across the 3,200 kilometre-long border are long past. Fifteen years ago it was more than a million and a half people a year. It had fallen to 4,00,000 by the middle of Barack Obama’s first term in 2010, and has not exceeded that number since. The wall is largely symbolic, but it is a very important symbol for Trump. It was one of the key promises he made to the true believers in his ‘base’, and it is striking how angry they got when it looked like he would be thwarted by Congress. As Ann Coulter said: “The only national emergency is that our president is an idiot.”

But the ‘national emergency’ will probably do the trick for Trump. It will face all sorts of legal challenges, but the rules for declaring national emergencies are so vague and the precedents so numerous that he will probably win in the courts in the end. In the meantime, he will have around $8 billion to play with, mostly taken from the military and disaster-relief budgets. It is only a third of what it would take to build a full border wall, but it will let Trump look busy and persuade the ‘base’ that he is making progress.

So there is one promise kept, more or less. The other two that really count are his promise to “bring the jobs back” and his commitment to outlaw abortion. He cannot bring the jobs back because they never left. The vast majority (around 85 per cent) of American manufacturing jobs lost since the turn of the century were killed by automation, not free trade. But the fantasy statistics about near-full employment pumped out by the government may suffice to keep his base quiet, even if jobs are strangely scarce or low-paying around where they live.

What Trump does need to deliver on is banning abortion. He cannot do that himself, of course, but he promised to appoint ‘pro-life’ justices to the Supreme Court during the election campaign. He has probably managed to create an anti-abortion majority in the Supreme Court by now (although you can never tell with judges). But there is a problem for him and the Republican Party if he delivers on that promise.

Some 47 per cent of white women voted for Trump in 2016, but around half of them were not part of his ‘base’. They were just traditional Republicans who voted as they always did, some of them perhaps holding their noses this time. If the Supreme Court reversed its historic 1973 Roe versus Wade decision that made abortion legal throughout the United States, a lot of these women would be very cross with Trump and the Republican Party. Given that Trump only won by a hair’s breadth in 2016, he cannot afford to lose their votes.

Therefore he definitely does not need a big win on Roe vs Wade in 2019 if he wants to be re-elected in 2020. Does he know this? It is his own future at stake here, and he is usually very alert to developments that might threaten it. He cannot really control what the Supreme Court might decide, but he will be hoping that they just nibble at the fringes of the issue, not reverse Roe vs Wade outright. And the Supreme Court is quite likely to do just that, because senior judges hate to overthrow decisions of long standing that enjoy wide acceptance in the society. (Two-thirds of Americans support the current law.)

Trump does not care about the outcome on most issues, probably including this one. He just wants a ‘win’, and he can conjure it up out of the most unpromising material. If the judges make a few minor changes to the law, he will portray it as a triumph and drop the subject. The real secret of dealing with Trump? Throw him a fish, and he will go away.