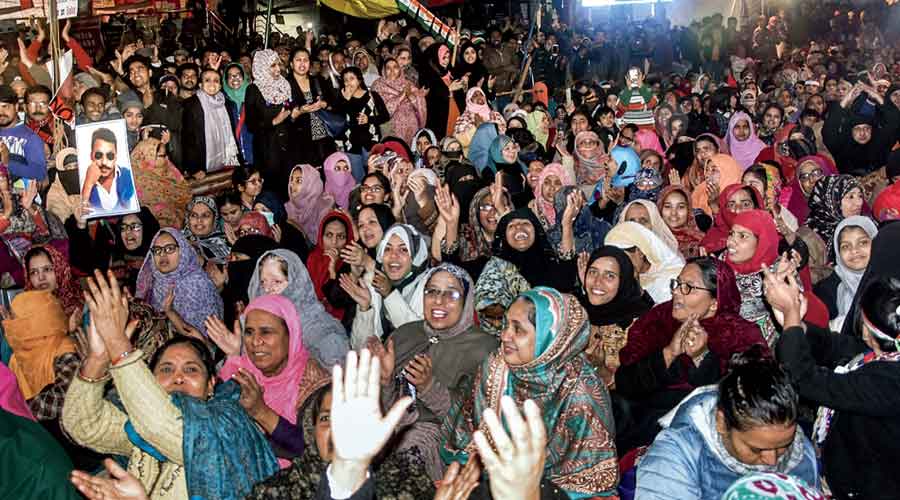 Muslim women from a locality of that name came out of their houses and sat on the ground close by: without fuss, they said this was their land and they would not leave it for CAA or NRC or anything else
File picture
The Editorial Board   |     |   Published 19.07.20, 12:20 AM

The Narendra Modi government had given India a unique gift; it is sheer bad luck that the novel coronavirus should compel its withdrawal. The gift was not willingly given, but had the government not pushed through the Citizenship (Amendment) Act and the National Register of Citizens for the whole country then the months-long sit-in at Shaheen Bagh, Delhi would not have happened. At the time, the government was on a roll, pushing through legislations on the strength of its majority in Parliament against protests from the Opposition and sections of the people as though democracy was just a crude matter of numbers, ignoring questions about the discriminatory purpose of the CAA and the possible exclusionary intention of the NRC, while allowing the violent repression of protests. Then Shaheen Bagh happened.

Muslim women from a locality of that name came out of their houses and sat on the ground close by: without fuss, they said this was their land and they would not leave it for CAA or NRC or anything else. Their gathering radiated peace, goodwill and welcome — the prime minister never did accept their repeated invitation to tea so that they could ‘talk’ — and they spoke of no religious cause. They held up the Constitution and the Indian flag. Their presence, day after day, even through the Delhi winter, showed India what peaceful protest is like: immovable, democratic — there were no leaders, only organizers — and completely disciplined, united in a common purpose. It was as though elements from the visions of Gandhi and Ambedkar, whose picture was displayed, had taken shape. Only political leaders with their speeches were forbidden. The women’s presence under their own agency was a glorious example of the equality the Constitution aims at. They came from precisely that segment of the population that various shades of political and privileged opinion, with condescending concern, consider to be backward, voiceless and put upon in their own society. Shaheen Bagh gave divided and misogynistic India that immemorial moment when not just members of a community often discriminated against, but its women, led a quiet and intransigent protest movement that no one could match. Its hold on constitutional ideals was unmatched too. Muslim women led a truly secular movement which all communities, classes, ages and genders could join, help or participate in, and which spawned similar movements across the country. Shaheen Bagh shone as a microcosm of what India was meant to be — and can still become.

No pandemic can take Shaheen Bagh away. That two books have been published on it is one manifestation of the deep impression it has made on many. The character of the protest would ensure that many more would have felt its transforming touch than the books can reach. It is now a reference point, a dream of the possible, a revelation of potential to which, irrespective of text books, history can keep aspiring.

Shaheen shut down? Not from collective memory