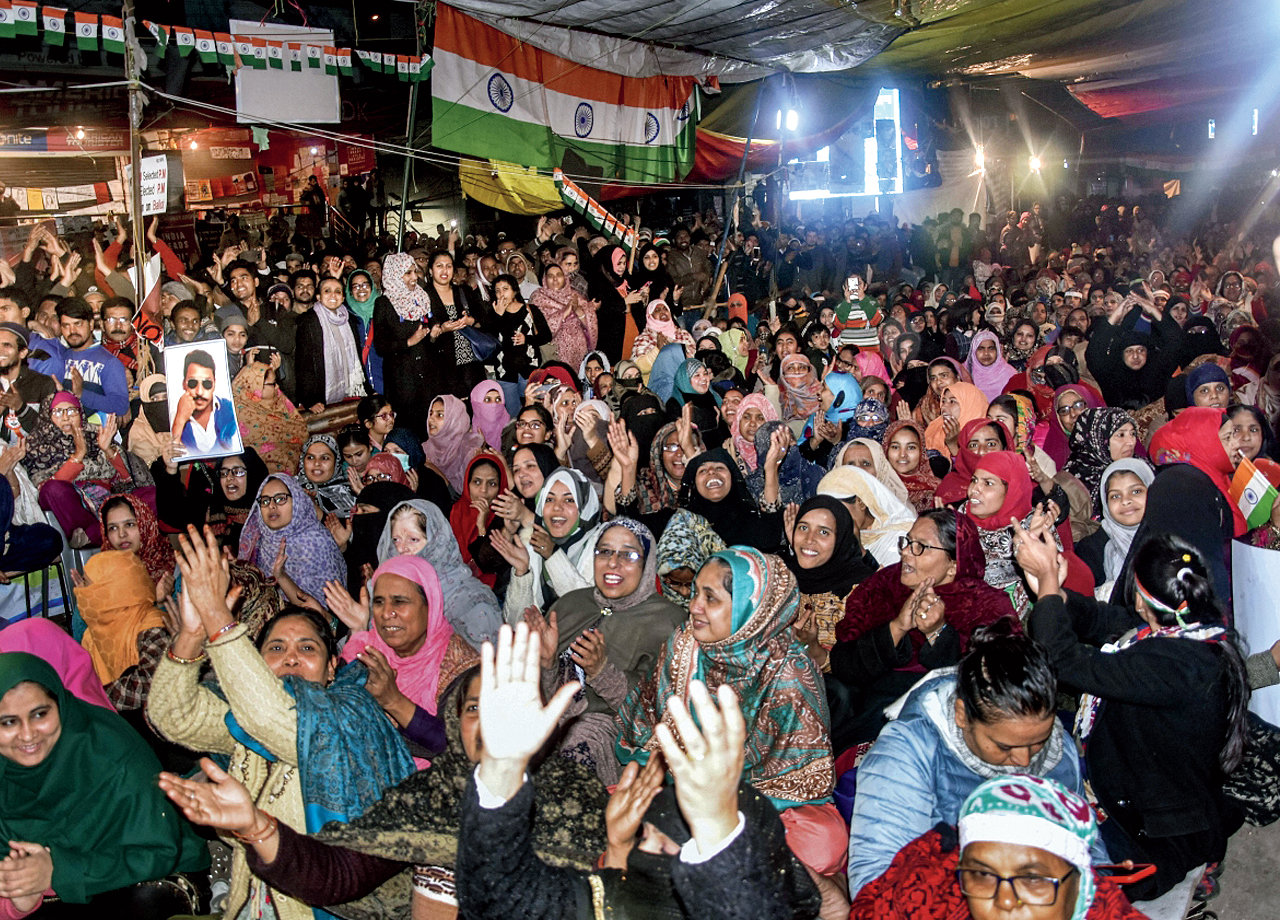 The persistent demand the protesting women raised was that someone in authority must come and talk to them. None ventured to do so. That is the measure of Shaheen Bagh’s achievement.
(PTI)
Mani Shankar Aiyar   |   Published 19.04.20, 08:35 PM

The over 100-day relay protest at Shaheen Bagh is over. The protesters have not been thwarted by the government but by a malevolent force of nature — Covid-19. That was the only force that could have ended their resolve. But they and their millions of supporters, among whom, with pride, my family and I number ourselves, have not abandoned their cause. This is just a pandemic-enforced pause. The struggle continues in the hearts of the women of Jamia Nagar who launched the demonstration and inspired uncounted numbers in over a hundred campuses and thousands upon thousands of mohallas around the country to conduct their own local protests. I addressed three of these mini-Shaheen Baghs in my remote former constituency of Mayiladuturai alone. That is at the other end of the country where virtually no one speaks any Hindi or Urdu. Language was not a barrier. A Tamil version of Faiz’s “Hum dekhenge” became a hit song.

The specific political and legislative achievement of the protest has been to drive the prime minister on to the back foot by getting him to claim before the whole nation that his government had not even considered the National Population Register and the National Register of Citizens, flatly contradicting his comrade-in-arms, the home minister who had, among others, according to one widely reported count, affirmed the ineluctability of the link no less than nine times on the floor of Parliament. But that is only one battle won in the war for the country’s soul. That war still remains to be won. The protesters have taken the establishment in the flank. The struggle continues.

Never before in the history of our land, or in the history of Islam, have women taken the lead. It was Muslim women (identified by the prime minister in the hint that the demonstrators could be identified by their clothes) who showed that the hijab might hide their faces but could not silence their tongues. Fearlessly braving the biting cold, in the worst winter Delhi has experienced in 117 years, these Muslim women, many with their infants and children wrapped tightly to their waist, showed the way to their menfolk. What is still more impressive is that their menfolk humbly accepted their secondary role, helping with water, serving food, standing guard on the periphery, managing entry into the premises to prevent agents provocateurs from disrupting the proceedings, while the women constituted the bulk of the protesters sitting in the pandal. It was also the women who were mostly taking the mike. And it was their shrill voices that raised the reverberating slogans, giving the whole gathering the opportunity to participate as one and equals in the protest.

What more than anything else outwitted their powerful opponents was these women emerging from their cloistered homes in such large and determined numbers, belying the false narrative of the Hindutvists that Muslim women are frightened, oppressed creatures. Moreover, it was their relentless refusal to resort to violence or say anything offensive to nationalist or religious sensitivities that added to the bewilderment of the stereotyping in the saffron mind. Not even the vicious violence unleashed on their co-religionists in Northeast Delhi shook them from their purpose. They stayed, bold and fearless, and refrained from any counter-violence or threats of counter-violence. Their only claim was their right to be Indian. Not for them the Holy Quran but the Holy Tricolour. To reinforce this claim, the gathering amounted to a daily lesson in the Constitution. So often was the Preamble read and recited that it was the first time a National Law School was taken out on to the street. Their heroes represented in the portraits that adorned the shamiana were only those of our freedom movement but, by the same token, represented also the wide diversity of those who came together to fight for Independence: Mahatma Gandhi and Bhagat Singh; Ambedkar; Jawaharlal Nehru and, yes, Abul Kalam Azad. Jinnah was conspicuous by his absence. There was no Islamic preacher, no mullah, no maulana, no ulema to be seen. And, wonder of wonders, in the audience and mingling with the protesters were women and men of all religions, the Sikhs being among the most prominent. The atmosphere was so festive that my daughter not only went there week after week to decorate the protesters’ palms with intricate designs in mehndi, but also to celebrate Basant Panchami and Holi. This was non-denominational India standing up for citizens’ rights, this was plural India standing up for unity in diversity, this was secular India protesting religion-based discrimination.

So powerful was this wholly non-violent Gandhian demonstration that no one from the government had the guts to come to talk to the protesters. The persistent demand the protesting women raised was that someone in authority must come and talk to them. None ventured to do so. That is the measure of Shaheen Bagh’s achievement. Gender privileging went out through the window; discrimination was shown its place; India at its shining best was highlighted. And the world sat up and took note. There was not a global media outlet that did not cover the extraordinary 100-day women-led protest.

What was more, the women of Shaheen Bagh inspired students and youth to reinforce their cause. Their proximity to the horrors of the night of December 15, 2019 on the campus of Jamia Millia Islamia, of course, helped. But within days the struggle spread to campuses far and wide, where gender, faith or age did not matter: all that mattered was justice and human rights. Democracy and constitutionalism were proclaimed at the very moment they were threatened and the Delhi electorate showed that decent Indians do indeed subscribe to the “Idea of India” that brought us precious swaraj.

Where Parliament meekly surrendered to the brute majority; where political parties dithered and failed to coordinate or cooperate; where most of the media, especially the visual media, scorned the demonstrators; where no one from the government was authorized to stretch out a hand; where most politicians baulked at going out to Shaheen Bagh; where there was no leadership but the people’s leadership; where, uniquely, that leadership came from the so-called “weaker sex”; where reasoned argument in the shamiana was met by foul abuse and slander outside; where hunger and thirst were brushed aside: truly, into that Heaven of Freedom, my Father, did our sisters and mothers awake. This was the real Mother India.