Odia film lovers will finally get to watch the biopic Tulasi Apa. The movie has been creating ripples at various film festivals across the country and abroad since the past year. 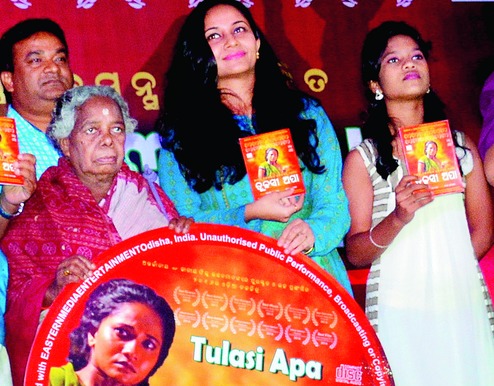 Bhubaneswar, May 9: Odia film lovers will finally get to watch the biopic Tulasi Apa. The movie has been creating ripples at various film festivals across the country and abroad since the past year.

The film based on the life and struggles of 69-year old tribal activist Tulasi Munda will hit the theatres on May 19. The music to the film was released at a city hotel this week. The event was attended by prominent personalities from the Odia film fraternity as well as Munda.

The director of the film, Amiya Patnaik, said the film would change the way people perceive Odia films. "I think the audience of this state will appreciate the efforts of the film-makers and it will also be successful in changing the perception that Odia films are mostly copied from other language films," he said.

Born in a very poor tribal family in Keonjhar, Munda was illiterate. As a girl, she worked in mines as a labourer and later took up a mission to educate children by opening a school for them. In 1964, she started an evening school for tribal children. Inspired by Vinoba Bhave when he visited Odisha in 1963, she started the school and used to sell mudhi and vegetables to gather funds to run it. At present, her schools provide education to students up to Class 10. The schools educate more than 500 students, half of whom are girls.

The film went to the floor after a year of research. "We had a separate team who lived with Munda to learn about her daily routine and about the challenges she has faced," he added.

The film marks the debut of actor Barsha Nayak, who has portrayed the role of the protagonist. She was selected after auditioning around 100 actors.

An MBA from Biju Patnaik University of Technology, she had a flare for acting since childhood. "The process was very challenging. She is an inspiration for many and knowing her was a boon for me," she said.

The film won six awards at the Odisha State Film Awards last year including the Best Director and Best Actress.

This movie is set in the birthplace and work domain of the Padma Shri recipient and has been shot in various places of the scenic Keonjhar district of Odisha.

The director plans to release a sequel to the film. "We have tried to portray the major milestones in this film. But, there is so much to narrate about her life that a second part is probable," summed up Patnaik.