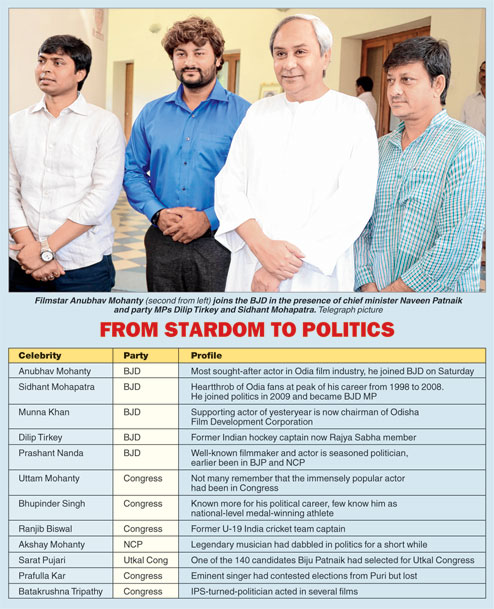 “I feel lucky to join the BJD and will be actively involved in campaigning for the party,” said the actor.

After gaining popularity right from his debut film I Love You in 2004 that was a box office blockbuster, Anubhav has been the numero uno hero in Odia film industry for the past few years.

The Cuttack lad had completed his schooling from DAV Public School in 1998 and studied Plus Two science and graduation in arts from Christ College.

Welcoming him to his party, Naveen said: “I am delighted that Anubhav Mohanty, the famous film star, has joined the BJD. This will give a tremendous boost to the party in the state, particularly among the young people of Odisha.”

There are speculations that the Cuttack boy might contest elections from the city. Significantly, no BJD stalwarts from the undivided Cuttack district were present when Anubhav was formally joined the party.

A visibly excited Anubhav said: “I am really blessed to join the party. Not only me, but also my entire family is fan of chief minister Naveen Patnaik. I should always work with those, who are actually working for the people.”

On being asked whether he would contest the next election, Anubhav gave a tacit reply: “I strongly believe that I am definitely going to work for the people. I really appreciate the BJD’s youth policy. It will motivate a number of youths to join the party.”

Sidhant Mohapatra, who has been a popular member in the party and always seen in the forefront during rallies and other party activities, said: “The BJD would invite more youths to join the party. With the help of the youth, we can bring a change in Odisha under the leadership of Naveen Patnaik.”

In the film industry, Anubhav had upstaged Sidhant as the number one actor. “Many film stars, not only in the state, but also in the country, have joined politics after working in the film industry. It is a great responsibility and a new role for me. Though initially there were talks of me joining politics a few years ago, things started to take shape in the past couple of days,” he said.

The 32-year-old actor is still single, but rumours that he is seeing actress Barsha Priyadarshini have been making rounds since the past six years. Speculations about the off-screen association of the pair comes from their hit on-screen presence. The pair has acted opposite each other in over 10 films, most of which were superhits. Anubhav’s last film Mo Duniya Tu Hi Tu was with Barsha as is his upcoming film for Raja, Hata Dhari Chalutha.

In Odisha, however, the trend is yet to catch up. Members of film industry such as Sarat Pujari, Prafulla Kar, Akshay Mohanty and Uttam Mohanty have played short stints in politics.

Interestingly, the move to usher Anubhav into the BJD came within nine days of the visit of actor-turned-politician and minister of state for tourism Chiranjeevi, who had announced he would be here to campaign for the Congress.

Apart from film actors, celebrities from other walks of life, mostly sportspersons, are also being roped in by political parties in the state.

Ace hockey player Dilip Tirkey joined the BJD in 2012 whereas athlete Bhupinder Singh is leader of Opposition from the Congress while cricketer Ranjib Biswal has been an active Congress leader.