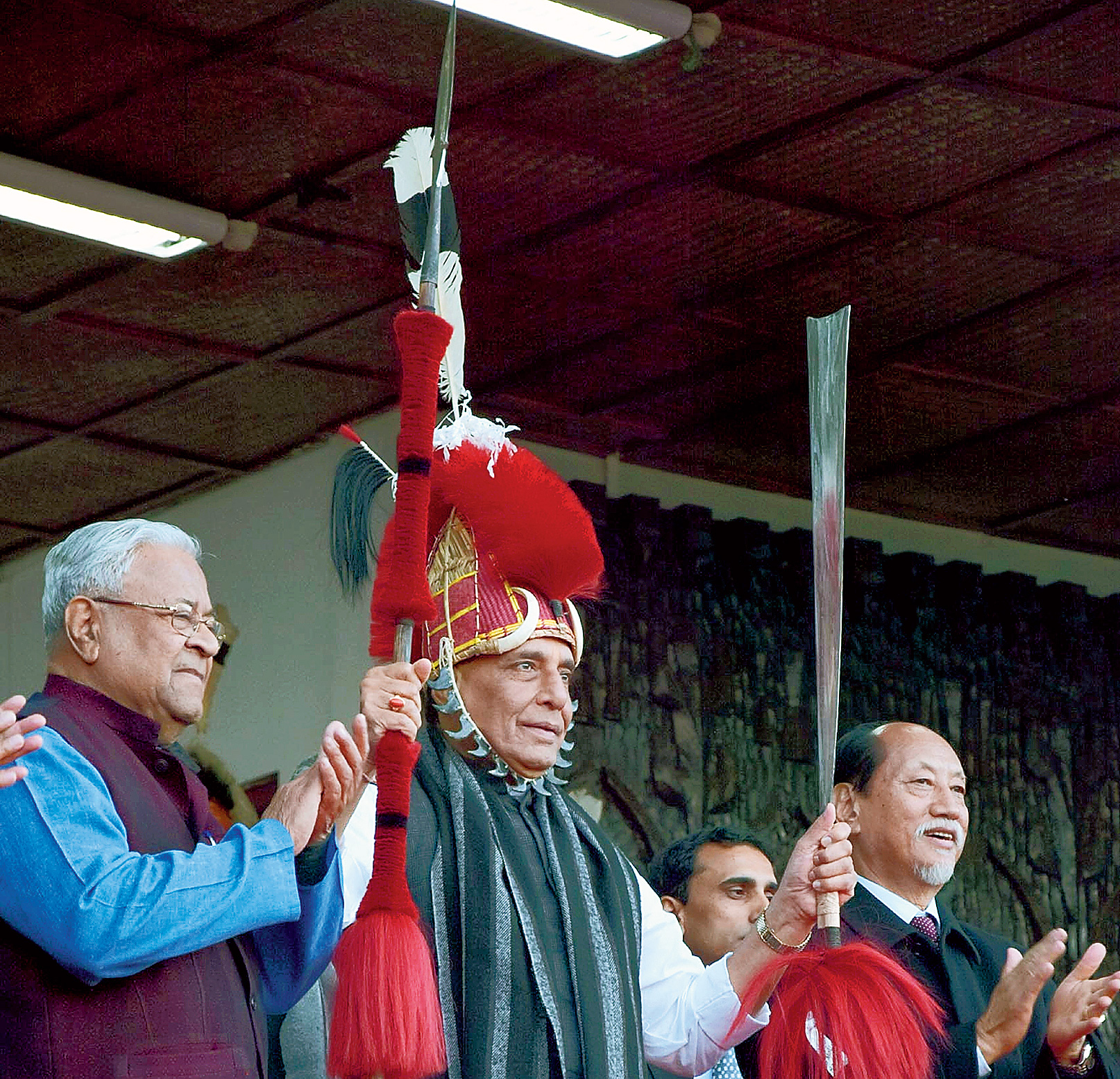 Union home minister Rajnath Singh on Saturday appealed to the people of Nagaland to create a conducive atmosphere for rapid economic growth as “the state has suffered a lot for long”.

Without referring to the decades-old insurgency problem in the state, Rajnath said everyone has a responsibility to create conditions so that the country can progress. He was inaugurating the annual Hornbill Festival near here.

“Nagaland has suffered for a long time. On the 56th anniversary of the state, I call upon all my friends of this state to take long strides for rapid economic growth of the country as well as Nagaland and make all of us contributors in making India a world power,” he said.

Rajnath said nearly 50 per cent of Nagaland’s population is below 25 years and it is they who will shape the future of India and of Nagaland. “We have to create conditions where their creative and entrepreneurial potential is unleashed to the optimum,” he said.

Rajnath said people must realise that the forces of change are inevitable and will not wait for anyone. “We have to be prepared for it. Only then we will shape the future according to our wishes. Otherwise, we will be shaped by these forces, may be even against our wish. The challenge of the day is to grasp and master these forces,” he said.

He said the Hornbill Festival offers a unique opportunity to different tribes of Nagaland to interact not only with one another but also with those from other states in the true spirit of Ek Bharat, shrestha Bharat.

“It demonstrates cultural diversity and civilisational unity. The festival shows how each tribe is unique in their cultural richness and yet there is an overwhelming sense of unity among all. This spectacular demonstration of unity in diversity is what India is all about. At the Hornbill Festival, I get a glimpse of the Indian spirit of happy and peaceful co-existence of the multiplicities,” he said.

Rajnath announced a pan-India single-number emergency mobile app and said it will have a special women-safety feature to get immediate assistance from police and volunteers.

A feature has been made available exclusively for women in the 112 India mobile app which is connected to the Emergency Response Support System (ERSS), he said, while launching the service in Nagaland.

“This app will assist the first responders in locating and tracking the woman in distress using GPS for effective response,” he said.

Rajnath congratulated the people of Nagaland, their government and Nagaland police for their efforts in launching the Emergency Response Support System (ERSS) project in Nagaland, the first state among northeastern states to commence it.

“Under the ERSS project, people will be able to receive immediate assistance from police, health and fire departments as well as from other agencies using a pan-India single emergency number 112,” he said. The ERSS has been integrated with police (100), fire (101), health (108) and women (1090) helpline numbers to provide emergency services through the emergency number '112'.