Assam PCC chief Ripun Bora said they have joined hands to remove the BPF, the BJP and the UPPL from the Bodoland Territorial Council 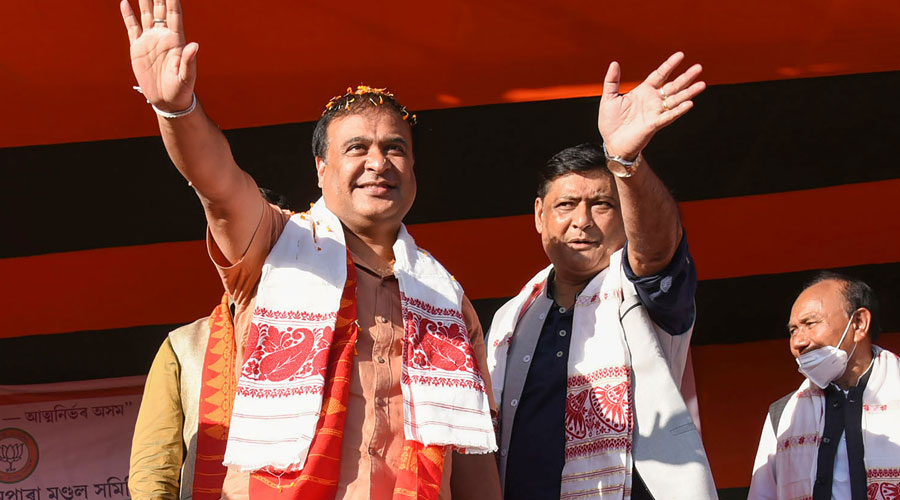 The Opposition Congress and the AIUDF on Wednesday addressed a joint political rally for the first time to muster support for the alliance’s candidates in the Bodoland Territorial Council polls in Assam, a significant political development because its outcome will have ramifications beyond the BTC.

Assam PCC chief Ripun Bora and AIUDF president Badruddin Ajmal addressed a total of four rallies during the day for the December 7 and 10 polls. They started at Mudaibari constituency in Udalguri district, hopping from one constituency to another in a chopper, something which only senior state cabinet minister Himanta Biswa Sarma has been doing regularly since October-end.

The Congress’s alliance with the AIUDF was decided nine months ago even before the talks of a proposed grand alliance involving the two parties, the Left and regional parties started doing the rounds.

The alliance is also significant because there is opposition from within the Congress on any direct truck with the AIUDF as it may impact the party’s prospects in the Brahmaputra Valley in next year’s Assembly polls. The AIUDF was formed in 2005 after Ajmal fell out with former chief minister Tarun Gogoi, denting the Congress’s dedicated minority vote bank.

Ajmal said at one of the rallies on Wednesday that it was the first time they were sharing a stage forgetting “our” past, a sign of the proposed mahagathbandhan (grand alliance) for the Assembly polls taking shape from the BTAD to unseat the ruling BJP alliance. “Our mahagathbandhan will solve all your problems, not the BJP. Te Congress is our Big Brother and we will work together,” Ajmal said.

The Left and the new regional parties are also for a united front to take on the BJP.

Bora said they have joined hands to remove the BPF, the BJP and the UPPL from the BTC. “I promise there will be no council without the Congress and the AIUDF. We will hold the key to the formation of the council,” he said.

The alliance will see Congress contest 13 seats and the AIUDF seven in the 40-member council which has been ruled by the Bodoland People’s Front since its inception in 2005.

Assam PCC general secretary and senior spokesperson Durga Das Boro told The Telegraph that the BTC polls will be an “acid test” for the party, the state leadership and the proposed grand alliance to take on the well-entrenched BJP in the 2021 Assembly polls.

“We are dealing with the polls with the seriousness it deserves. The result will have an impact beyond the BTC and the grand alliance involving the AIUDF. Everyone has been urged to contribute to the party and the alliance’s victory. It is undoubtedly an acid test for us and the three of us — myself as BTRCCC chairman, the PCC chief and Assam in-charge Jitendra Singh. This will be our first BTC polls,” Boro said.

The BJP and its ally AGP have gone all out against the proposed grand alliance, raking up the illegal Bangladeshi bogey, an emotive issue in the Brahmaputra Valley.

The AGP on Wednesday said that the issue would affect the Assamese and its culture.

However, one key reason the ruling dispensation is against the grand alliance is the vote share the Congress and the AIUDF command. Together with small and regional parties they could be a potent threat, the Congress and AIUDF leaders said.

In the 2019 Lok Sabha polls, the BJP won seven seats while the Congress and the AIUDF bagged three and one seat respectively. The BJP polled 83,24,083 votes, the Congress 63,08,928 and the AIUDF 4,84,560. The BJP enjoyed a comprehensive edge but then the voting pattern in a general election is different from state polls, said a Congress leader.

The Congress had drawn a blank in the 2015 BTC polls while the AIUDF had won four seats.

Congress insiders said the party has lost a lot of ground since the birth of BPF which was the party’s ally at Dispur before it joined hands with the BJP before the 2016 Assembly polls.

This time, however, the BPF finds itself in a spot, challenged as it is by its ally BJP, the United People’s Party Liberal and the Congress-AIUDF alliance. The BPF is contesting 37 seats, the BJP 26 and the UPPL 40. Presently, the council is under governor’s rule.