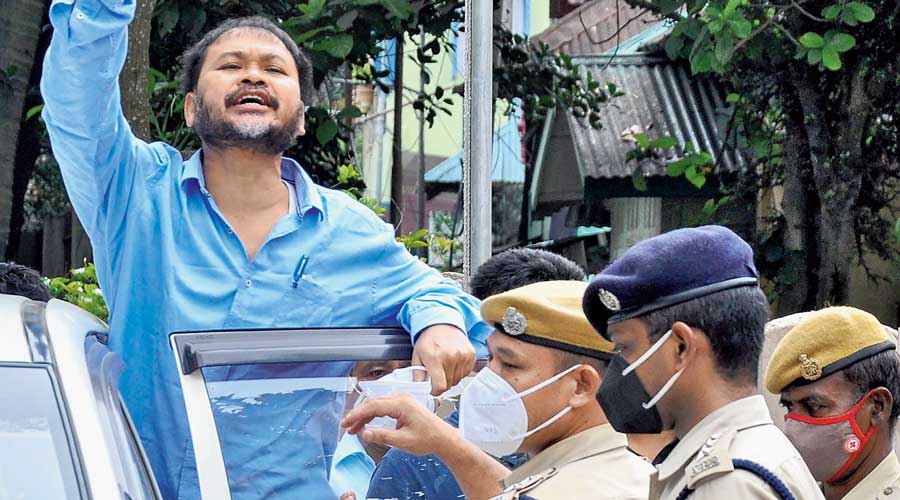 The most high-profile case linked to the anti-CAA protests in the Northeast has collapsed.

Akhil Gogoi, the anti-CAA crusader who won an election and became an Assam MLA while being in judicial custody, was cleared of all charges by an NIA court here on Thursday. He had been charged with sedition and under sections that figure in a terror-related law.

Now the Sivasagar MLA, Gogoi, who spent 18 months in captivity from December 2019, walked out of Gauhati Medical College and Hospital, where he was being treated under judicial custody for various ailments since July last year.

Gogoi told The Telegraph on Thursday night that the verdict had fuelled hopes among activists facing “false” sedition and UAPA charges and languishing in jails elsewhere in the country.

“Union home minister Amit Shah, Assam chief minister Himanta Biswa Sarma and the NIA DG should resign following the dismissal of both the NIA cases against me,” added Gogoi, a former leader of a peasants’ organisation and the incumbent head of the Raijor Dal.

Three of his close aides — Dhaijya Konwar, Manas Konwar and Bittu Sonowal — were also discharged in the case.

The special NIA court in Guwahati said there were no “prima facie materials” to frame charges against the accused.

“The materials are also compatible with the innocence of the accused persons — which is one of the principles to be looked at by the court at the time of considering the point of charge,” the court said in its 120-page order while disposing of the case and discharging all the accused.

Gogoi, 46, and two other accused had earlier been discharged in another NIA case in Dibrugarh district on June 22. He has also obtained bail in 11 other cases that had been lodged against him. The NIA case that was dropped on Thursday had been the only one keeping him in judicial custody.

Thursday’s court order relates to a case lodged at Chandmari police station in Guwahati in 2019. The case was subsequently taken over by the NIA, which functions under the Union home ministry.

The FIR lodged at the police station had accused Gogoi and the three others of having Maoist links and conspiring to “incite hatred and disaffection towards the government” by using the passage of the Citizenship Amendment Bill as a pretext, and promoting enmity among different groups of people.

The NIA chargesheeted the four, booking them for sedition; attempting to bring into hatred or contempt disaffection towards the government; promoting enmity between different groups on grounds of religion, race, place of birth, residence and language; making imputations and assertions prejudicial to national integration; and under sections of the Unlawful Activities (Prevention) Act, which is invoked in terrorism cases.

The NIA court observed that law-enforcement agencies have to “take care” to see that the implementation of the UAPA remains within the “strict parameters” of the law and does not get “stretched” beyond permissible limits “imposed” by the statute itself and the principles laid down by the Supreme Court and various high courts. The agencies should also be “sensitised and trained” continually, the NIA court said.

Immediately after his release, Gogoi termed the verdict “historic”.

“I lost more than 18 months. I thank the judiciary for having dismissed the NIA charge and I request the NIA chief to resign. The cases have destroyed my family but I will continue to raise my voice in the interest of Assam and the people of Sivasagar who ensured my victory in the Assembly polls even though I was in judicial custody,” he said.

Gogoi visited the Guwahati residence of Sam Stafford, a Class X student who died in police firing during the anti-CAA movement, and vowed to ensure justice for the family and other protest victims.

From there, Gogoi went to the offices of the Krishak Mukti Sangram Samiti and the Raijor Dal in Guwahati and addressed a media conference.

“I will not remain silent. I warn the government to check corruption and price rise. I will work to provide relief to Covid-hit vendors, cab drivers, artistes and farmers,” he said.

Mukut Deka, general secretary of the Krishak Mukti Sangram Samiti, a peasants’ body founded by Gogoi in 2005, told this newspaper: “The NIA case has shown that the government is using central agencies to suppress Opposition voices. The NIA court ruling proves this. The ruling is a victory for the people and of democracy.”

Bhasco D. Saikia, Raijor Dal working president, said the court order had proved that the NIA was being used to derail the anti-CAA movement in Assam.

Call in Assam for unity against BJP